Ima Hogg. (Fact is always stranger than fiction, she was the daughter of
Texas Governor James, Steven Hogg.)

You may have to work on
deciphering the problem with one or two of the names.  For instance Guy
struggled with Dwayne Pipe until Will helped with with the unusual 'r'
stress on the 'w'.  I will
say no more in case I deprive you of pleasure from working out the meanings of these unfortunate,
stupid and weird
children's names for yourself.

* Nosmo King was the stage name of the 1920's actor H Vernon Watson.

* Shanda Lear is the daughter of Bill Lear who invented the Lear Jet.

Will and Guy's Top Ten Funny, Silly and Downright Inconsiderate
Names, this selection makes us laugh:

Will's wife used to teach at a school in Surrey, England, where there
was a family named, Brain.

The father was Ivor Brain and the children were - A. Brain and
P. Brain. Go on - say the names out loud.

Girls have an extra hazard, they could marry
a man with a tricky surname.  For example, Annette Brown marries Joe Curtain (Kirton) and becomes A Net Curtain.  There was also Penny Farthing who married Mr
Halfpenny.  Two farthings made one half penny in old English money.

Sent in by a reader who went to school with - Dinah Drain!

There is a Zulu tradition to name children after events that occur near
their birth - fair enough.  However, Will and Guy pity these poor
children who have been given these unfortunate names following the 2010
World Cup in South Africa.  Coach Sibise, Stadium Gumbi, Tickets
Ngubane, Kick-off Shabalala Red-card Mbatha and Park n Ride Khumalo.  We also wonder about the father of
Offside Mchunu and the mother of Substitute Shandu.

In Houston, Texas, we had a lovely lady named Ima Hogg. One simply
did not make fun of her name because she was very rich and very generous
supporting worth-while causes as her father did. Rice University was one
of her charities.

Of course, there were a few that said she had a sister named Bea
Hogg. and A brother named Eura Hogg.

(Kindly sent in by Leigh Eaton)

The funniest names in Britain have been revealed in a new and recent
study and include Terry Bull. Interestingly, Will and Guy have a friend,
who lives in Portchester, named Terry Bill who has suffered all his life
from Mickey taking.

A former Royal Air Force man, Stan Still, 76, was also named along
with Barb Dwyer, Max Power, Justin Case, Mary Christmas and Paige
Turner, we can report. Stan Still, from, Cirencester, Wiltshire, England
commented, 'When I was in the RAF my commanding officer used to shout
"Stan Still! Get a move on" and roll about laughing. It got hugely
boring. My name has been a blooming millstone around my neck.'

A spokesman for the site which compiled the study, told us, 'Parents
need to think carefully when choosing names for their children. What's
quirky and fun for a toddler might be regretted when the person is
older.'

Recent research carried out by Professor Richard Webber [King's College,
London] has brought to light an interesting and puzzling conundrum say Will
and Guy.

It has been noticed that many "old" British surnames have been
disappearing in recent years; old names which have been used for generations
are being lost. We think the reason maybe that in modern times people have
become increasingly embarrassed to hold "funny" and unusual names that may
make other people laugh.

Names like: Daft, Death, Smellie, Gotobed,
Shufflebottom, Willy, Nutters, Piggs and Jelly have declined seriously in
the past century or so. We imagine that these people have changed their
names to something innocuous.

the fastest-growing surname in Britain is Zhang, which has grown from 123 in
1996 to 5,804 in 2008. It is closely followed by four other Chinese names:
Wang, Yang, Huang and Lin; only after that do a couple of African names get
a look in: Moyo and Dube.

Some things have not changed, however. In 1881 the most popular surnames
were, in order, Smith, Jones, Williams, Brown, Taylor, Davies, Wilson, Evans
and Thomas; those top nine names are still in the exactly the same order of
popularity today.

Shy, Unity and Bean are just some of the particularly unusual names
British parents have given their children over the past 10 years, it's been
revealed. The bizarre monikers emerged after researchers trawled through the
millions of recorded names given to newborns since the year 2000.

Other off-beat names in the top 20 list include Zowie, Puppy and Ice.
There are also a handful of unusual hippy-style names such as Stone, Gift,
Heaven and Echo, while the fashion world might have inspired the names
Denim, Diesel and Armani.

In what can be the only solace in having one of these odd names, at least
you're less likely to meet too many people with the same name as them. That
would just be embarrassing.

From the list we present to you our top 10 most curious, funny and strange names:

A spokeswoman for Bounty.com, which conducted the study, told us, 'Our
records have uncovered these unusual name choices of parents over the
decade, illustrating the ever growing trend for wackier, celebrity-style
names not previously heard of in Britain's playgrounds. It's great to see
parents being creative and wanting their children to stand out from the
crowd with more unusual names but there are a few names here that children
may find hard to live up to.'

Will and Guy would certainly agree with the final sentiment.

Then there was Mr and Mrs Brain, who had a pet rabbit called Hare.

Will and Guy's List of Strange,
Unusual and Occasionally Funny Surnames:

What's
in a Name?

Mrs Warren was discussing the origin of names with her
Primary pupils. The 7 year olds were keen and enthusiastic learners and quickly grasped the notion that somebody named Taylor may well have had ancestors in mediaeval times who were makers of clothing.  A family
name of Baker suggested that in the middle ages their predecessors might have baked bread.  First names were talked about: the name William belonged to the heir to the throne of Britain and it meant 'conqueror'
as in the Norman invader 'William the Conqueror'
in 1066.

One lad raised his hand and spoke, 'Please, Miss. I was named after a wall.'

'And what is your name, young man?'
asked Mrs Warren. 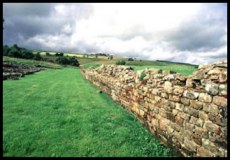 The Roman Emperor Hadrian [AD117-138] felt that his Empire was growing too large. He ordered this wall to be constructed in Northern Britain. It runs for 73 miles and is estimated to be
between 13 and 15 feet high. Hadrian wanted a wall built which would mark the northern limits of his empire and consolidate the hold on those parts of Britain already subdued. Hadrian's
empire would not include
Caledonia. [Scotland]. Although the Roman Army was strong enough to defeat the Picts who lived in Caledonia, Hadrian felt that the rough terrain and the guerrilla tactics employed by the Picts made the
conquering of Scotland not worth his while.

What's in a Name - Latest Research

Studies by Richard Wiseman and others have shown that pupils with
'successful' names get higher marks, and succeed in school, compared with those
with 'unsuccessful' names.   Will and Guy say that while such
psychology probably is true, it needs to be put into context.  For example,
in Wales (home of Dylan Thomas), Dylan would be a normal name.  But if Dylan
moved to England they may call him Dull'un.

Nevertheless, in a large survey trends may be significant, for instance,
Jack, James and Ryan are good, successful names for boys, and Lucy, Elizabeth and Sophie for
girls.  However, Brian, Thomas and George were not highly rated by this
survey, neither were Lucy, Tracey or Ann.

Another factor is age.  Names that are popular in one era, sound
old-fashioned two generations later, for example, Florrie, Agnes and Constance
would seem like unfortunate children's names in 2008.

A policeman pulled over a teenage girl for a traffic violation
in Montana.

As the officer thought that she was 'taking the Mickey', he questioned her more closely.  However, a phone call to her father, and he produced the documents to prove that she was
indeed Betsy Ross, born on 7/4/1990**.

(* According to Legend Betsy Ross sewed the first American Flag.)
(** 4th of July in American date notation.  In Montana it's
legal to drive at 15.
In Dakota the driving age is as low as 14.  However, I understand that at least in some states, drivers under 18 cannot take passengers, unless one passenger is over 25.)

A man called Russell has changed his surname by *deed poll to Sprout. Here is
a photo of Mr Sprout.

Russell Sprout, 26, from Ocean Village, Southampton, Hampshire, UK, dislikes
the taste of Brussels sprouts and hasn't eaten one for years. 'Sprout was always
my nickname and my friends dared me to change my surname to Sprout,' he told the
Daily Echo. 'In the end, I thought why not? I dropped my middle name, which was
James, so I am just Russell Sprout. I have got rid of the chance of having a
rubbish nickname now because everyone just calls me Sprout and I like that.'

Russell, a council tax officer, added, 'Some people actually take it seriously
and don't really bat an eyelid, they just don't get it. But most people will
say, 'say that again', or they will laugh. I get all sorts of responses.'

* In the UK it is possible to change your name by deed poll. This will cost
£7.50 [$14.90 USD]. This has been possible since 1760; a decade or so ago only
15,000 people took advantage of it but now more than 40,000 people seek to
change their names each year. Applications are up by some 20%. Divorcees
sometimes wish to change their names back to their maiden name. Civil
partnerships, marriages and immigrants sometimes create a new 'meshed' name from
their two surnames.

Interesting changes are not always allowed: Samantha Holloway wished to become
HMP Holloway [Her Majesty's Prison] but the UK Passport Office refused to issue
her a passport in that name.

The above are infinitely superior name changes than these unfortunate names

The teenager, from Glastonbury, Somerset, England, added that while he
thought the new name was 'crazy', and that his grandmother was no longer
speaking to him. Why are we not surprised?

He joins a number of people with unusually long names, including
Rhoshandiatellyneshiaunneveshenk Koyaanisquatsiuth Williams, a girl born in
Texas in 1984.

Also, in Italy, we have discovered, a couple was banned from naming
their son Friday, Venerdi, because the name could expose him to ridicule.
Named after the manservant of Daniel Defoe's famous novel 'Robinson Crusoe',
the court ordered the boy's name be changed to Gregorio, named after the
Saint's day on which he was born.

Meanwhile, a judge in New Zealand made a young girl a ward of court so
she could change her name from Talula Does The Hula From Hawaii: and last
year a couple were banned from naming their baby 4Real,
so they chose Superman instead.

And There Are Yet More Weird Children's Names

Portsmouth Football Club has a supporter who never misses a match home or
away. He is so dedicated to supporting the football club that he has changed
his name. It is

Will has met John, who owns a bookshop in Petersfield, Hants, England,
when selling some books. At football matches he is very noisy, ringing a
hand bell and bellowing his support. 'In real life' he is a much more
gentle, learned person.

The Maori name for a hill in New Zealand so Will and Guy believe is:

Now, that is a long word. You may know of a longer one, if so please let us know.

Appendix - Ideas For You To Generate More Unfortunate Children's Names!

Footnote:
Please send us your examples of unfortunate, but funny children's names.