We have a wide variety of funny bird stories, furthermore, these avian tales are
interspersed with funny bird pictures and information that Will and Guy find
interesting.

Elvis has a New Pair of Blue
Shoes

While they are not suede,
they will keep the little blue penguin's feet dry and infection-free. Elvis and 16 other little blues who arrived at the International Antarctic Centre in September have been given specially designed shoes
after several penguins developed sore feet in their new home. Brought from Napier's Marineland to take centre stage at the Antarctic Centre's Penguin Encounter display, the penguins are "second-chance" birds.
Many have disabilities due to injuries.

Antarctic Centre director Richard Benton said some of the penguins had developed sore feet, which had proved "tricky" to treat. Veterinarian Pauline Howard had
suggested rubber shoes. Snugly tailored, with a springy sole, the shoes are available in kelp green or penguin blue - to complement any penguin tuxedo.

Hen Pecked Bird Gets His Own Back 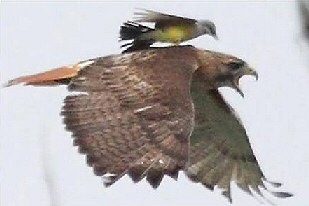 Photographed here is the moment a tiny but very angry *Kingbird hitched
a piggyback ride on a red tail hawk.  The feisty flyer began
attacking the bird of prey after it ventured too near its nest. Pat
Gaines, 41, captured the amazing moment at Bonny Lake park in Colorado,
USA. 'I've never seen a hawk harassed so much. The Kingbird pecked at its
head as the hawk flew away screaming,' she informed Will and Guy.

* The genus Tyrannus is a group of large insect-eating birds in the
Tyrant flycatcher family Tyrannidae. The majority are named as Kingbirds.
They prefer semi-open or open areas. These birds wait on an exposed perch
and then catch insects in flight. They have long pointed wings and large
broad bills. These birds tend to defend their breeding territories
aggressively, often chasing away much larger birds as we can see from the
story, above. The name of this genus means "tyrant".

Another Way of Dealing With Hen Pecking

A pilfering seagull has turned shoplifter by wandering into a store and helping himself to his favourite crisps. The fearless bird lies in wait every day and pounces at a corner shop in Aberdeen, Scotland,
when the door opens. He sneaks in, grabs his spicy Doritos, then flies off with them in his beak and shares them with other birds. 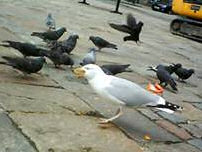 The seagull, nicknamed Sam by staff and customers, has become so popular locals
have started paying for his crisps.

Shop assistant Sriaram Nagarajan reported: 'At first I didn't believe a
seagull was capable of stealing crisps. But I saw it with my own eyes and I was
surprised. He's very good at it. He's becoming a bit of a celebrity. Seagulls
are usually not that popular but Sam is a star because he's so funny.'

See picture above right, Sam Seagull and his pals eating the 'stolen' Doritos.

'Hey - are you thinking what I am thinking?' 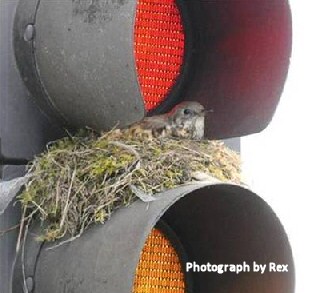 A pair of mistle thrushes have set up their nest between the red and
amber of traffic lights in Doncaster, Yorkshire, England.

Will believes that the birds are cunningly using the warmth from the
red light to help incubate their eggs.

Guy thinks that the pair are just waiting for the green light, then
they will take their nest to the Doncaster council offices.

Amusing Alex, The Barman and The Ostrich

Alex walks in to Buck's Bar with an ostrich behind him, and as he sits
down, Buck, the barman, comes over and takes their order.

'I'll have a beer also,' replies the ostrich.

The bartender pours the beer and says, 'That will be £4.60 please.'
Alex reaches into his pocket and pulls out the exact change for payment.

Once again the man reaches into his pocket and pays with the exact
change.

This becomes a routine until, late one evening, the two enter again. 'The
usual?' asks the barman 'Well, it's close to last orders, so I'll have a
large scotch,' asks Alex.

'Same for me,' says the ostrich.

'That will be £6.45,' says Buck. Once again the man pulls exact change
out of his pocket and places it on the bar The bartender can't hold back his
curiosity any longer. 'Excuse me sir. How do you manage to always come up
with the exact change out of your pocket every time?'

'Well,' answers Alex genially , 'several years ago I was cleaning the
attic and found an old lamp. When I rubbed it a Genie appeared and offered
me two wishes. My first wish was that if I ever had to pay for anything, I
just put my hand in my pocket, and the right amount of money will always be
there.'

'That's brilliant!' retorts the Buck, warming to the subject. 'Most
people would wish for a million dollars or something, but you'll always be
as rich as you want for as long as you live.'

'That's right. Whether it's a gallon of milk or a Rolls Royce, the exact
money is always there,' comments Alex.

The barman then asks, 'One other thing, sir, what's with the ostrich?'

Alex replies, 'Oh, my second wish was for a chick with long legs!'

Darnay Duck walks into a pub and orders a pint of lager and a ham
sandwich. The landlord looks at him and exclaims, 'But you're a duck!'

'Your eyes work,' replies the Darnay Duck, wryly.
'And you talk.'
splutters the landlord.
'And your ears,' continues Darnay Duck, 'Now can
I have my beer and my sandwich please?'

'Certainly,' agrees the landlord, 'sorry about that... it's just we don't
get many ducks in this pub. What are you doing round this way?'

'I'm working on the building site across the road,' explains the duck.

The landlord watches, astounded, as Darnay Duck drinks his beer, eats his
sandwich and leaves.

The duck visits regularly for two weeks. Then one day the circus comes to
town. The owner of the circus comes into the pub and the landlord says to
him, 'You're with the circus aren't you? I know this duck that would be just
brilliant in your circus - he talks, drinks beer and everything.'

'Sounds incredible,' says the owner, 'get him to give me a call.'

So the next day when Darnay Duck comes into the pub the landlord says,
'Hey Mr Duck, I reckon I can line you up with a top job, paying really good
money.'
'Yeah?' questions Darnay, 'Sounds great, where is it?'

'At the circus.' Answers the landlord.
'The circus?' Darnay Duck
enquires, rather bemused.

'That's right,' replies the landlord.
'What, the place with the big
tent? Big canvas roof, hole in the middle, loads of animals?' asks the duck.

Darnay Duck looks confused. 'Why would they want a plasterer?'

Flamingos usually lay just one large egg.  It takes about a month
for the chick to incubate.  The chick's mother and father each take
turns to incubate the egg.  Just before they hatch the chick starts
squawking, this is the signal for the parents to help by breaking the egg
from the outside.

After about a week of feeding from its parents, the flamingo chick looks
funny, but it's ready to walk.  The young flamingo develops quickly and
can swim before it leaves the nest, which is typically about a week after
hatching.

A Funny, Silly, Short Story of Pippa the Cockatoo

Pippa, a confused
cockatoo at a wildlife sanctuary, has been protecting a bowl of chocolate
eggs in Nuneaton, Warwickshire, England, since she was taken outside and saw
them on a table.

Her owner, Geoff Grewcock, said, 'She went straight
over, climbed on the creme eggs and that was it. She thinks they're her
eggs. Until she clicks they're not real eggs, we'll just leave her there.'

The 17-year-old cockatoo, who has been at the sanctuary for about four
years, is expected to live until the age of 70 and has so much character
it's unbelievable Will and Guy have discovered. Apparently she dislikes men
and we learned of a tale where Pippa once bit the neck of a builder who, she
thought, was threatening "her eggs". Mr Grewcock had to prise Pippa's beak
off his neck.