William Dalrymple was born in Scotland and has become
an internationally acclaimed writer of many travel books.  He wrote a book, at the age of 22, called 'In Xanadu'
which was published in 1989.

In his book Dalrymple recorded various experiences he and his companion had
while travelling in Asia; this example is a menu he came across in a restaurant.  It's
a wonderful example of how to mangle English and is best appreciated by reading it out loud.  However, the funny English idioms can be deciphered, even better, bet the food was delicious. 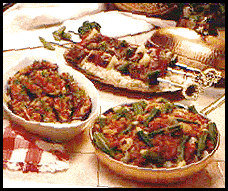 Cacik -- a drink made ay ay

A sweet dish of thinsh of batter with butter

The above restaurant correction reminds me of the
reverse story.  A man sent his wife into a Chinese restaurant to ask for 20 No 6.  Instead of returning with one packet of cigarettes, she came out with 20 portions of egg fried rice.

Pigeon's milk is one of the desserts on offer at a Latvian restaurant. According to the Daily Mirror, the menu also offers a main course of 'grilled surgeon'.

Here are some Indian English funnies that arise from
shortening English words.

We have found a further amusing example of the way in which the English language can be mangled. These funny English idioms apparently first appeared in the New Yorker magazine in the 1980's
and is an attempt by Bodrum
airlines of Turkey to translate their regulations into English for inclusion on their passenger tickets. Despite their problems with the language nearly all of these can be understood.

1) You do not get
rezarvation with Bodrum Airlines.

2) Your ticket cann't
bu used if you be late or you miss departure time.

3) Bodrum Airlines is able to cary all passengers and baggeces but if any unusual things happen
the can pany can change schadule or find another aircraft or company.

5) Do not allawe to drink
alcaol and smoke cigarets on board.

7) You can not give back your ticket, but, if you annonce us before 24 hours your depart that you
cannot fly you can use your ticket with in one year. After passing one year, you can not fly with your ticket.

8) If someone gets ticket by doing tricky, Bodrum Airlines has rezerved the rights that there
is no must to give a permation that passenger gets on the board.

10) Pragnent and sick people have to have doctor's
permetion that they can
get on the board.

12) You have to get in touch with contuar befe 30 mitutes of the departure, atherwine you don't
get on the board and you don't
have any rights for justice.

Footnote:
Please send us your examples of funny English idioms.