A man was driving along the highway when saw the Easter rabbit hopping across the middle of the road.  He
swerved to avoid hitting the rabbit, but unfortunately the Easter bunny jumped in front of the car and was struck by his car.

The basket of eggs and candy, the rabbit was carrying, went flying all over
the place. The driver, being a sensitive man, as well as an animal lover, pulled over to the side of the road, and got out to see what had become of the rabbit carrying the basket. Much to his dismay, the
colourful rabbit was dead. The driver felt so awful, he began to cry. 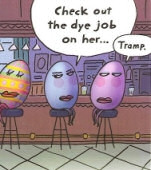 A woman driving down the highway saw the man crying on the side of the road and pulled over. She stepped out of her car and asked the man
what was wrong. 'I feel terrible', he explained, 'I accidentally hit the Easter rabbit and killed it. Children will be so disappointed. What should I do?'

The woman told the man not to worry. She knew
what to do. She went to her car trunk, and pulled out a spray can. She walked over to the dead, limp rabbit, and sprayed the contents of the can onto the furry animal. Miraculously the Easter rabbit came to
life, jumped up, picked up the spilled eggs and candy, waved its paw at the two humans and hopped down the road. 50 metres away the Easter rabbit stopped turned around, waved and hopped down the road. 50 metres
further on, he turned again, waved and hopped another 50 metres, again he waved.

The man was astonished. He couldn't
figure out what substance could be in the woman's
spray can. He ran over to the
woman and asked, 'What is in your spray can? What did you spray on the Easter rabbit?'

The woman turned the can around so that the man could read the label. It said: 'Hair spray. Restores life to dead
hair. Adds permanent wave.'

Fluffy and Cedric -
Bunny Story With a Moral

Fluffy, the orphan bunny and Cedric the orphan snake lived in the forest;
they were, by an amazing coincidence, both blind from birth.

One morning, bright and early Fluffy was hopping through the forest when he
tripped over the body of Cedric who was basking in the sunlit undergrowth.
Fluffy landed quite hard on the prostrate body of Cedric.

'Crikey,' exclaimed Fluffy the bunny, 'I'm so sorry. I didn't mean to squash
you. I've been blind since birth, so, I can't see where I'm going. In fact,
since I'm also an orphan, I don't even know what creature I am.'

'That's OK, mate,' commented Cedric the snake. 'Actually my story is much the
same as yours. I, too, have been blind since birth and also never knew my
mother. Tell you what, maybe I could slither all over you and work out what you
are, so at least you'll be able to find that out.'

'What a marvellous idea,' replied Fluffy the bunny.

So the Cedric slithered all over Fluffy and said, 'Well, you're covered with
soft fur, you have really long ears, your nose twitches and you have a soft
cottony tail. I'd say that you must be a bunny rabbit.'

'Oh, thank you, thank you,' cried Fluffy with tremendous pleasure. Then
Fluffy the bunny suggested to the snake, 'Perhaps I could be allowed to feel you
all over with my paw and help you the same way that you've helped me.'

So Fluffy the bunny felt Cedric the snake all over and summarised, 'Well,
you're smooth and slippery, you have a forked tongue and no backbone.  I'd say
you must be either a team leader or possibly someone in senior management.'

A Fairy Story for Easter

Once upon a time there was a good old woman who lived in a little house.
She had in her garden a bed of beautiful striped tulips.

One night she was awakened by the sounds of sweet singing and of babies
laughing. She looked out at the window. The sounds seemed to come from the
tulip bed, but she could see nothing.

The next morning she walked among her flowers, but there were no signs of
anyone having been there the night before.

On the following night she was again wakened by sweet singing and babies
laughing. She rose and stole softly through her garden. The moon was shining
brightly on the tulip bed, and the flowers were swaying to and fro. The old
woman looked closely and she saw, standing by each tulip, a little Fairy
mother who was crooning and rocking the flower like a cradle, while in each
tulip-cup lay a little Fairy baby laughing and playing.

The good old woman stole quietly back to her house, and from that time on
she never picked a tulip, nor did she allow her neighbours to touch the
flowers.

The tulips grew daily brighter in colour and larger in size, and they
gave out a delicious perfume like that of roses. They began, too, to bloom
all the year round. And every night the little Fairy mothers caressed their
babies and rocked them to sleep in the flower-cups.

The day came when the good old woman died, and the tulip-bed was torn up
by folks who did not know about the Fairies, and parsley was planted there
instead of the flowers. But the parsley withered, and so did all the other
plants in the garden, and from that time nothing would grow there.

But the good old woman's grave grew beautiful, for the Fairies sang above
it, and kept it green; while on the grave and all around it there sprang up
tulips, daffodils, and violets, and other lovely flowers of spring.

A rabbit raced a turtle -
I'm sure you know who won.
Mr Rabbit came
in late -
A little hot cross bun!

Easter Bunny has Near
Death Experience 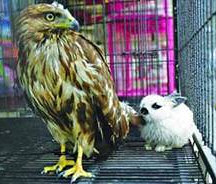 An eagle and rabbit have become the best of friends. Here is an unlikely
Easter Bunny story from Zhengzho City, China. It was feeding time for the eagle
so the owner put the Easter bunny in the big bird's cage. Amazingly, instead of
following its predatory nature, the eagle befriended the rabbit. Can you put
yourself in the grateful bunnies socks? I had a near death experience, now I am
a pampered star.

The owner said, 'The rabbit very humbly combs the eagle's feathers with its
mouth. The eagle is four-months-old, and I threw him the rabbit for food, but
apparently he doesn't know how to enjoy his meals.' 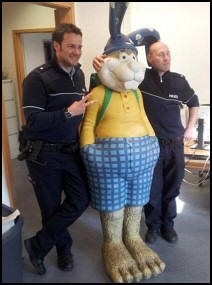 Statue Arrested in Germany
Will and Guy have noticed
that Police have arrested a large Easter Bunny statue in Duisburg, Germany
after homeowners reported a 'stalker' staring into their window.

The couple contacted authorities after seeing a figure with a "striking"
face about 1.8 metres (6ft) tall peering in, to their house. They then
described to police that the offender was wearing a yellow shirt, blue check
trousers and a green backpack.

When the police arrived on the scene to apprehend the stalker, they were
faced with a 6-foot statue of the Easter Bunny.

One officer told us, 'We took him into custody but he hasn't said much
yet.'

The police believe the bunny was placed outside the couple's home as a
practical joke, and will keep the bunny detained until his owners come and
collect him.

Six kittens abandoned by their mum have found an unlikely replacement - a pet
rabbit. The tiny kittens were left all alone after their mum decided she
couldn't be bothered feeding them. They were taken in by veterinary nurse
Melanie Humble, who thought her own cat would mother them, but instead they're
being cared for by her rabbit, 'Summer'. 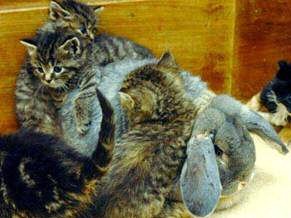 Now, they've fallen in love with their surrogate mum and refuse to leave her
alone. Melanie, 29, from Aberdeen, Scotland said, 'It's amazing to see, for some
reason they just took to the rabbit instantly and thought she was their mum.
They started climbing all over her and were looking to get milk from her. She
just sat there and let them do it. Now they follow her everywhere. They can't
bear to be without her. They're all so lovely together.'

Story of the Miracle Bunny

Jimmy came home that evening after a long day in the classroom and to his
horror he found his German Shepherd, Rex, with next door neighbours bunny rabbit
in its mouth. The rabbit was obviously dead.

Greatly upset, Jimmy panicked thinking, 'If my neighbours find out that Rex
killed their bunny, they'll hate me forever.' Jimmy quickly took the rather
large bunny, and, placing it in a paper bag deposited in the local incinerator
tip. On his way home, Jimmy looked into Pets 'R Us and bought a rabbit which he
gauged was just like the deceased. Back home, Jimmy took the 'new' rabbit and
placed it in the open hutch in his neighbours garden.

Later that evening, Jimmy heard a knock on his front door and opening it he
found his next door neighbours bearing the 'new' rabbit in their arms.

'Look,' squeaked his neighbour, 'Yesterday Billy was dead and we buried him 4
feet down in the garden. Today we come home and find that not only is he alive
and well but he has grown several more teeth but also he has shrunk. It's a
miracle.'

Story based on a true story about a mouse owned by Will's wife when she was a
child. 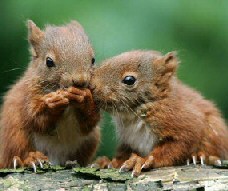 Squirrels had overrun three churches in Fareham Town, Hampshire, UK. This
amusing story was told to us by an old friend from the South coast of England:

The vicars had tried everything in their power to remove them. After a great
deal of prayer, the churchwardens of the first church determined that the
animals were predestined to be there. Who were they to interfere with God's
will? However, the squirrels continued to multiply.

The second church's wardens also decided that they could not harm any of
God's creatures; so they purchased some humane traps, caught the miscreants and
set the squirrels free outside of town in the New Forest. Several days later,
the squirrels returned much to the Parish Council's horror.

It was only the third church, Holy Trinity, which succeeded in keeping the
intruders away.  The vicar baptised the squirrels and registered them as members
of the church.

Now they only see them at Christmas and Easter.