Here is Will and Guy's collection of funny cheese jokes, as opposed to cheesy jokes. "The early bird may get the worm, but the second mouse gets the cheese." John was feeling pretty hungry. As he walked home from work, he noticed a sign in a pub window: "a pie, a pint and a friendly word - £4". Settled comfortably inside, the barmaid served him his pie and his pint. "Just a moment," he said, "where's my friendly word?" "Don't eat the pie," she replied. Have you been offered jars of Nutella hazelnut spread lately? "Cash only, no questions asked." In the small town of Bad Hersfeld, central Germany, thieves got away with 5 tonnes of Nutella recently. That's about 6,875 jars (a staggering 27 million calories!) worth almost £14,000. Two weeks previously coffee worth £25,000 had been stolen, and last August a truckload of Red Bull energy drink disappeared in the same region of Germany. Police are looking for hyperactive, insomniac, chocoholics. Nick-named gastro-gangsters, food thieves are becoming more of a problem as food prices across the world rocket. Art Inspired Cakes Beautifully decorated cakes can be a joy to behold, but cakes decorated to resemble famous pieces of art raise the bar of artistic appreciation to a new level! 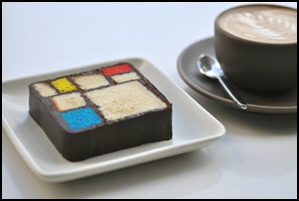 Mondrian Cake: Hanging on a museum wall, these bold, geometric Mondrianesque shapes would go perfectly with a cup of tea. Designed by Blue Bottle Coffee to be sold at San Francisco's Museum of Modern Art cafe, this cake is baked in separate colour pieces and then assembled in a checkerboard design, but using different shaped blocks. Photo via Charlie Villyard Klimt Cake: This cake is inspired by Gustav Klimt's compelling and memorable painting "The Kiss". It was hand-painted by Sweet Ladies Bakery for a wedding. 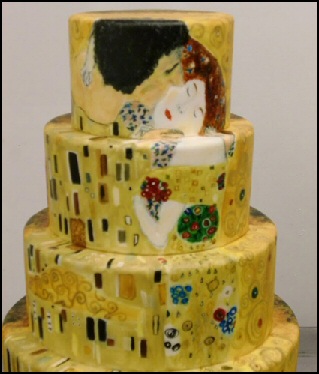 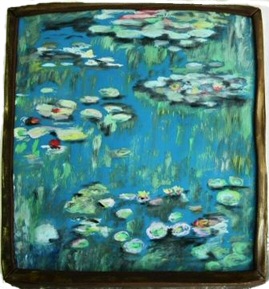 Water Lilies is one of Monet's most famous paintings. This version, by AJ's Moonlight Cakes, is truly delicious and re-creates the painting in artfully applied icing. Photo via AJ's Moonlight Cakes Keith Haring Cake: Inspired by the prolific pop graffiti artist, this cake is a beautiful tribute to Keith Haring's bold, clean lines and highly recognizable cartoon-like characters. Designed by an Italian baking outfit known as VampiAmiche Cakedesigners, this cake is covered with fondant icing, with outlined cut out characters adhered for a pop-out effect. 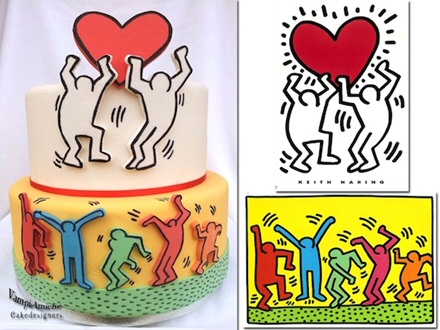 Photo via VampiAmiche Cakedesigners Lichtenstein Cake: Comic book styling is a big part of this cake which is inspired by Roy Lichtenstein's artwork. Dots and stripes are used to create areas of colour within bold black outlines. This cake, created and hand-painted by Alliance Bakery, is a piece of art in itself. Photo via Alliance Bakery 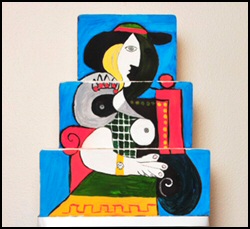 Picasso Cake: Picasso's abstract painting style makes for a striking centerpiece, beautifully illustrated by this three layer cake inspired by "Woman with Wristwatch". This cake is beautifully hand painted by Chocolaz Artisan Cakes. Photo via Chocolaz Artisan Cakes What a Way to Go. Chris Holmes, an immigration officer for Border Force at Stansted Airport, UK, handed in his resignation ….. on a cake. Beautifully piped in black onto flawless white royal icing, he explained that having recently become a father, and realising how precious life is, he wanted to spend his time doing something that makes him, and other people, happy so he is now devoting himself to his family and his cake making business. Known as Mr Cake, his resignation masterpiece was a passion cake with spiced carrot, pecans, sultanas and coconut. He said, "The manager and his colleagues were surprised but they took it very well." You are what you eat. MIT-Man(2007) by Fabrice Hyber part of the exhibition, Raw Materials at Baltic, Gateshead, UK, until 30 June 2013.

Would you believe it?  A lorry-load of burning cheese closed a road tunnel in Norway.  Over 25 tonnes of goat's cheese (a delicacy known as Brunost) became caramelised after it caught light as it was being driven through the Brattli Tunnel at Tysfjord in northern Norway. The fire raged for five days and smouldering toxic gases slowed the recovery operation. Three weeks later the tunnel was still closed because of the fire damage Police officer Viggo Berg said the high concentration of fat and sugar in the cheese makes it burn "almost like petrol if it gets hot enough". The driver spotted the fire in his trailer and abandoned his lorry about 300m (1,000ft) from the southern entrance. No-one was hurt. Kjell Bjoern Vinje, of the Norwegian Public Roads Administration, said it was the first time he could remember cheese catching fire on Norwegian roads. "I didn't know that brown cheese burns so well," he said.

The makers of the famous Stilton blue cheese have produced their own brand of ladies perfume. 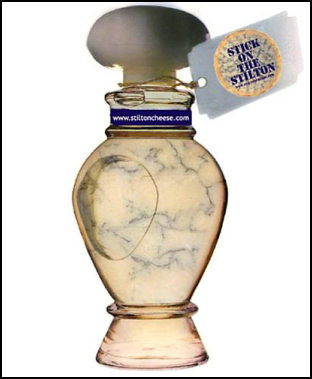 Vera's husband Charlie often fell asleep during the Sunday sermon. His wife, Vera, was fed up and decided to deal with the embarrassing situation. The next Sunday when he fell asleep, she quietly removed some pungent Stilton cheese from a bag in her purse and passed it under his nose. Groggily startled, Charlie cried out, 'No, Vera, no, please don't kiss me now.'

A cheese may disappoint. It may be dull, it may be naïve, it may be over sophisticated. Yet it remains cheese, milk's leap toward immortality. Clifton Fadiman, essayist (1904-1999)

A group of Americans were on a bus tour of France when they came upon the town of Sancerre in the Loire Valley. They eventually stopped at the little village of Chavignol and visited a cheese farm where the world famous 'Crottin de Chavignol' goat's cheese is made; their guide, who was the farmer's wife, led them through a process of cheese making, explaining how goat's milk was used.

Madame showed the group a picturesque hillside where many goats were grazing. These, she explained, were the older goats put out to pasture when they no longer produced.  Madame then asked, turning to the group, 'What do you do in the USA with your old goats that aren't producing?' One spry and very quick elderly gentleman answered, 'They send us on bus tours.'

The Cats, The Monkey and The Cheese

In our story two Siamese cats found a piece of cheese and cut it into two pieces.  Now, one piece was slightly bigger than the other. Being mini tigers, both cats wanted the bigger piece. So they decided to approach a monkey and ask him to sort out the matter. The monkey said, 'Don't worry. I'll make both the pieces equal. Then it took a bite from the bigger piece. But this made the other piece larger. So it took a bite from the other piece. This continued till the pieces became very small. Seeing this, the Siamese cats pleaded, 'Sir. We are satisfied. Let us have the pieces of cheese now.' The shrewd monkey replied, 'This is my fee for sorting out the problem.' Saying that, he wolfed down all the remaining cheese.

In Cheltenham, Gloucestershire, each year they hold a cheese-rolling competition, in which contestants chase a cheese down a slope.

"A dinner which ends without cheese is like a beautiful woman with only one eye." Jean-Anthelme Brillat-Savarin (French lawyer and politician, epicure and gastronome, 1755-1826) "How can you govern a country which has 246 varieties of cheese?" Charles De Gaulle (French general and president, 1890-1970) In 1546, author John Heywood wrote in "Proverbes" that "The moon is made of a greene cheese." But in 1546 greene meant new, un-aged, not green in colour. In 1883, Scottish author Robert Louis Stevenson in book "Treasure Island" when castaway Ben Gunn finally is found by young Jim Hawkins says, "You mightn't happen to have a piece of cheese about you, now? No? Well, many's the long night I've dreamed of cheese–toasted, mostly–and woke up again, and here I were." In early 1900's, American comic actor W. C. Fields said, "The clever cat eats cheese and breathes down rat holes with baited breath."

Experts at New Mexico's State University's Chile Pepper Institute have identified the Trinidad Moruga Scorpion as the hottest pepper on the planet. 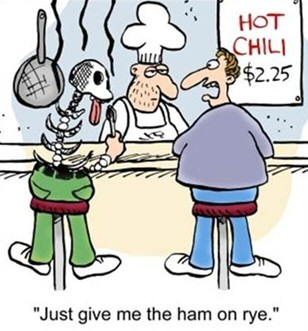 Question: What do you get when you take a cheese from the moon and divide its circumference by its diameter? Answer: Moon pi.
Footnote: Please send us your cheese jokes and funny stories.