1a) Car Speed Limit Enforced by Helicopter - Problem for Police

1b) Speed cameras are passé in Texas.
Now the police are using helicopters to catch speeding motorists.

1c) In Another State We Also Have: 'Speed Enforced by Aircraft'

Rick, a speeding motorist, was caught by radar from a police helicopter in the sky. An officer pulled him over and began to issue a traffic ticket.

'How did you know I was speeding?' Rick enquired in frustration.

The police officer pointed sombrely toward the sky.

'You mean,' stuttered Rick, 'that even He is against me?'

Did you hear about the youth who was pulled over for speeding?

The cop got out of his car and the young man rolled down his window.

'I've been waiting for you all day,' the cop said with a grin.

The guy replied, 'Yeah, well I got here as fast as I could.'

When the cop finally stopped laughing, he sent the youngster on his way without a ticket.

2d) Speed Check - If you get caught here, you deserve your fine

Another Selection of Funny Speeding Pictures

3a) Traffic Speed Enforcement by the Carabinieri 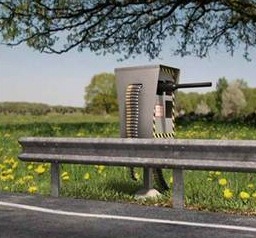 Beware: Speed Trap Ahead
Two British traffic patrol officers from North Berwick, Northumberland, UK, were involved in an unusual incident, while checking for speeding motorists on the A1 Great North Road .

One of the officers used a hand-held radar device to check the speed of a vehicle approaching over the crest of a hill, and was surprised when the speed was recorded at over 300mph. The machine then stopped working and the officers were not able to reset it. The radar had in fact latched on to a NATO Tornado fighter jet over the North Sea, which was engaged in a low-flying exercise over the Border district.

Back at police headquarters the chief constable fired off a complaint to the RAF [Royal Air Force] Liaison Office. Back came the reply in true laconic RAF style.

'Thank you for your message, which allows us to complete the file on this incident. You may be interested to know that the tactical computer in the Tornado had automatically locked on to your 'hostile radar equipment' and sent a jamming signal back to it. Furthermore, the Sidewinder Air-to-ground missiles aboard the fully-armed aircraft had also locked on to the target. Fortunately the Dutch pilot flying the Tornado responded to the missile status alert intelligently and was able to override the automatic protection system before the missile was launched'.

New road signs are springing up, which take into account gender differences.  So far, they are only experimental.

Will and Guy have seen many techniques, used by various groups, to slow the speed of traffic down.  This attempt has to be one of the best we have come across; also, it is so much cheaper than speed cameras.

Scroll down to see all three speed control pictures: 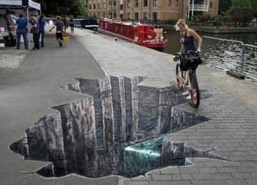 Cyclists slow down to avoid this crater-sized "hole" in the middle of a riverside towpath in London, England.  Here we can see a young lady
looking into the "hole"; but, in fact, the hole is an optical illusion, a three-dimensional drawing of a canyon, in an attempt to make careless
cyclists hit the brakes rather than ride dangerously and ignore pedestrians.

This pavement art is the work of Joe Hill and Max Lowry, who specialise in three-dimensional images, and it was commissioned by British Waterways and installed along the Regent's Canal towpath in Islington, North London.

A BW spokesperson informed Will and Guy, 'The towpaths are often narrow and are full of historic furniture such as low bridges, lock landings and bollards, all of which are part of the charm of the canal, but aren't ideal
for cyclists who need to get somewhere in a hurry.'