You may like to share Will and Guy's collection of Valentine humour with your sweetheart, we bet that at least one our funnies will make them smile.

Jim asked his friend, Tony, whether he had bought his wife anything for
Valentine's Day.

'Yes,' came the answer from Tony who was a bit of a chauvinist, 'I've
bought her a belt and a bag.'

'That was very kind of you,' Jim added, 'I hope she appreciated the
thought.'

Tony smiled as he replied, 'So do I, and hopefully the vacuum cleaner
will work better now.'

My One And Only

Roger, who was 19 years old, was buying an expensive bracelet, to
surprise his girlfriend on Valentine's Day, at a very smart jeweller's shop
in Hatton Garden, London.

The jeweller inquired, 'Would you like your girlfriend's name engraved on
it?'

Roger thought for a moment, grinned, then answered, 'No, instead engrave
"To my one and only love".'
The jeweller smiled and said, 'Yes, sir; how
very romantic of you.'

Roger retorted with a glint in his eye, 'Not exactly romantic, but very
practical. This way, if we break up, I can use it again.' 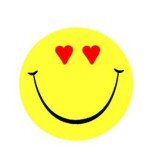 Q: What do squirrels give for Valentine's
Day?
A: Forget-me-nuts.

Q: What did the valentine card say to the stamp?
A: Stick with me
and we'll go places!

Q: What did the light bulb say to the switch?
A: You turn me on.

Q: Did Adam and Eve ever have a date?
A: No, but they had an
Apple.

Q: What did one snake say to the other snake?
A: Give me a little hug and a hiss,
honey.

Knock, Knock,
Who's
there?
Olive
Olive who?
Olive you!

Q: Why did the banana go out with the prune?
A: Because it couldn't
get a date.

Q: What is a ram's
favourite song on February 14th?
A: I only have eyes for
ewe, dear

Q: What travels around the world but stays in one corner?
A: A stamp.

Q: What happens when you fall in love with a French chef?
A: You get buttered up.

Q: What is
a vampire's
sweetheart called?
A: His ghoul-friend.

Q: If your aunt ran off to get married, what would you call
her?
A: Antelope.

One morning Emma woke up with a start.  Her husband Jim asked
what was the matter, she told him, "I just had a dream that you gave me
a pearl necklace for Valentine's day. What do you think it means?"

That evening, Jim home with a small package and gave it to his wife.
Delighted, Emma opened it - only to find a book entitled "The meaning of
dreams". 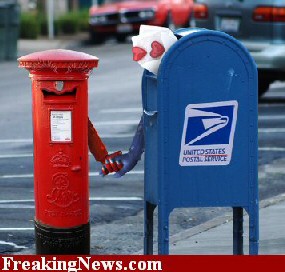 Mike walked into a post office just before Valentine's day, he
couldn't
help noticing a middle-aged, balding man standing in a corner sticking
"Love" stamps on bright pink envelopes with hearts all over them.
Then the man got out a bottle of Channel perfume from his pocket and started
spraying scent over the envelopes.

By now Mike's curiosity had got the better of him, and so I asked the
man why he was sending all those cards.  The man replied, "I'm
sending out 500 Valentine cards signed, 'Guess who?'"

What did the stamp say to the envelope?
I'm stuck on you.

It was Valentine's day and Jim and Danielle's first
date.  They sat in the darkened cinema waiting for the film to start.  The
screen finally lit up with a flashy advertisement for the cinema's
concession stand.  Jim and Danielle realised that there was no sound. The film began but the silence continued.

Suddenly, out of the
darkness, an irritated voice in the crowd loudly shouted', Okay, who's
got the remote control?' 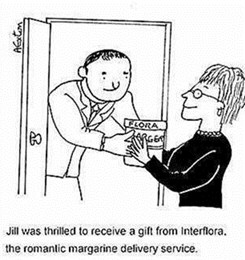 Phil, a smart and handsome young man, dressed in the latest fashion, walked into this local pub. He noticed a woman gazing at him without blinking her big eyes.
Phil felt flattered so he walked up to the woman and said in his deepest voice, 'I'll do anything you wish, beautiful lady, for just £10 but on one condition.'

The woman appeared to be trapped in the moment
and asked as if in a trance, 'What's your condition?'

Phil answered, 'Tell me your wish in just three words.'

There was a long pause, the woman opened her purse, counted out the money and handed it
to the man along with her address.  She then looked deeply into his eyes and whispered, 'Clean my house.'

How Long Have You Been Married?

When a woman on the staff of the school where I worked became engaged, a friend and colleague offered her some advice.

'The first ten years are the hardest.'

'How long have you been married?'
she asked.

My dearest wife is always going on and on and ON about NOT making a fuss over her on Valentine's Day.  She repeats that it's the thought that counts.

Well, I put a lot of thought into
the gifts from previous February 14ths but she didn't quite take to any of them like I assumed she would. Here's my list - see what you think: