Here is a selection of NFL humor that you can modify by changing the
names of the players to suit your fancied team.  Super Bowl XLV is on
February 6th 2011 at the Cowboy's Stadium, Texas.

The owner of a bar in Indianapolis is holding a competition to find the
'perfect woman', the prize is a ticket for the Super Bowl.

Amongst the tasks the aspirants will be expected to undertake
are:

N.B. Lest we get complaints from the LFL (Lingerie Football League), this
is just a Super Bowl joke!

Q: What do call a 49's fan holding a bottle of champagne after
Super Bowl XLVII.
A: Waiter.

Snow White was returning from town to the cottage in the forest
where she lived with the 7 dwarfs.  In the distance she could
see smoke, then as she got nearer she realized that their cottage had
burnt down.

Frantically, Snow White searched the
forest for the dwarfs, then she heard a lone voice saying, 'Lions
for the NFC North, the Detroit Lie Downs will win Superbowl XLVIII'.

On hearing this chant, Snow White gave a little sigh of relief as she
knew that at least Dopey was safe.

Running Back or Lineman?

Marvin Ventner, the football coach was asked his secret of evaluating his
new recruits.

'Well,' he answered, 'It's easy. I take 'em out in the woods and make 'em
run. The ones that run round the trees, I make into running backs. The ones
that run straight into the trees, I turn into linemen.'

Tebow, a local football star, is jogging down the street when he sees a building on fire. A woman is standing three floors up on ledge holding her pet cat in her arms.

'I play football, I can catch him.'

The smoke is pouring from the windows, and finally, the woman waves to
Tebow, kisses her cat goodbye, and then
tosses the moggy down
onto the street. Tebow keeps his eye on the cat as it comes hurtling down toward him. The feline, bounces off an awning and
Tebow runs into the street and catches the cat. He jumps six feet into the air and makes a
spectacular one handed catch. The crowd that has gathered to watch the fire, breaks into cheers.
Tebow does a little dance, lifts the cat above his head, wiggles his knees back and forth, then
Tebow '
spikes'
the cat
into the pavement.

You have probably spotted by now that most of these NFL yarns can be improved
by modifying the people or place to suit those teams still in this year's NFL playoffs.

Because they play dead at home and get killed on the road.

One morning in elementary school, the students were going to a geography
class. The teacher wanted to show the students where cities and states are.

The teacher asks the class, 'Does anyone know where Pittsburgh is?'

Francis raises up his hand and says, 'Yeah, Pennsylvania.'
The teacher
replies, 'Very good, Francis, now can anyone tell me were Detroit is?'

Trying to confuse the children, she now asks, 'Where's Denver City?'
Ross raises his hand and says, 'Oh, oh, pick me, I know?'

The teacher says, 'OK, Ross where is Minnesota?'
'Last place.'

Will and Guy Present Their Favourite Funny NFL Jokes

The Chicago Bears took the field for their first play-off practice.

Not long after the practice started a Bear offensive player noticed a
white, powdery substance on the field. Practice was immediately stopped and
experts were called in to examine the substance. With recent scares about
anthrax, officials worried that terrorists had somehow gained access to the
field.

A group of nervous Chicago players stood and watched as the substance was
examined.

Finally the tests were completed and the experts revealed that the powder
was just the chalk dust from the goal line. It was an understandable mistake
considering the Bears' offense seldom got near that area of the field.

What's the difference between the New York Jets and a dollar bill?
You
can still get four quarters out of a dollar.

Quarterback
Why can't Mark Sanchez use the phone
anymore?
Because he can't find the receiver.

"At a press confernce a Viking player, a Bills player, and a Packers
player were eating their lunch together.

The Viking player said, "If I have meatballs for lunch again ill jump
from the top of this stadium!"

The Bills player said the same about his pizza, and the Packer said the
same about the peanut butter and jelly sandwiches in his lunchbox.

The next day the Viking player got meatballs and jumped to his death.

Then the Bills player got pizza and jumped to his death.

Then the Colts player got peanut butter and jelly sandwich and jumped as
well.

At the funeral, the Viking and Bills wives were crying and said, "If only
we had known this I wouldn't have packed them that lunch!"

The Colts wife said, "That's strange, my husband always packs his own
lunch!" 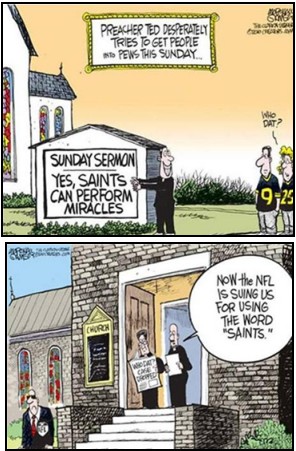 Miss Marie Collins, a first-grade teacher, explains to her class that she
is an Pittsburg Steelers fan. She asks her pupils to raise their hands if
they are Steelers fans too. Not really knowing what a Steelers fan was, but
wanting to be liked by their teacher, their hands fly into the air.

There is, however, one exception. Paula has not gone along with the
crowd. The teacher asks her why she has decided to be different.

'Because I'm not a Steelers fan,' she answers.

The teacher asks Paula why she is a Ravens fan.

'Well, my Dad and Mum are Ravens fans, so I'm a Ravens fan too, Paula
responds.

'That's no reason,' Miss Collins retorts. 'What if your mum was a moron,
and your dad was an idiot. What would you be then?'

Paula smiles and says, 'Then I'd be a Steelers fan.'

Spare Seat in The Stand?

Jim Lewis was thrilled to get a ticket for the Super Bowl.  The big
day came and he took his seat in the stand.  After the pre-game show he
noticed the seat in front of him was still vacent.   Even after
the kick-off nobody was sitting there, so he asked the guy next to the empty
seat why nobody was sitting there.  The guy replied it would have been
my wife's seat but she just died."

"Well," said Jim man, "why didn't you just bring a friend or relative?"

The guy replied, "Oh, they're all at the funeral."

How many Cardinals does it take to win a Super Bowl?

We don't know, and we may never find out.

Classic Superbowl joke that could be made funnier by
subsituting other teams such as the Vikings or the Lions.

During the Super Bowl, there was another football game of note between
the big animals and the small animals. The big animals were crushing small
animals and at half-time, the coach made a passionate speech to rally the
little animals.

The defence huddled around the coach and he asked excitedly, "Who stopped
the elephant?"

"I did," said the centipede.

"Who stopped the rhino?"

"Uh, that was me too," said the centipede.

"And how about the hippo? Who hit him for a 5 yard loss?"

"Well, that was me as well," said the centipede.

"So where were you during the first half?" demanded the coach.

"Well," said the centipede, "I was having my ankles taped."

New England Patriots had just finished their daily
practice session when a large turkey came strutting onto the field.  While
the players gazed in amazement, the turkey walked up to the head coach and
demanded to be given a chance to play at tight end.

Everyone stared
in silence as the turkey caught pass after pass and ran right through the
defensive line. When the turkey returned to the sidelines, the coach
shouted, 'You're superb. Sign up for the season, and I'll see to it that you
get a huge bonus.'

'Forget the bonus,' replied the turkey, 'What I
want to know is, does your season go past Thanksgiving Day?'

Where other than Texas do people prize their cattle more than their cars?
Don't answer that Scotland!

What do you call a Vikings' fan with half a brain?
Gifted! 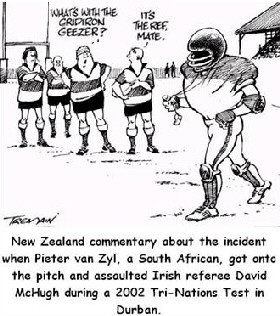 A football coach walked into the changing room before a game.  He looked over to his new signing and said, 'I'm not supposed to let you play since you failed arithmetic, but we need you to be in the team. So,
what I have to do is ask you a math question, and if you get it right then you will be allowed to play.'

The player agreed, so coach looked into his eyes intently and asked, 'Okay, now concentrate
hard and tell me the answer to this. What is two plus two?'

The player thought for a moment and then answered, '4?'

'Did you say 4?'
the coach exclaimed, excited that he had got it correct.

Suddenly
all the other players on the team began shouting..., 'Come on coach, give him another chance!'