Will and Guy each have considerable experience of classroom teaching. Will says a little humour makes it easy to control a class.  Guy says collecting pupil's unintentional puns was what kept him sane.

A head teacher is making his rounds of the school when he hears a terrible commotion coming from one of the classrooms. He rushes in and spots one boy, taller than the others, who seems to be making the most noise. He seizes the lad, drags him to the hall, and tells him to wait there until he is excused. Returning to the classroom, the head teacher restores order and lectures the class for half an hour about the importance of good behaviour. 'Now,' he says, 'are there any questions?' One girl stands up timidly. 'Please sir,' she asks, 'may we have our teacher back?' 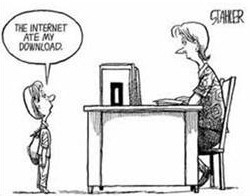 Unlike the olden days, no dogs were injured in compiling this excuse.

When Mother came home she was amazed to see Nathan sitting on a horse, writing something. 'What on earth are you doing there?' he asked. 'Well, the teacher told us to write an essay on our favourite animal.' Answered Nathan, 'That's why I'm here and that's why Sally sitting in the goldfish bowl.'

Footnote: Please send Will and Guy your school pun list.