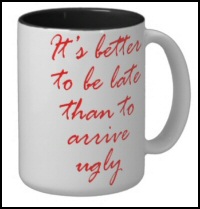 Here is our collection of items about people who are late; also amusing stories involving delays.

My son, Gareth, an insurance broker in Florida, loves ocean fishing and takes his cell phone along on the boat. One morning we were drifting about ten miles offshore as Gareth discussed business on the phone. Suddenly his rod bent double, and the reel screamed as line poured off the spool. Gareth was master of the situation. "Pardon me," he told his customer calmly. "I have a call on another line."

I'm sure that nearly everyone has a friend or relative who, however hard they try, always seems to be late. Will's friend, Dave Barker was one such person and nearly drove Will mad when they worked together. Will was always punctual, so eventually, if they were due to meet at 9.30, Will would tell him 9.00, but I suspect Dave realised and carried on in his own sweet way and still managed to be late!

Late for a Date 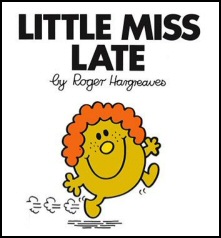 After waiting more than an hour and a half for her date, Melissa decided she had been stood up. She changed from her best dinner dress into her pyjamas and slippers, fixed herself snack and resigned herself to an evening of TV. No sooner had she flopped down in front of the TV than her doorbell rang. There stood her date. He took one look at her and gasped, "I'm two hours late ... and you're still not ready?"

Mark had this problem of getting up late in the morning and was always late for work.  After a few weeks of this, Mr Johnson, his boss, called him in and threatened to fire him if he didn't do something about it. So Mark went to his doctor, who gave him a pill and told him to take it before he went to bed. He got a great night's sleep and actually beat the alarm in the morning. After a leisurely breakfast, he cheerfully drove to work. "Mr Johnson," he said, "The pill my doctor subscribed me actually worked!" "That's all fine," said his boss, "But where were you yesterday?"

Timekeeping - Does it Matter?

Steve Cleary was in his early 50's, retired and had started a second career. However, he just couldn't seem to get to work on time. Every day he was 5, 10, 15 minutes late. However, he was a good worker, really clever, so the owner was in a quandary about how to deal with it. Finally, one day he called Steve into the office for a talk. 'Steven, I have to tell you, I like your work ethic, you do a top class job, but you're being late so often is quite a worry.' 'Yes, I realise that, sir, and I am working on it.' replied Steve. 'I'm pleased to hear that, you are a team player. It's odd though, you're coming in late. I know you're retired from the Royal Navy. What did they say if you came in late there?' 'They said, "Good morning, Admiral." '

Jim has been late for everything - late for work, late for football matches, late for holidays. He's left women stood waiting on a first date, turned up to meals with friends hours after he should have and even arrived for funerals long after they've begun. But now his poor timekeeping has been diagnosed as a medical condition - Chronic Lateness Syndrome. His family still don't believe him. They think he's just making excuses. But Jim says that knowing it's a real condition and that it's not his fault has really helped him.