Will and Guy were touched by this example of sisterly love. We hope that you will be moved by the pictures and video demonstrating a sister's love for her brother.

1) A little girl picks up, then empties her wash bag. (Note her longish hair in this picture) 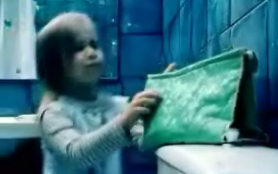 2) The little girl cuts her own hair.  How can this be sisterly love? 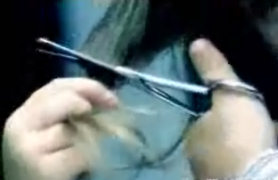 3) This is the result of her do-it-yourself haircut 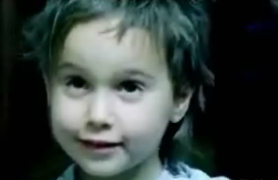 4) The little girl's parents look horrified, especially her mother. Note, for the first time we see her brother.  How can this possibly be an act of sisterly love? 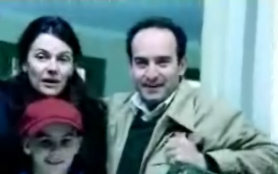 5) This is the crucial scene, the little girl gives brother the hair which she has just cut. 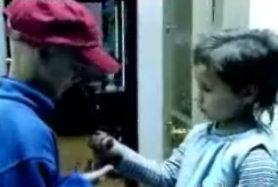 6) Normally we would leave you in suspense, but in this touching example of sisterly love we simply have to include the final scene.

We can reveals that the brother has cancer and has just returned from hospital where he has received chemotherapy.  One side-effect is that the poor brother has gone bald.  What more poignant way for the sister to demonstrate her love than to cut off her hair and give it to him. 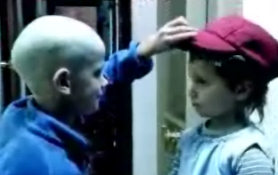 Check out our free video clip. You will be amazed at the power of sisterly love. N.B. With some browsers you need to click twice on the Play arrow

to start the video. Free video clip of Sisterly Love (Right click Save Target As..)

A grandmother and a little girl whose face was sprinkled with bright red freckles spent the day at the zoo.  The children were waiting in line to get their cheeks painted by a local artist who was decorating them with tiger paws. 'You've got so many freckles, there's no place to paint!' a boy in the line cried. Embarrassed, the little girl dropped her head. Her grandmother knelt down next to her. 'I love your freckles,' she said. 'Not me,' the girl replied. 'Well, when I was a little girl I always wanted freckles,' she said, tracing her finger across the child's cheek. 'Freckles are beautiful!' The girl looked up. 'Really?' 'Of course,' said the grandmother. 'Why, just name me one thing that's prettier than freckles.' The little girl peered into the old woman's smiling face. 'Wrinkles,' she answered softly.

This is the story of a little boy who had very bad character. His father gave him a bag of nails and told him that each time he would lose his patience, he should nail a nail behind the door. The first day the boy nailed 37 nails behind the door. The following weeks, as he learned to control his temper, each time he would nail less nails behind the door. He discovered that it was easier to control his temper than to nail behind the door. A day came when he could control his character during all the day. After informing his father, this one suggested that he should remove a nail each day he could control his character. The days passed and the youth could announce his father that there were no more nails to remove from the door. His father took him by the hand and led him to the door. He told him, 'You have worked hard, my son, but look all those holes in the door. Never more it will be the same.  Each time you lose your patience, you leave scars exactly as the ones you see here.'

Lesson Three - The Visit A Most Inspirational Story

One day, the father of a very wealthy family took his son on a trip to the country with the express purpose of showing him how poor people live. They spent a couple of days and nights on the farm of what would be considered a very poor family. On their return from their trip, the father asked his son, 'How was the trip?' 'It was great, Dad.' 'Did you see how poor people live?' the father asked. 'Oh yeah,' said the son. 'So, tell me, what did you learn from the trip?' asked the father. The son answered, "I saw that we have one dog and they had four. We have a pool that reaches to the middle of our garden and they have a creek that has no end. We have imported lanterns in our garden and they have the stars at night. Our patio reaches to the front yard and they have the whole horizon. We have a small piece of land to live on and they have fields that go beyond our sight. We have servants who serve us, but they serve others. We buy our food, but they grow theirs. We have walls around our property to protect us, they have friends to protect them." The boy's father was speechless. Then his son added, 'Thanks Dad for showing me how poor we are.' Footnote: Please send us your inspirational children's story.