Trick or treat, you're so neat.
Give
us something good to eat.
Nuts and candy,
fruit and gum.
We'll go away if you give me some.

7 Signs That You
Are Too Old For Trick or Treat

Origins of Trick or Treat
Superstition

Remember that the main focus of Halloween is communication with the spirits of
one's ancestors.  Let us set aside the form of the spirit, and focus on the act of connecting with departed souls.

It is only human nature that
some individuals will take these spirits very seriously, whilst others will seek to take advantage of the desire to contact the ancestors.  I put it to you that amongst the ancients, that advantage could be a simple proposition; a promise to pray
for the souls of the someone else's departed in return for a small favour, a 'soul cake', or a bowl of soup.

Now it's only takes a small step to create a ritual that becomes, trick or
treat.  'Give me a bowl of soup, and I will pray for the soul's of your departed - or else I will curse you'.  If you have plenty of soup or soul cakes why take the chance?  As for the chancers,
they know who has the cakes and the greatest fear of a curse.

For the trick or treaters it's a win-win situation, they either get some food, or have fun playing a prank.  Down the ages, and
across the continents, the rituals surrounding trick and treat vary enormously as we will see in the following tales.

A Trick or Treat
Ditty:

Trick or treat, smell my feet.
Give me something good to eat.
If you don't, I won't be sad.
I'll just make you wish you had!

Scotland and Ireland are the originators of Guising.  Incidentally, disguising and guising are a pair of words which have the same meaning, yet seem logical opposites; perhaps flammable and inflammable
are the most famous example of this lexical phenomenon.

Over time 'Trick or Treating' has taken on many local variations.  For example in Scotland from about 1850 to 1965, the guisers would patrol not with a
pumpkin lantern, but a tumshie lamp made of swede or turnip. 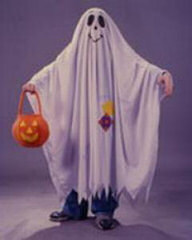 In this Scottish variation, the children would knock at the door and ask: 'Are ye wantin' any guisers?'.  If the householders wanted
to play the game, they would invite in the children and try and guess the identities of the guisers.  Still no treat.  In order to get food, or a coin, the children had to perform their party piece, which could
be a song, dance or even a magic trick.  Only then would they get a well earned treat.

In Ireland they also go in for guising, but the emphasis is more on pranks, and not just on Halloween, but in
the week leading up to October 31st.  The Irish have always been particularly keen on bonfires on Halloween, whereas the English protestants prefer to wait a few days and celebrate Bonfire night on
November the 5th.

In Germany and Austria they celebrate Seleenwoche, this festival lasts from October 30th to November 8th.  The theme revolves around leaving out bread and drink for spirits of ancestors returning for the night of Halloween.

On Halloween 1906 four boys took apart a shop owner's wagon and put it
back together, but on his porch. What they did not know was that he watched
quietly from his bedroom window and so the owner knew all the boys.

After they got done, he calmly said, "Boys, I'm glad you had some fun,
but if that wagon is back on the street in the morning, there will be ice
cream for everyone."

'Penny for the Guy'

On Bonfire night (5th of November), the emphasis is on extracting money
rather than sweets from passers-by.  The trick is to get a good pitch
for your 'Guy Fawkes'.  Time spent in getting a good costume and a
realistic hat is rewarded by greater takings.
See more on Bonfire Night

It was meant as a Halloween prank, however Police were far from impressed with this trick or treat.

Police say three teenagers weren't at all clever about choosing a target. The youngsters, a 17-year-old
and two 15-year-olds peppered a marked police car with paintballs - and were promptly arrested on reckless endangerment and weapons charges.

Suffolk County police say the teens fired at their police car
with several paintballs on 31st October 2007 in Middle Island, on Long Island, New York. The driver's side window was hit at least twice. Police reported that the youths were carrying three paintball guns and
'several hundred' paintballs when they were arrested.

Every generation has it's horror story of a madman giving poisoned candy
to unsuspecting trick or treat kids.  Fortunately, they all turn out to
be hoaxes.  Perhaps its a way of telling children to be careful.
Will and Guy lookout for TV or newspaper articles which claim to have
unearthed the latest 'A madman is distributing candy randomly to trick or
treaters'.

Clark O'Brien Case
There was case of a child being poisoned by a candy bar at Halloween,
however, in that instance it was his father.  In 1995 Ronald Clark
O'Brien was convicted of poisoning his own son Timothy with cyanide in a
Pixie Stix.  On fortunate aspect of this case was that O'Brien DID give
the poisoned candy randomly to three other children.  As luck would
have it those children did not like Pixie Stix, so they did not eat the
cyanide and survived.

Derren Brown is an English magician, illusionist who performs a Mind
Control series on Channel 4 in the UK.  Derren was inspired by the
hypnotist Martin Taylor to take up a career in illusion and hypnosis.

One interesting experiment was all the volunteers who had previously
received a trick or treat in previous episodes. This programme highlighted
the belief of superstition, and how it ca be applied in the real world.

No
Trick, No Treat in Moscow - Schools Ban Halloween

The Russian Orthodox
Church and the Moscow city schools administration are taking a stand against Halloween. The educators say that bringing elements of religion into the classroom is inappropriate, while the clerics condemn
its connection with evil spirits.

The Moscow education administration has written to schools banning celebrations. 'Religious elements in the celebrations contradict the secular part of the education in
state educational institutions,' the letter said, according to Russia's NTV.

The department is also reportedly concerned that ghoulish elements of the holiday have upset parents. 'Parents have expressed
their unhappiness that some schools are celebrating this - how do you call it? - event or holiday,' a department spokesman told the Moscow Times.

The spokesman, Alexander Gavrilov, said parents were
distressed to see children pretending to hang each other after Halloween.

A Russian Orthodox Church spokesman, meanwhile, said Halloween was 'more than strange'.  Halloween, the night before the
Christian All Saints Day, and incorporating pre-Christian elements - is not widely celebrated in Russia.

Trick or Treat Night - Will and Guy's View

Breaking every rule in the parent handbook happens on Halloween say Will and Guy.

We wonder if more care should be taken by parents on this particular evening. After all we spend our lives, when the children are young, warning them to beware of strangers with sweets, and what happens?
Halloween: we encourage them to knock on the doors of strangers, make demands with menaces, and binge on sugary items.

Dressing up in a scary costume and cadging chocolate and money is an irresistible
proposition for any child. Perhaps we should not be encouraging them? Is it harmless fun or an irritating excuse to annoy the neighbours?  Will has observed that some neighbours, near to his home, never close
their curtains in their lounge except on Halloween.

The rest of the year we warn children about the dangers of strangers and then under the guise of trick or treating, encourage youngsters to dress in masks
and approach strangers demanding money.  There's a tap on the door and standing in the streetlight, silhouetted by the neighbour's security light, is a gaggle of young teenagers. One wears a broken plastic
horror movie mask.  Another has the script. 'Trick or treat.' That's about the limit of the rich cultural fare on offer.  They want money, they might put up with sweets. They're certainly not giving anything back
in exchange.

We wonder when trick or treating became such a fixture in the UK calendar? We ask the question because trick or treat is not a tradition.  Maybe it was in the 1980's it was imported similar to
the Japanese 'knotweed' and it has spread in the same way.

During the 1980's, the House of Lords debated the 'recently imported trick-or-treat custom of demanding money on threat of playing a nasty trick as
being a way in which young people might obtain money from old people and others'.  Their lordships saw trick or treating not as a tradition, but as American for begging.  We ought to be questioning the festival
ourselves, in much the same way.

Will and Guy bemoan the fact that trick or treating is a consumer proposition. It's a sales pitch, not a festival.  Spook-related spending in the UK has risen tenfold in a
decade, up to £120m. In the US, Halloween is worth $6bn a year to retailers.

We wonder if you agree?

Most American municipalities sensibly set times for trick and treat.
I haven't seen any ordinances that allow times later than 8:00pm, and many
are in the range of 4-6.00pm thus favoring younger children.  We can
only hope that this idea of limiting the Trick or Treat times will cross the
Atlantic, after all the UK is small enough to designate a national time.

When Will and Guy were boys, people in the UK celebrated Bonfire Night on
the 5th of  November more than Halloween.  This celebrates a
famous plot led by Guy Fawkes to blow up the Houses of Parliament back in 1605.
As we know from history the attempt failed, and Guy Fawkes was caught tried
and executed.  As boys Will and Guy loved to build a bonfire, let off
fireworks and cook sausages and baked potatoes.

Will and Guy will be bringing reports of the best stories from the
2012 Trick and Treat.