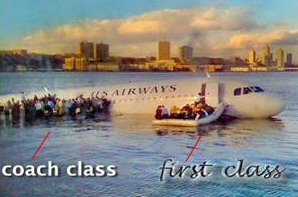 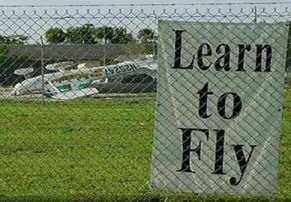 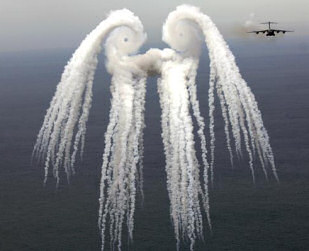 The United States Air Force C-17 Globemaster III Military Transport with the 14th Airlift Squadron located at Charleston Air Force Base in South Carolina flies away after releasing flares over the Atlantic Ocean.

A Beach to Avoid?

Exchanges Between Qantas Pilots and their Engineers

Kulula Airline - Give Them a Try

Kulula is a low-cost South-African airline that doesn't take itself too seriously. Check out their new livery! And get a kick out of the comments at the end of the photos. 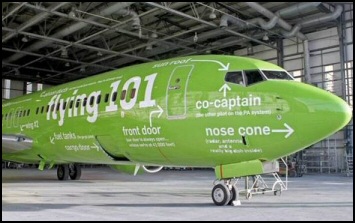 "Welcome aboard Kulula 183 to Johannesburg. To operate your seat belt, insert the metal tab into the buckle, and pull tight. It works just like every other seat belt; and, if you don't know how to operate one, you probably shouldn't be out in public unsupervised." "Weather at our destination is 50 degrees with some broken clouds, but we'll try to have them fixed before we arrive. Thank you, and remember, nobody loves you, or your money, more than Kulula Airlines." "Your seat cushions can be used for flotation; and in the event of an emergency water landing, please paddle to shore and take them with our compliments."

Lions Under a Plane's Wing 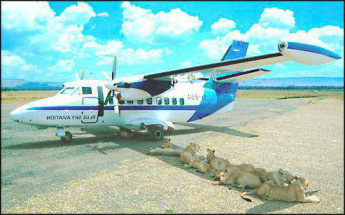 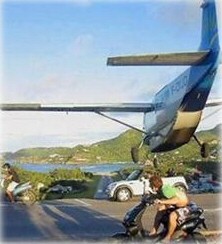 Is that a runway that we can see in the middle just to the left of the car.  Do the shadows confirm that it is indeed a near collision? Guy thought this was a near mess, rather than a near miss.

This Pilot Story May, or May Not Be True - What do You Think?

The photographer for a national magazine was assigned to get photos of a great forest fire.  Smoke at the scene was too thick to get any good shots, so he frantically called his home office to hire a plane. 'It will be waiting for you at the airport!' he was assured by his editor. As soon as he got to the small, rural airport, sure enough, a plane was warming up near the runway. He jumped in with his equipment and yelled, 'Let's go! Let's go!' The pilot swung the plane into the wind and soon they were in the air. 'Fly over the north side of the fire,' said the photographer, 'and make three or four low level passes.' 'Why?' asked the pilot. 'Because I'm going to take pictures! I'm a photographer, and photographers take pictures!' said the photographer with great exasperation. After a long pause the pilot said, 'You mean you're not my flying instructor.' 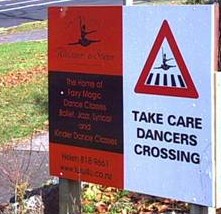 This next yarn reminds of my former classmate Pete.  At school, Pete was always in the top 2/3 in our class, but once he left school, he never could settle in a job.  He landed a job as a bus driver, but his denouement came when he took a detour and drove the bus to his home.  Pete, got out, went in, left the passengers on the bus, had a cup of tea and drove on half an hour later.  When the bus company discovered his antics, his supervisor dismissed him on the spot.  The Airline flight attendant in this next tale is going the same way as Pete. From a Stingem employee....' Welcome aboard Stingem Flight X to YYY.' We are pleased to have some of the best pilots in the industry... Unfortunately, none of them are on this flight...!' Then he progressed to the famous 'Fasten Seatbelt Routine'.  What he said was: 'To operate your seatbelt, insert the metal tab into the buckle, and pull tight. It works just like every other seatbelt, and if you don't know how to operate one, you probably shouldn't be out in public unsupervised.' In the event of a sudden loss of cabin pressure, oxygen masks will descend from the ceiling. Stop screaming, grab the mask, and pull it over your face. If you have a small child travelling with you, secure your mask before assisting with theirs. If you are travelling with two or more small children, decide now which one you love the more. After the plane landed, he said: 'As you exit the plane, make sure to gather all of your belongings. Anything left behind will be distributed evenly among the flight attendants' His final announcement was: 'Thank you for flying Stingem Airlines. We hope you enjoyed giving us the business as much as we enjoyed taking you for a ride.' Footnote: Please send us your stories or pictures of funny planes.