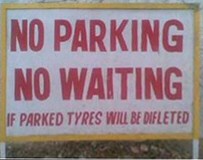 Indian English or South-Asian English comprises several dialects or
varieties of English spoken primarily in the Indian subcontinent.  These
dialects evolved during and after the colonial rule of Britain in India.

Will and Guy have trawled the net and found these amusing and hilarious
examples of Inglish; we do not wish to poke fun at our Indian friends but
admit that these items are funny.

Wrong: Can you capable work this Sunday?

Correct: Are you able to work this Sunday?

English is one of the official languages of India, with about ninety
million speakers according to the 1991 Census. 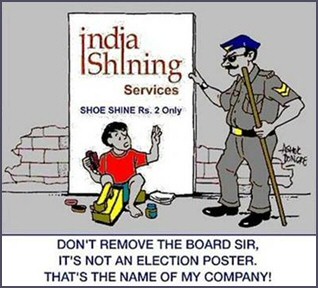 Fewer than a quarter of a million people speak English as their first
language. With the exception of some families who communicate primarily in
English, as well as members of the relatively small Anglo-Indian community
numbering less than half a million, speakers of Indian English use it as a
second or third language, after their respective Indian language(s).

Several idiomatic forms, derived from Indian literary and vernacular
language, also have made their way into Indian English. Despite this
diversity, there is general homogeneity in syntax and vocabulary among the
varieties of Indian English.

For the better off, fluent English and a "good" accent convey status
faster than titles, names, addresses or offshore bank accounts.

They might say: Tom was not there but.
Instead of: But Tom was not
there.

They might say: He does this always.
Instead of: He always does this.

English has been with India since the early 1600's, when the East India
Company started trading and English missionaries first began their efforts.

The English which is spoken in India is different from that spoken in
other regions of the world, and it is regarded as the unique variety which
is called Indian English or Inglish.

Enthusiasm is called enthu; as such, it can be used in new ways. One can
say, 'That guy has a lot of enthu.' While this is simply an abbreviation,
enthu can also be used as an adjective where enthusiasm cannot, as in 'He's
a real enthu guy.'

The same applies for fundamentals, which is shortened as fundas. 'She
knows her fundas.' What is interesting about fundas is that when the -as
ending is dropped and -u is added, it takes on a new meaning and can be used
in a new way. Fundu basically means wonderful or brilliant. One can say 'He
is a fundu person' or even 'He is fundu.'

Another example is the practice in Mumbai of adding -fy to a Hindi word
to indicate that an action is being done to someone by someone. From the
Hindi word muska, to muskafy means to flatter somebody or to butter them up.
Similarly, to pataofy is the action of wooing someone.

Entry From Backside Only, refers to a phrase commonly used on signposts
in India to indicate the rear entrance of a building

Dear sir, with reference to your above see my below - popular opening
line in official letters.

Perhaps the most endearing aspect of Indian English is the way it has
preserved forms now regarded as highly old-fashioned in Britain. Addresses
such as "Good sir" and questions like "May I know your good name?" are
commonplace, as are terms like "tiffin" and "cantonment".

Will and Guy have learned that India's downtrodden "untouchables" are to
open a temple to a "Goddess of the English language" in honour of Lord
Macaulay, an architect of the British Empire.

Leaders of India's low-caste Dalits [meaning literally the broken people]
are to celebrate the opening of a temple shaped like a desktop computer to
inspire "untouchable" children to improve their prospects in life by
learning English. They believe learning English will open up new
opportunities for India's 160 million Dalits in higher education and
high-status government careers.

Dalits are India's most persecuted caste and its members suffer violence
and discrimination throughout the country.

Leaders of the influential Dalit movement in Uttar Pradesh state, where
the pro-dalit Bahujan Samaj Party is in power, believe more could escape the
worst aspects of "untouchability" if they master the English language.

A foundation stone was laid in April and a 30 inch brass statue of the
"goddess" was dispatched from New Delhi to Lakimpuri Kheri village in Uttar
Pradesh where campaigners are hoping to open the temple formally in honour
of Lord Macaulay, the 19th Century colonial official who sought to create an
English-speaking Indian middle-class elite.

'She is the symbol of Dalit renaissance,' Chandra Bhan Prasad, a Dalit
writer who came up with the idea of the Goddess of English, told us. 'She
holds a pen in her right hand which shows she is literate. She is dressed
well and sports a huge hat - it's a symbol of defiance that she is rejecting
the old traditional dress code. In her left hand, she holds a book which is
the constitution of India which gave Dalits equal rights. She stands on top
of a computer which means we will use English to rise up the ladder and
become free forever.'

'It's not possible to get by in today's world without English. Even to
communicate with people in other Indian states, you need to know either the
local language or English. Since you cannot learn multiple Indian languages,
English has to be used as the link language.'

English, he believes, will increase the Dalit youths' chances of getting
into institutes of higher education and improve their employment prospects
and raise their position in society from low menial jobs to careers in law,
education and government.