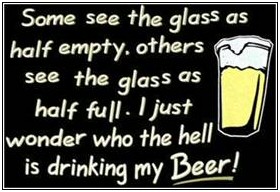 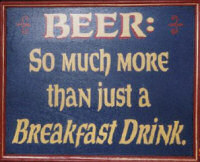 'Tell me, Ronan, how did you manage to get so very drunk last night?' asked the parish priest. 'Well you see, Father, it was like this. I got into very bad company after winning a bottle of whiskey at a raffle.' 'But you were with Mick McGahey, Ryan O'Toole, and Patrick McCann and they don't drink.' 'Dat's what I mean, Father...'

In front of you there is a galloping pig which is the same size as your car and you cannot overtake it. Behind you there is a helicopter flying at ground level. Both the giant pig and the helicopter are travelling at the same speed as you. What must you do to safely get out of this highly dangerous situation? Get off the merry-go-round - you're drunk! 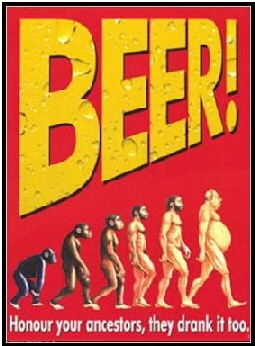 Will was trying to teach his young son the evils of alcohol. He put one worm in a glass of water and another worm in a glass of whisky. The worm in the water lived, while the one in the whisky curled up and died. 'All right, son', asked Will, 'what does that show you?' 'Well, Dad, it shows that if you drink alcohol, you will not have worms.' 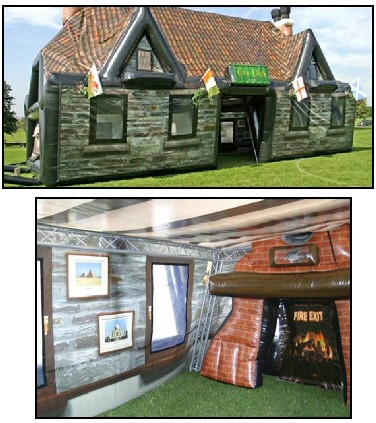 An inflatable version of the traditional-looking British pub has gone on sale for people to install in their garden. The inflatable boozer, which measures 15m by 7.5m and is 8m tall, includes details such as a tiled roof, brick stone wall and two chimney pots. Inside there's a welcoming fire place feature and enough room for about fifty drinkers with a fully stocked bar. A spokesperson for DrinkStuff, which sells the boozer online, informed Will and Guy, 'We British love a traditional public house, propping up the bar with a pint of English ale, but you've probably never had a drink in a pub like this.'

It was late one Saturday night, when the local Garda spied Timothy O'Carroll driving in quite a meandering fashion along the streets of County Cork. After pulling him over, the policeman asked O'Carroll if he had been drinking that night. 'Who told on me?' asked Timothy. 'Well, so I have, occifer. So I have,' continued the thoroughly drunk O'Carroll. 'It's Saturday night, you know. Me and me lads, we made a stop by the pub, but I only had six or seven pints, that's all. But then they had somethin' called "Happy Hour" during which they served these delicious margaritos, or margaritas? Anyway they are quite good. I had four...no five of those. Then I had promised to drive O'Callaghan, me friend, home, and he invited me in. Well, I had to go in for a couple pints of Guinness. I really couldn't be rude, now occifer, Could I? Of course, on the way home I stopped to get another pint for later...' At that point Timothy began fumbling around inside his coat and suddenly lifted up a bottle of whiskey for the Garda to inspect. The policeman gave a deep sigh, saying, 'Sir, you will need to step out of the vehicle to take a breathalyser.' Indignantly, O'Carroll replied, 'Why, don't you believe me?' 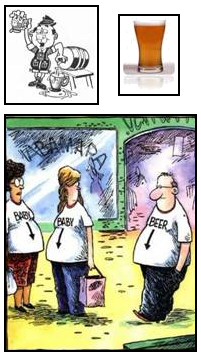 Six retired Irishmen were playing poker in Monaghan's flat in Dungarvan when Sean O'Toole loses €700 on a single hand, clutches his chest and drops dead at the table. Showing respect for their fallen brother, the other five continue playing standing up. Michael Lennon looks around and asks, 'Oh, me boys, someone's got to tell Sean's wife. Who will it be?' They draw straws. Cavan Colquhoun picks the short one. They tell him to be discreet and gentle and not to make a bad situation any worse.' Discreet? I'm the most discreet Irishmen you'll ever meet. Discretion is my middle name. Leave it to me.' announces Cavan. He goes over to O'Toole's house and knocks on the door. Brenda O'Toole answers and asks what he wants. Cavan declares: 'Your husband just lost €700 and is afraid to come home.' 'Tell him to drop dead!' snarls Brenda.' I'll go tell him.' says Cavan.

Will On His Way to the Bottle Bank 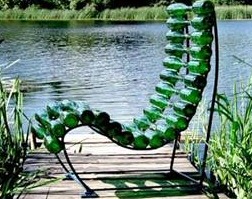 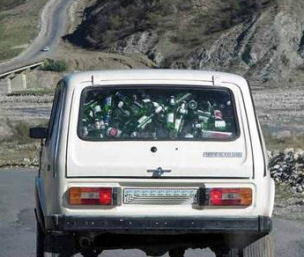 The Cost of Drinking 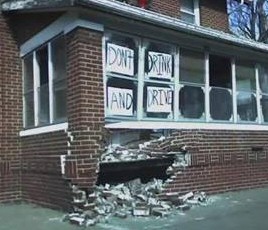 Wine From A Machine: Only in the USA! The French probably won't like it but the Americans have invented a new way to sell their wines say Will and Guy. Shoppers in the US state of Pennsylvania, have been given the chance to buy their favourite tipple from a wine vending machine. The state has some of the strictest alcohol laws in the country and until now wine has only been sold at state-owned shops. The machines checks not only the buyer's identification for proof of age but also includes a built-in breathalyser to test sobriety. A few machines are being tested at supermarkets before more are placed Will and Guy have learned.

How To Feel Intoxicated Without Drinking 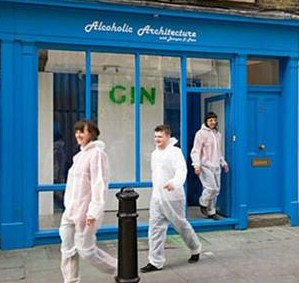 A New Craze For Gin Mist Sweeps London: Another funny alcohol story Will and Guy Should you find yourself in London and fancy a swift G and T [Gin and Tonic] why not pop into the temporary bar which has been named "Alcoholic Architecture" and can be found in Newburgh, West London. You will have to don protective clothing [see photo] for your 40 minute sojourn, to stop your clothes smelling like a distillery when you leave. As you enter the bar you will be encouraged to breathe sensibly as the air is permeated with an intoxicating mist of gin and tonic. The bar is decorated with giant limes and massive straws, with a soundtrack of drinks being poured onto ice to make visitors feel as if they are inside the drink. Sam Bompas and Harry Parr, the inventors of this system and *others, are always striving to give people an epic experience of food and cocktails, and they have carefully calculated the "mixology" of alcohol vapour in the air to give you a slightly merry buzz as the large grins on the faces of people leaving the bar clearly show. Tickets are £5 [$7 USD] and can be bought by anyone 21 and over. *Other systems from these two include scratch and sniff cinema where aromas are micro-encapsulated and printed onto special scratch 'n' sniff cards for everyone in the audience and jelly banquets.

Doh Ray Me Beer: A Funny, Silly, Song Brought to you courtesy of Homer J. Simpson

Dough: The stuff I need to buy me beer Ray: The feller who sells me beer Me: The guy who drinks the beer Far: The distance to my beer So: I think I'll have a beer La: La la la la la la beer Tea: No thanks, I'm drinking beer That will bring us back to: [Looking into his empty glass] Doh! Footnote: Please send us your funny drinking stories and jokes.