Stop, or Slow Down

One night Rodney was driving home along a road he knew well.  When he reached the Stop sign he slowed down but did not actually come to a halt, whereupon a police officer pulled Rodney's car over. 'What difference does it make' said Rodney, 'slow down or stop'. 'I will give you a demonstration' said the officer and starting beating Rodney with his truncheon.' Now would you like me to slow down - or stop?

Julie Could Not Stop

Julie was driving a people carrier full of ten screaming kids through the high street looking for a space. Too frazzled to effectively pay attention, she coasted right through a stop sign. A man in a passing car leaned out of his window and yelled, "Hey, lady, have you forgotten how to stop?" Julie out of her window and yelled back, "What makes you think these kids are all mine?" 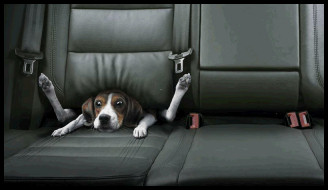 Be reassured, the dog was not hurt.

A patrol officer pulled over Enid for speeding.  Enid was a 65 year old lady from out of state. The officer asked to see her licence. 'Don't have one' Enid said. 'Can I please see the Vehicle registration' the officer asked firmly but politely. 'Nope' snapped Enid. In that case I will have to take you into the Police station and charge you there.  When they arrived they arresting officer said, to the duty sergeant.  This lady has no licence and no vehicle registration. 'Sure I do' said Enid sweetly.  'This officer has got in for me, the next thing is he will be saying that I was speeding'.

A traffic cop pulled alongside a speeding car on the motorway. Glancing into the car, he was astounded to see that the young lady, who was driving, was knitting. Realising that she was oblivious to his flashing lights and siren, the policeman wound down his window, turned on his loudspeaker and yelled, 'PULL OVER!' 'NO, 'the young lady yelled back, 'IT's A SCARF!' See more car jokes

Betty was sitting on a lawn sunning and reading, when she was startled by a Buick Enclave crashing through a hedge and coming to rest on her lawn. She helped the elderly driver out and sat him on a lawn chair. "My goodness," she exclaimed, "you are quite old to be driving!" "Yes", he replied, "I am old enough that I don't need a license." "What....NO LICENSE?" "Nope! The last time I went to my doctor he examined me, and asked if I had a driving license. I told I did have one and handed it to him. He took scissors out of a drawer, cut the license into pieces, threw them in the wastebasket and said, 'You won't be need this anymore.' So, I thanked him and left."

A teenage boy called Joel had just passed his driving test and asked Dad when they could discuss his use of the car. Dad said 'Ill make a deal with you Joel, You bring your grades up from a C to a B average, study your Bible a little, and get your hair cut. Then we'll talk about the car." The boy thought about that for a moment, decided he'd settle for the offer, and they agreed on it. After about six weeks his father said, "Joel, you've brought your grades up and I've seen that you have been studying your Bible. But I'm disappointed you haven't had your hair cut." "You know, Dad, I've been thinking about that, and I've noticed in my Bible studies that Samson had long hair, John the Baptist had long hair, Moses had long hair, and there's even strong evidence that Jesus had long hair." "Joel, did you also notice all those people walked everywhere they went?" Footnote: Joke kindly sent in by Ken Green.

A wife was making a breakfast of fried eggs for her husband when he burst into the kitchen. 'Careful, 'he cried, 'CAREFUL! Put in some more butter! Oh my goodness! you're cooking too many at once. TOO MANY! Turn them! TURN THEM NOW! We need more butter. Oh my word! WHERE are we going to get MORE BUTTER? they're going to STICK! Careful ... CAREFUL! I said be CAREFUL! You NEVER listen to me when you're cooking! Never! Turn them! Hurry up! Are you CRAZY? Have you LOST your mind? Don't forget to salt them. You know you always forget to salt them. Use the salt. USE THE SALT! THE SALT!' The wife stared at him in amazement, 'What in the world is wrong with you? You think I don't know how to fry a couple of eggs?' The husband calmly replied, 'I wanted to show you what it feels like when I'm driving.'
A Long Drive Many years ago Terry Wogan, an Irish radio presenter, said he had just returned from a holiday in Ireland. Visiting some friends and making conversation with the taxi driver, he said it was a long drive. The taxi driver replied: "Sure, but if it wasn't as long it wouldn't reach the house"!! Kindly sent by Ray Ottaway

A German has been ordered to stop laughing out loud in the woods after joggers complained that he was disturbing the peace. Accountant Joachim Bahrenfeld, 54, from Datteln said he goes to the woods after work and at weekends to have a good belly laugh.' It's part of living for me, like eating, drinking and breathing. I feel much better when I laugh, it's freeing and healthy, 'he said. Now he faces a £4,000 [$7000USD] fine or six months jail if he laughs out loud again after a jogger successfully took him to court saying he was disturbing the peace. German laugh expert Susanne Maier, who founded the German Laughter Academy which aims to teach serious minded Germans to lighten up, said, 'Mr Bahrenfeld has been doing what we advise our students to do and that is to find a place they like to have a good old giggle. It would do the person who made the complaint and the judge good to come along to our school and learn for themselves the benefits of letting it all go.'

Learning Fast Paul saw an advertisement for a Driving School that claimed it could teach anyone to drive a car in ten minutes. He 'phoned the school and asked, 'How can you possibly teach anyone to drive in only ten minutes?' The Driving School receptionist replied, 'Of course, it's a crash course.' Timing your Journey A friend of Will's wife, Yvonne Stokes, was stopped on the Fareham Road, Portchester, England, for travelling at 37 mph in a 30mph zone. She was, of course quite contrite and spoke politely to the young police constable who had stopped her. She was asked if she wanted to pay a fixed penalty fine or attend a defensive-driving course held daily at the local Community Centre. This she agreed to wholeheartedly. The police constable told her not to be late and that that being on time was crucial and that the classroom doors would be locked when each session began. Never a good time keeper, Yvonne was late for the first appointment and in trepidation knocked on the door. The policeman opened it and demanded to know why Yvonne was late. 'I was trying not to get another ticket,' mumbled Yvonne. The constable let her in. Coping with Worry Theresa: Doctor, I get so nervous and frightened during driving tests is there anything you can give me. Doctor: Just don't try not to worry about it. You'll pass eventually. Theresa: But I'm the examiner.
Blind Driver "Funny Shop Names" reminded me of an amusing incident. While driving down a highway I approached a van which had on the back "Caution, this van is being driven by a blind man".  As I passed this vehicle the name on the side indicated that it was a delivery van for installing window treatments including Venetian Blinds. See our Funny Shop Names
Footnote: Please send us your funny driving jokes jokes.