April Fool's hoaxes have a tantalising history.  One question is: could there be a common origin, or has the April Fool's idea arisen spontaneously in different countries in different eras? Joseph Boskin had an article entitled 'The Origin of April Fool's day' published in Associated Press in 1983.  The article reported that the mystery of the origin of April Fool's Day had finally been solved. Joseph Boskin, a History professor at Boston University, had discovered that the April Fool's celebration begun during the Roman Empire.  A court jester had boasted to Emperor Constantine that the Fool's and jesters of the court could rule the kingdom better than the Emperor could. In response, Constantine had decreed that the court Fool would be given a chance to prove this boast, and he set aside one day of the year upon which a fool would rule the kingdom. The first year Constantine appointed a jester named Kugel as ruler, and Kugel immediately decreed that only the absurd would be allowed in the kingdom on that day. Therefore the tradition of April Fool's was born. News media throughout the country reprinted the Associated Press story. But what the Associated Press reporter who had interviewed Professor Boskin for the story hadn't realised was that Boskin a hoaxer.  Not a word of the story was true, which Boskin admitted a few weeks later.  Boston University issued a statement apologizing for the joke, and many papers published corrections. Other researchers point to Chaucer's Canterbury Tales as the instigation of April Fools, however, Will and Guy could find no such reference, admittedly it's a difficult book to read.

One of the Best Victorian Hoaxes - Washing the White Lions

In the middle ages lions really were kept in the Tower of London. However, by Victoria's reign in 1837 all the lions had been moved to safer accommodation in Regents park.  In 1860 April Fool's day would fall on a Sunday, this gave some prankster a brilliant idea; to invite all and sundry to the Tower of London to see the annual washing of the white lions. 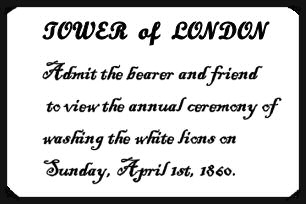 The invitation said: Admit the bearer and friend to view the annual ceremony of 'Washing the white lions' on Sunday, April 1st, 1860.  What happened on that fine April day was that thousands of people turned up, milled around, until one-by-one, it dawned on them that they had been hoaxed. Will and Guy wish that we could trace the name of the person who invented this 'Washing the White Lions' hoax.  We can only speculate that he was a member of the aristocracy.  Our reasoning is that he had time on his hands, and also the means to pay for and to distribute the invitations (no desktop publishing in 1860!). The hoaxer also introduced a few nice touches, for example, the Tower of London has a 'White gate' thus linking to 'white lions' in the minds of locals.  Also, lions had been kept in the Tower within living memory.  Perhaps it was reading reports in The Times that white lions were sighted in various parts of the British Empire, which sparked off this idea for an April Fool's hoax. Another fortuitous factor was that in 1860 the 1st of April fell on a Sunday, thus the perpetrator knew that people would be free to attend the 'Washing of the White Lions'.  Finally, the idea of washing white lions in April sounds like the right thing to do after the dirty mud of March. We wonder how many imitations of 'Washing the white lions' there have been down the years.  For example, 'Wash the white elephants', or 'Bathe the brown bears'.  Watch out, because our gut feeling is that another April first joke along these lines is overdue.

In 2000 a news release was sent to the media stating that the 15th annual New York City April Fool's Day Parade was scheduled to begin at noon on 59th Street and would proceed down to Fifth Avenue. According to the release, floats in the parade would include a 'Beat 'em, Bust 'em, Book 'em' float created by the New York, Los Angeles, and Seattle police departments. This float would portray ' themes of brutality, corruption and incompetence.' A 'Where's Mars?' float, reportedly built at a cost of $10 billion, would portray missed Mars missions. Finally, the ' Atlanta Braves Baseball Tribute to Racism' float would feature John Rocker who would be 'spewing racial epithets at the crowd.' CNN and the Fox affiliate WNYW sent television news crews to cover the parade. They arrived at 59th Street at noon only to discover that there was no sign of a parade, at which point the reporters realised they had been hoaxed. The prank was the handiwork of Joey Skaggs, an experienced hoaxer. Skaggs had been issuing press releases advertising the nonexistent parade every April Fool's Day since 1986.

Free Wine for Everybody:

In 1987 the Norwegian newspaper Bergens Tidende wrote that the state alcohol monopoly had over 10,000 litres of wine which had been confiscated from smugglers. People were invited to Bergen's main retail outlet to receive their share: it would be a sin to pour so much good quality wine down the drain. In the early morning hundreds of wine collectors appeared carrying all manner of containers: bottles, buckets, bowls, pots only to realise that they had been 'had'. One reason why people were so taken in could be the fact that alcohol in Norway is very expensive and government laws force its limited availability. Acknowledgements: We would like to thank: Famous Hoaxes through Time by Rekab Mailliw. Pub. Jan. 2006 The Museum of Hoaxes: Alex Boase c. 2003

Wine Awards (Not an April Fool's Hoax, but Interesting.....)

Have you ever browsed a restaurants wine list and been impressed by a stamp of approval such as: 'Wine Spectator Award of Excellence'?  Well, the Wine Trials author Robin Goldstein, tried an experiment, he submitted a fake wine list from a fake restaurant for the Wine Spectator's Award. Moreover all the wines added to his 'Reserva' list were dire, only one was above a rating of 80.  Normally wines on the 'Reserva' list would rate over 95. Goldstein's aim was to test the relationship between actual value and consumers' perceived value.  It transpires that any restaurant the pays the $250 fee can get an award.  Will and Guy wonder just how much of this skulduggery goes on with 'Awards'.

Burger King once published a full page advertisement in 'Today' announcing a new item to their menu: a 'Left-Handed Whopper' specially designed for the 33 million left-handed Americans.  According to the text, the new burger had the same ingredients as the original Whopper (lettuce, tomato, hamburger patty, etc.), but all the condiments were rotated through 180 degrees for the benefit of their left-handed customers. The next day Burger King followed-up with an advert saying that although the Left-Handed Whopper was a hoax, thousands of customers had gone into restaurants to request the new sandwich. In addition, according to Burger King, 'other customers requested their own 'right handed' Whopper burger.'

What threw Will and Guy off the track with the GeneDupe hoax was the publication, a respectable journal called the Economist.  However, when suspecting an April Fool's day the date of any press is then a give-away. The next thing to check is any names, Gene Dupe; hmmm...  Then there is Dr Paulo Fril, Guy was a bit slow on the uptake, until Will pointed out the anagram - Paulo Fril = April Fool. The GeneDupe's concept is intriguing, to literally bring exotic animals to life.  We are not talking about any exotic animals, but Unicorns and Dragons.  What's cunning is that in theory it would be possible to manipulate lizard DNA and create a new beast which you could call a dragon. The full article was expertly written in science speak, touching all the right buttons with its talk of mitochondria, endoplasmic reticulum and the Golgi apparatus.  These are all real structures that 'A' level biologists are familiar with.  Rather like a good conjurer brings a real rabbit out of the hat, so the GeneDupe article allows our imagination to create the method whereby genuine genetic techniques could be modified to producing mythical beasts such as gryphons and dragons. Will and Guy also appreciate the sting in the tail.  The end of the Economist the article draws attention to a previous Paulo Phil hoax, where he made a live goldfish made of gold.  The concept was to genetically engineer fish so that they produced gold deposits in their skin cells.  What next Dr Paulo - pigs that fly?

Seat Sport UK announced that they had created the driverless racing car. The clue that it was not genuine was the release date - Sunday April 1st 2007. Interestingly, the idea may come to pass one day, racing cars being driven remotely from the pits.  Think of the weight saving, not to mention the benefit of not have to worry about 'G' Force.

One of our favourite hoaxes in 2008 was a spoof BBC trailer showing penguins migrating from the Antarctic to rain forests in S. America. Most convincing. April Fool's day penguin hoax Fake products in catalogues are a good wheeze, the best of this genre was squirrel underpants.

Famously, Google launched Gmail on the 1st April 2004.  People assumed it was an April Fool's Day hoax, however, when it turned out to be true, Gmail and Google got a second round of free publicity - clever marketing stuff. 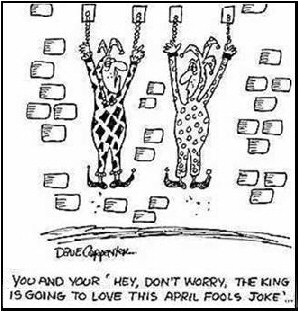 April Fool's gone past You're the biggest fool at last When April Fool comes again You'll be the biggest fool then The origin of this ditty is Hampshire, England.  The meaning is that you cannot play any more April Fool's jokes after midday, or else you become the fool.  However, in other European countries April Fools jokes last all day.