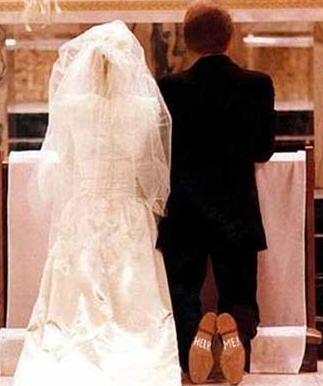 Ten Clean, Funny Jokes For The MC To Tell At A Wedding

Follow the Priest
After the blessing the priest said
to the newly married couple, 'follow me up to the altar'.  When the
priest reached the inner sanctum he turned around, and was amazed to see the
bride and groom crawling to the altar on their knees.

Clean Jokes to Work into
Your Wedding Speech

There are stories on this page for everyone.  Whatever the bride and groom's circumstances
an MC (master of ceremonies) is sure to find a funny wedding speech joke
here.

How To Avoid Marriage

'Darling,' says Barry to his wife, Sarah, 'I invited a friend home
for supper.'

'What? Are you crazy?' Sarah splutters, 'The house is a mess, I
didn't go shopping, all the dishes are dirty, and I don't much feel like
cooking a fancy meal.'

'I know all that,' murmurs Barry.

'Then why
did you invite a friend for supper?' explodes Sarah.

'Because the poor
fool's thinking about getting married,' concludes Barry.

Rupert and Elaine, young couple, got married and went happily on their
honeymoon.
When they got back, Elaine immediately 'phoned her mother and
her mother obviously asked, 'How was the honeymoon, dearest?'

'Oh, Ma,' she replied, 'the honeymoon was wonderful. So romantic...'

Then Elaine
burst out crying. 'But, Ma, as soon as we returned home Rupert started using
the most ghastly language... saying things I've never heard before! I mean,
all these awful 4-letter words! You've got to come get me and take me
home.... Please Ma.'

'Calm down, Elaine!,' said her mother, 'Tell me, what could be so
awful?  What 4-letter words?'
Still sobbing, Elaine whispered, 'Oh,
Ma...words like dust, wash, cook, and iron.'

Molly and Peter have been married for
almost 48 years and have raised a brood of 12 children and are blessed with
23 grandchildren.

When asked the secret for staying together all that time, Molly
replies, 'Many years ago we made a promise to each other: the first one
to pack up and leave has to take all the kids.'

How To Celebrate Marriage 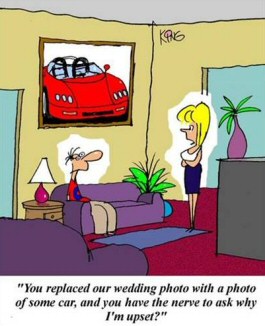 While enjoying a lunchtime pint in a Newcastle pub in the Scotswood Road,
four elderly Geordies* were discussing everything from football, the economy,
to the weather, to how things used to be in the "good old days."

Eventually the conversation moved on to their wives. One bloke turned
to the guy on his right and asked, 'Eh, Alan, aren't you and your lass
celebrating your fiftieth wedding anniversary soon?'

'Well, are you gonna do anything special to celebrate, man?'
another bloke asked.

Alan pondered this for a moment, then replied, 'For our twenty-fifth
anniversary, I took Hazel to Sunderland. Maybe for our fiftieth, I'll go
down there and get her back.'

*Geordie - is a regional
nickname for a person from the Tyneside [NE] region of England, or the name
of the dialect of English spoken by these people.

The Logic of
Marriage - A Child's View

Jack, a very young lad aged 4 years, says to his father, 'Daddy, Daddy, I
want to get married.'

His father explains, 'For that Jack, you have to have a boy and a girl.'

'Who?' splutters his Dad.

'I don't see why not?' Jack responds, 'You married mine!'

How To Make A Marriage
Successful 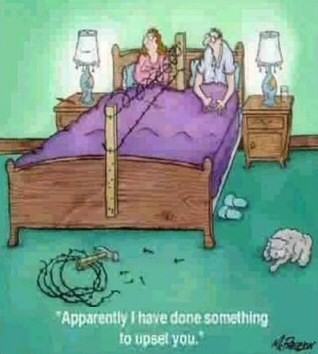 Bigamist?
Do you know the
punishment for bigamy?
Two Mothers-in-law.

Vicky, young single lady visits the local dating agency and explains,
'I'm looking for a husband. Can you please help me to find a suitable
one?'

'Well, let me see.' Vicky says, 'He needs to be fine looking, polite,
humorous, sporty, knowledgeable, good at singing and dancing. Willing
accompany me the whole day at home during my leisure hours, if I don't go
out. Telling me interesting stories when I need companion for conversation
and be silent when I want to rest.'

Never Be Afraid to Ask
for Help

What more can Will and Guy say!  If all else fails, asking for help
will get you a laugh and buy you time.

At a wedding ceremony at which Father Brian
Hamilton was officiating, he was seen to raise his hand in order to give the
final blessing at the end of the service.

Louise, the bride, totally
misunderstood this gesture and surprised the vicar with a high-five.

Not
wanting to exclude Mark, the groom, Father Brian also offered him a
high-five.

Father Brian was eventually able to give the blessing, this
time with the laughter of the guests ringing in his ears.

If you need any ideas for wedding
favours, see ido.co.uk.

The Seven Ages of the
Married Cold 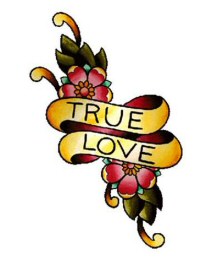 2nd year -
'Listen, sweetie, I don't like the sound of that cough. I've 'phoned the
doctor and he's going to stop by here and take a look at you. Why don't you
just go to bed and get the rest you need? I'll bring you something to eat
when you're hungry.'

7th year - 'For Pete's sake, stop sneezing. Are you trying
to give me pneumonia? You'd better pick up some tissues while you're at the
supermarket.'

Footnote:
No.10 above, was kindly sent by Solly, a regular reader, who also enjoys our
Joke of the Day.

Thanks to readers' letters Will and Guy have collated more MC wedding
jokes, which are suitable for telling at the stag night, or the reception itself.

While the bride was walking in step
with the wedding march, family and friends of the groom were horrified
to hear her repeating these 3 words...

"Dear, don't expect the first few meals to be great.
It takes time to
find the right restaurant." 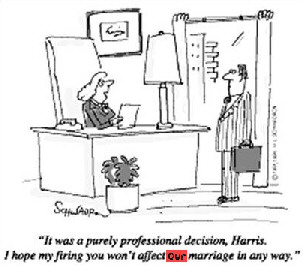 A man was walking in the street when he heard a voice. "Stop! Stand
still! If you take one more step, a brick will fall down on your head
and kill you." The man stopped and a big brick fell right in front of
him. The man was astonished.

He went on, and after awhile he was going to cross the road. Once
again the voice shouted: "Stop! Stand still! If you take one more step a
car will run over you and you will die." The man did as he was
instructed, just as a car came careening around the corner, barely
missing him.

"I am your guardian angel," the voice answered.

"Oh yeah?" the man asked. "And where the hell were you when I got
married?"

As the last nupuals that I attened there were a priest and a minister.

A Romanian groom is trying to pay for his marriage by
selling advertising space on his wedding tie. Tudor Ciora, 26, from Sibiu,
has set up a website for bidders and he hopes that he'll easily pay for the
ceremony and some special presents.

Those Wanting to
Be Married

Father Henry was planning a wedding at the close of the morning service. After the benediction Father Henry had planned to call the couple down to be married for a brief
ceremony before the congregation. For the life of him, he couldn't think of the names of those who were to be married.

'Will those wanting to get married please come to the front?'  Father Henry requested.

Men always want to be a woman's first love;
women like to be a man's
last romance. -
Oscar Wilde.

The order of speeches is traditionally as follows:

The father of the bride
usually talks fondly about his daughter. As with most speeches, it is
accepted that a mixture of affectionate anecdote and humour generally works
well. He then toasts the bride and groom.

*If the bride is to make a speech it should take place following the
groom's. It may seem obvious, but joint speeches should be co-ordinated well
beforehand since both will probably wish to say much the same thing.

The best man's speech now follows. He thanks the bride
and bridegroom on behalf of the bridesmaids and himself for asking them to
be part of their special day and for the gifts they have received and then
he reads out telegrams, cards, e-mails or other messages from friends and
relatives who couldn't be at the wedding. He will then go on to talk about
the groom in what can be the highlight, or in some cases lowlight, of the
wedding speeches. Humour and anecdote abound.  Finally the best man
should then propose a toast to the parents of the bride and bridegroom.
A modern trend is also for the
maid-of honor to make a speech.

Will and Guy say that if you are looking for help in preparing your
wedding
speech then please spend some time reading our carefully prepared pages.
If you find any other funny wedding speech jokes, then please send them to
us.