The airline had a policy that required the first officer to stand at the door while the passengers exited, smile, and give them a - 'Thanks for flying XYZ airline'
.

Finally, everyone had gotten off except for this little old lady walking with a cane.  She said, 'Sonny, mind if I ask you a question?'  Why no Ma'am', said the pilot, 'What is it', the little old lady said, 'Did we land or were we shot down?'

2)
Pilots Are Best of Friends 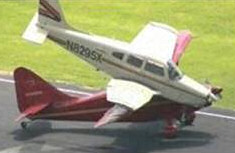 While nobody was seriously hurt, Will and Guy
have learned that at an aerodrome just northeast of Fort Worth, Texas, USA a
Piper aircraft landed on the top of another which was about to take off.
We have managed to find these pictures which we expect our readers to find
absolutely amazing considering nobody was badly hurt in the accident.

It has been suggested that the two pilots are,
in fact, next door neighbours and were talking together on the radio just
before the crash. This is encouraged at this particular airport because it
has no control tower to direct the planes. We have not been able to confirm
this; we can, however, imagine them continuing their chat over the garden
fence with a couple of beers, when they get home.

We have a friend who is an airline pilot.  Her name is Helga and she is a woman.  It is interesting to note that in English there is no female word for pilot.
Actress yes, but pilotess no.

Waiting a while
Helga then heard the man say, 'Well, I suppose it's
alright as long as they don't
let her touch anything.'

From a Stingem employee....'
Welcome aboard Stingem Flight X to YYY.'
We are pleased to have some of the best pilots in the industry... Unfortunately, none of them are on this
flight...!'