You Have Two Choices

Will says that this is the most uplifting presentation that he has seen this year.  Our only concern is what is the best medium for the message, PowerPoint or plain text.  On reflection, we suggest that you start with the PowerPoint Presentation and only revert to the text below if you want a print out of the message. 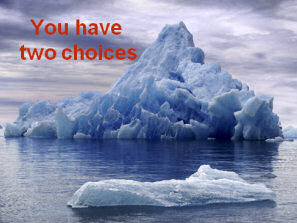 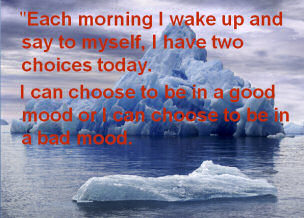 See the uplifting story of Jerry, with his amazing attitude to life.

You Have Two Choices

Jerry is the manager of a restaurant. He is always in a good mood. When someone would ask him how he was doing, he would always reply: 'If I were any better, I would be twins!' Many of the waiters at his restaurant quit their jobs when he changed jobs, so they could follow him around from restaurant to restaurant. Why？ Because Jerry was a natural motivator. If an employee was having a bad day, Jerry was always there, telling him how to look on the positive side of the situation. Seeing this style really made me curious, so one day I went up to Jerry and asked him： 'I don't get it! No one can be a positive person all of the time. How do you do it?' Jerry replied, 'Each morning I wake up and say to myself, I have two choices today. I can choose to be in a good mood or I can choose to be in a bad mood. I always choose to be in a good mood. Each time something bad happens, I can choose to be victim or I can choose to learn from it. I always choose to learn from it. Every time someone comes to me complaining, I can choose to accept their complaining or I can point out the positive side of life. I always choose the positive side of life.' 'But it's not always that easy,' I protested. 'Yes it is,' Jerry said. 'Life is all about choices. When you cut away all the junk every situation is a choice. You choose how you react to situations. You choose how people will affect your mood. You choose to be in a good mood or bad mood. It's your choice how you live your life.' Several years later, I heard that Jerry accidentally did something you are never supposed to do in the restaurant business.  He left the back door of his restaurant open  And then in the morning, he was robbed by three armed men.  While Jerry trying to open the safe box, his hand, shaking from nervousness, slipped off the combination. The robbers panicked and shot him. Luckily, Jerry was found quickly and rushed to the hospital. After 18 hours of surgery and weeks of intensive care, Jerry was released from the hospital with fragments of the bullets still in his body.... I saw Jerry about six months after the accident. When I asked him how he was, he replied, 'If I were any better, I'd be twins. Want to see my scars?'  I declined to see his wounds, but did ask him what had gone through his mind as the robbery took place. 'The first thing that went through my mind was that I should have locked the back door,' Jerry replied. 'Then, after they shot me, as I lay on the floor, I remembered that I had two choices: I could choose to live or could choose to die. I chose to live.' 'Weren't you scared' I asked? Jerry continued, 'The paramedics were great. They kept telling me I was going to be fine. But when they wheeled me into the Emergency Room and I saw the expression on the faces of the doctors and nurses, I got really scared. In their eyes, I read 'He's a dead man. I knew I needed to take action.' 'What did you do?' I asked. 'Well, there was a big nurse shouting questions at me,' said Jerry. 'She asked if I was allergic to anything.'  'Yes,' to bullets, I replied. Over their laughter, I told them: 'I am choosing to live. Please operate on me as if I am alive, not dead.' 'Jerry lived thanks to the skill of his doctors, but also because of his amazing attitude. I learned from him that every day you have the choice to either enjoy your life or to hate it. The only thing that is truly yours - that no one can control or take from you - is your attitude, so if you can take care of that, everything else in life becomes much easier. Now you have two choices to make: 1. You can ignore this message or 2. You can learn and apply the lessons from this story.

Honesty - The Man in the Glass

When you get what you want in your struggle for self And the world makes you king for a day, Just go to a mirror and look at yourself, And see what that man has to say. For it isn't your father or mother or wife, Who judgement upon you must pass; The fellow whose verdict counts most in your life Is the one starring back from the glass. He's the fellow to please, never mind all the rest. For he's with you clear up to the end, And you've passed the most dangerous, difficult test If the man in the glass is your friend. You may fool the whole world down the pathway of years. And get pats on the back as you pass, But your final reward will be the heartaches and tears If you've cheated the man in the glass. by Dale Wimbrow [Copyrighted in 1934]

The Rose - An Uplifting Story

John Blanchard stood up from the bench, straightened his Army uniform, and studied the crowd of people making their way through Grand Central Station. He looked for the girl whose heart he knew, but whose face he didn't, the girl with the rose. His interest in her had begun thirteen months before in a Florida library. Taking a book off the shelf he found himself intrigued, not with the words of the book, but with the notes pencilled in the margin. The soft handwriting reflected a thoughtful soul and insightful mind. In the front of the book, he discovered the previous owner's name, Miss Hollis Maynell. With time and effort he located her address. She lived in New York City. He wrote her a letter introducing himself and inviting her to correspond. The next day he was shipped overseas for service in World War II. During the next year and one month the two grew to know each other through the mail. Each letter was a seed falling on a fertile heart. A romance was budding. Blanchard requested a photograph, but she refused. She felt that if he really cared, it wouldn't matter what she looked like. When the day finally came for him to return from Europe, they scheduled their first meeting - 7:00 PM at the Grand Central Station in New York. 'You'll recognize me,' she wrote, 'by the red rose I'll be wearing on my lapel.' So at 7:00 he was in the station looking for a girl whose heart he loved, but whose face he'd never seen. I'll let John Blanchard tell you what happened: A young woman was coming toward me, her figure long and slim. Her blonde hair lay back in curls from her delicate ears; her eyes were blue as flowers. Her lips and chin had a gentle firmness, and in her pale green suit she was like springtime come alive. I started toward her, entirely forgetting to notice that she was not wearing a rose. As I moved, a small, provocative smile curved her lips. 'Going my way, sailor?' she murmured. Almost uncontrollably I made one step closer to her, and then I saw Hollis Maynell. She was standing almost directly behind the girl. A woman well past 40, she had greying hair tucked under a worn hat. She was more than plump, her thick-ankled feet thrust into low-heeled shoes. The girl in the green suit was walking quickly away. I felt as though I was split in two, so keen was my desire to follow her, and yet so deep was my longing for the woman whose spirit had truly companioned me and upheld my own. And there she stood. Her pale, plump face was gentle and sensible, her gray eyes had a warm and kindly twinkle. I did not hesitate. My fingers gripped the small worn blue leather copy of the book that was to identify me to her. This would not be love, but it would be something precious, something perhaps even better than love, a friendship for which I had been and must ever be grateful. I squared my shoulders and saluted and held out the book to the woman, even though while I spoke I felt choked by the bitterness of my disappointment. 'I'm Lieutenant John Blanchard, and you must be Miss Maynell. I am so glad you could meet me; may I take you to dinner?' The woman's face broadened into a tolerant smile. 'I don't know what this is about, son,' she answered, 'but the young lady in the green suit who just went by, she begged me to wear this rose on my coat. And she said if you were to ask me out to dinner, I should go and tell you that she is waiting for you in the big restaurant across the street. She said it was some kind of test!' It's not difficult to understand and admire Miss Maynell's wisdom. The true nature of a heart is seen in its response to the unattractive. Footnote: Please send us your uplifting story.

Making presentations in PowerPoint is satisfying, moreover, it's easy to get started. The PowerPoint program is intuitive to learn and easy to create your own PPT slides and build them into a slide show.  If you have Microsoft Office you may find that you already have PowerPoint along with Word and Excel. One way to begin is simply to open any example presentation.  Just download one of our free PPT files and open it with PowerPoint.  As you examine the slides, so it will become obvious how to add pictures and titles, if you do get stuck, ask the wonderful built-in 'Help'.  To make an inspirational slide show requires these skills; Good luck with creating your inspirational PowerPoint Presentation Will and Guy