Will and Guy's selection of funny stories from teachers.  Out of
the mouths of babes ....

Martha and the Whale 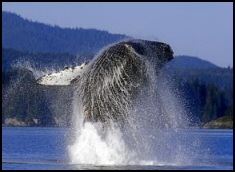 A little girl called Martha was talking to her teacher about whales.

The teacher said it was physically impossible for a whale to swallow a
human because even though it was a very large mammal its throat was very
small.

Martha stated that Jonah was swallowed by a whale.

Irritated, the teacher reiterated that a whale could not swallow a human;
it was physically impossible.

The little girl said, 'When I get to heaven I will ask Jonah'.

The teacher asked, 'What if Jonah went to hell?'

Martha replied, 'Then you ask him'.

Know Your Apples
- Out of the Mouth of Babes

Here is the scene: The children were lined up in the cafeteria of a Church elementary school for lunch.

At the head of the table was
a large pile of apples.  The nun made a note, and put it on the apple tray...

'Take only ONE. God is watching.'

Moving further along the lunch line, at the other end of the table was a large pile of
chocolate chip cookies.

A child had written a note, 'Take all you want. God is watching the apples.'

A nursery school teacher was observing her classroom of children while they were drawing. She would occasionally walk around to see each child's
work.

As she got to little Sarah who was
working diligently, she asked what the drawing was. Sarah replied, 'I'm drawing God.'

The teacher paused and said, 'But no one knows what God looks like.'

Sarah replied, 'They will in a
minute'

Boot on the Wrong Foot?

This tale is based on a true story told to Will by a friend [Tessa] who is an nursery schoolteacher in Drayton near Portsmouth; names have been changed to protect the
guilty.

Marlon asked the teacher to help him get his shoes on at the end of a busy day. After quite a struggle with the shoes, which were a little tight, Tessa finally got them on. 'They're on the wrong way
round, Miss,' mumbled Marlon.

She realises that he is right; they are on the wrong feet. Staying calm she and swaps them over for him.

'They're not my shoes, Miss', Marlon murmurs again.

Tessa fights
hard to keep her cool and asks Marlon why he hadn't told her before. She then kneels down again and helps him pull the shoes off.

'These aren't my shoes, they're my brother's and Mum told me not to tell
anyone.'

At this point Tessa can feel tears coming. She helps him back into his shoes. She gets him into his coat and wraps his scarf round his neck.

'Where are your gloves, Marlon?' asks Tessa quietly.

Job for the Boys?

Will and Guy were once members of the teaching profession and we have found
this amusing quote in the 'Handbook on Health and Safety' published by a British
Teachers' Union: 'Every school should have a H&S rep. There are laws that
protect their status, they are allowed time to train and perform their duties,
and they can close an unsafe school!  If you are interested in doing this please
contact the regional centre.'

Will and Guy believe that several pupils have applied for this post!

Question: The race of people known as Malays come from
which country?
Answer: Malaria

Question: What was Sir Walter Raleigh famous for?
Answer: He is a noted figure in history
because he invented cigarettes and started a craze for bicycles.

Question:  Explain the phrase "Free press".
Answer:  When your mother irons trousers
for you.

Question:  Where was Hadrian's Wall built?
Answer:  Around Hadrian's garden

Question:  Give a reason why people would want to
live near a power lines?
Answer:  To get electricity faster.
[That said, can you think of one good reason?!]

Question:  What is the meaning of "Varicose"
Answer:  Nearby

Question:  Name one of the Roman's greatest
achievements.
Answer:  To learn Latin.

Footnote:
Please send us your funny teacher
stories, or 'Out of the mouths of babes' ....