Santa and Banta are two Sardarji's who are good friends.
Most of time each of them tries to outsmart the other and this
creates humour.  Most of their conversations are funny and are
called Santa Banta jokes.

Santa and the Clock

Santa is in Delhi. He is walking on a street which has a Clock
Tower when someone asks him if he wants to buy the clock on the
Tower. Santa says agrees.

'Give me a thousand rupees and I'll go get a ladder.' The man
took the thousand and disappeared. Having waited for several hours
the Santa figures he has been made a fool by that man.

On the next day Santa is again walking along the same street and
the same man asks him to buy the clock. 'Give me a thousand rupees
and I'll go get a ladder.'

Santa gives him another thousand and says, 'Oye, I am not a fool.
This time, you wait and I'll go get a ladder.'

Santa and The Lottery
Ticket

Banta finds himself in considerable trouble. His business has
gone bust and he has serious financial concerns. He's so desperate
that he decides to ask God for help. He goes into the temple and
begins to pray:
'Oh God, please help me, I've lost my business
and if I don't get some money, I'm going to lose my house as well,
please let me win the lotto.'

Lotto night arrives and somebody else wins it.

Banta goes back to the temple, 'God, please let me win the lotto,
I've lost my business, my house and I'm going to lose my car as
well.'

Lotto night comes and Banta still has no luck!! Back to the
temple he goes.

'God, why have you forsaken me? I've lost my
business, my house, my car and my wife and children are starving. I
don't often ask you for help and I have always been a good servant
to you. Why won't you just let me win the lotto this one time so I
can get my life back in order?'

Suddenly there is a blinding flash of light as the sky parts open
and the Banta is confronted by the voice of the Lord, 'OYE BANTA,
YOU HAVE TO BUY THE TICKET FIRST.'

Santa goes into a bar in New York.

Santa and the Wedding

Santa and Jeeto were preparing wedding cards for their son at the
printers.

Jeeto was not very good at English so she asked the printer to
help her. After the printer had presented her with a draft, she
quickly pointed out that the "RSVP " was missing .

The printer was surprised by Jeeto's knowledge and asked her if
she knew what it meant.

Jeeto started to think and after much thought he replied, 'Vait!
I remember. I remember - RSVP.  It means "Remember, Send Vedding
Present."'

Santa enters a shop that sell curtains. He announces to Gurdaya,
the salesman, 'I would like to buy a pair of green curtains.'

The salesman assures him that they had a large selection of green
curtains. Gurdaya shows him several patterns, but Santa seems to be
having a hard time choosing.

Finally, he selects a smashing green floral print. The salesman
asked what size curtains he requires.

'Fifteen inches? ' explodes Gurdaya. 'That sounds a very small
amount, what room are they for?'

Santa tells him that they aren't for a room, they are for his
computer monitor.

Gurdaya, an extremely surprised salesman replies, 'But, sir,
computers do not have curtains!"'

Santa, hard of hearing, realises that he needs to buy a hearing
aid, but he feels unwilling to spend too much money.

'How much do they cost?' he asks Manbir, the shopkeeper.

Manbir puts the device around Santa's neck instructing, 'You just
stick this button in your ear and run this little string down to
your pocket.'

'How does it work?' Santa inquires.

'For only £20 it doesn't work," Manbir replies, 'But when people
see it on you, they'll talk louder!'

Santa Has A Funny Dream 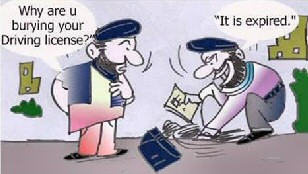 Santa kept having the same strange dream every night, so he made
an appointment to see a doctor.

Doctor Ajaib: What was your dream about?
Santa: I was being
chased by a vampire!

Doctor Ajaib: [smiling to himself] So... what is the scenery
like?
Santa: I was running in a hall way.

Doctor Ajaib: Then what happened?
Santa: Well that's the
weird thing. In every single dream, the same thing happened. I
always come to this door, but I can't open it. I keep pushing the
door and pushing the door, but it wouldn't budge!

Doctor Ajaib: Does the door have anything written on it?
Santa: Yes it does.

Doctor: And what do these letters say?
Santa: It says,
"Pull."

Santa returns from his first day at school and immediately
questions his father, 'Dad, today we had a spelling class. All the
other kids could only say half the alphabet, but I knew the whole
thing. Is that because I am a Sardar?'
'No son, that's because
you are intelligent.'

Santa seemed content with the answer, asks his father another
question, 'Dad, today we had Maths class. All the other kids could
only count from 1-10, I could count from 1 to 20. Is this because I
am a Sardar ?'
'No son, that's because you are intelligent,'
replies his father.

Happy with the answer, Santa poses another question to his
father, 'Dad, today we had medical examination, all the other boys
were shorter than me, I was at least twice their height. Is that
because I am a Sardar ?'
The father replies, 'No son, that's
because you are 33 years old.'