A funny joke is definitely a case of, 'one man's meat is another man's poison'.
For that reason we have selected a variety of funny pilot jokes, that we are sure that at least one will bring a smile to your face.

The airline had a policy that required the first officer to stand at the door while the passengers exited, smile, and give them a - 'Thanks for flying XYZ airline'
.

Finally, everyone had gotten off except for this little old lady walking with a cane.  She said, 'Sonny, mind if I ask you a question?'
Why no Ma'am', said the pilot, 'What is it', the little old lady said, 'Did we land or were we shot down?'

Taxiing down the tarmac, the 747 abruptly stopped, turned around and returned to the gate. After a two hour delay, it finally took off.

Barry, a worried passenger asked the steward, 'What was the problem?'

'The pilot was bothered by a noise he heard in the engine', explained the flight attendant, 'and it took us a while to find a new
pilot.'

We have a friend who is an airline pilot.  Her name is Helga and she is a woman.  It is interesting to note that in English there is no female word for pilot.
Actress yes, but pilotess no.

Waiting a while
Helga then heard the man say, 'Well, I suppose it's
alright as long as they don't
let her touch anything.'

From a Stingem employee....'
Welcome aboard Stingem Flight Xto YYY.'
We are pleased to have some of the best pilots in the industry... Unfortunately, none of them are on this
flight...!'

At the airport for a business trip, Maureen settled down to wait for the boarding announcement at Gate 35. Then she heard the voice on the public address system saying, 'We apologise for the
inconvenience, but BOAC Flight 937 will board from Gate 41.'

Maureen picked up her luggage and carried it over to Gate 41. Not ten minutes later the public address voice told her that Flight 937 would in
fact be boarding from Gate 35.

So, again, Maureen gathered her carry-on luggage and returned to the original gate. Just as she was settling down, the public address voice spoke again, 'We would like to
thank all passengers for participating in BOAC's physical fitness programme.'

Qantas is the only major airline that has never had an accident.  Apparently, after every flight, Qantas pilots
fill out a form, called a 'gripe sheet', which tells mechanics about problems with the aircraft.  The mechanics correct the problems; document their repairs on the form, and then pilots review the gripe
sheets before the next flight.

Never let it be said that ground crews lack a sense of humour. Here are some actual maintenance complaints submitted by Qantas'
Pilots and the solutions recorded by
maintenance engineers.

Exchanges between Qantas Pilots and their Engineers

Qantas Pilot: Noise coming from under instrument panel. Sounds like a midget pounding on something with a hammer.
Engineers: Took hammer away from midget 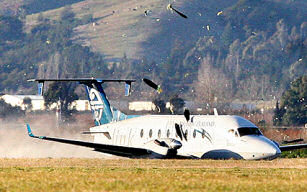 Parts fly off an Air New Zealand aircraft as it hits the ground during an
emergency landing in Blenheim, NZ. Photographed by Derek Flynn. Aircraft pieces
flew in the air as an Eagle Air plane with 17 people on board made an emergency
crash landing at Blenheim Airport on June 18th 2007 after landing gear failed.
The flight from Timaru to Wellington was diverted to Blenheim after the fault
was detected. Fire engines, ambulances, police and other support staff rushed to
the scene under a full emergency alert as the plane circled above Woodbourne for
about half an hour, preparing for a crash landing. No one was injured in the
crash landing.

An American pilot was flying the above plane over Australian when his plane malfunctioned and overshot the runway. When the pilot awoke, he
found himself in bed, in an Australian hospital.

So, the American pilot asked the doctor, 'Did I come here to die?' **

'No,' said the Australian doctor. 'You came here yesterday.' 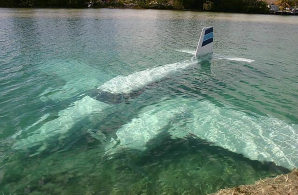 A pilot told nervous passengers travelling with a low-cost Spanish airline that nearly half the seats on their plane from Lisbon to Madrid were out of use due to a safety problem with a door, but it was nothing
to worry about, a Spanish newspaper reported.

There were three passengers in a light aircraft but only two parachutes.

The conversation went thus,  Seamus said, 'There have been many American Hall of fame footballers and
several people have won Olympic Gold medals, but there has only ever been one Irish Master Mind Champion.  So I'll take the first parachute and you two can fight it out for the last one'
.  With that
Seamus took a parachute and leapt out of the plane, which incidentally, by now was in considerable distress.

'How shall we decide who has the last parachute?'
, Larry asked Bruce. 'No worries'
, Bruce said, 'Yonder Irish Master Mind Champion has jumped out with my rucksack'.

Footnote:
Please write to Will and Guy if you have a funny plane or pilot joke.