There are three themes to Thanksgiving Day traditions, the family turkey
meal, parading and giving thanks. 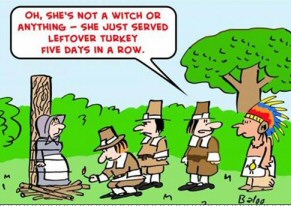 In New York City there are lots of engaging Thanksgiving traditions.
For example, a lot of New Yorkers don't buy the frozen Thanksgiving turkey.
They prefer to buy the bird live and then push it in front of a subway
train.  David Letterman

A strange Thanksgiving Tradition in the Chinese areas of San Francisco is
for engaged couples to buy a lock and key, then chain the lock to the Golden
Gate bridge and throw away the key.

Children love Macy's November Thanksgiving
Day parade through Manhattan, New York.  I wonder how many people have attended at least one parade since its inception in 1924*?

Some say Macy's parade did not start until 1927, the argument centers
over the naming of the 1924 version, 'Macy's Christmas Day Parade', the
confusion arises because it was held at Thanksgiving.

Old timers say they used to release balloons with prizes for those who found the balloon.  Many think it would be great if Macy's resurrected the tradition.

Amongst other cities, Detroit is at the forefront of celebrations.  Since 1924 they have their own parade down Woodward avenue.  Also their NFL team, the Detroit Lions always play a game on Thanksgiving, a tradition that goes back to 1934.

Governor William Bradford famously sent 'four men fowling'. They returned with deer, wild ducks
and geese. While they probably did not have turkey as we know it, the Pilgrims coined the word 'turkey'
as a generic term for any wild fowl. The resulting feast was more like an English harvest festival than a
true Thanksgiving observance.
See more pictures of the Pilgrim fathers.

"Well, then,' retorted the preacher, I guess you're a lost Cause!'