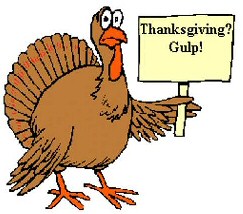 As usual, in the USA Thanksgiving falls on the fourth Thursday of November, this year that would be the 26th (and not the 19th).

When I was a young turkey, new to the coop, My big brother Jim took me out on the stoop, Then he sat me down, and he spoke real slow, And he told me there was something that I had to know; His look and his tone I will always remember, When he told me of the horrors of ..... Black November; Come about August, now listen to me, Each day you'll be thick, where once you were thin, And you'll grow a big rubbery thing under your chin. And then one morning, when you're warm in your bed, In'll burst the farmer's wife, and hack off your head; Then she'll pluck out all your feathers so you're bald'n pink, And scoop out all your insides and leave ya lyin' in the sink, And then comes the worst part, he said not bluffing, She'll spread your cheeks and pack your rear with stuffing. Well, the rest of his words were too grim to repeat, I sat on the stoop like a winged piece of meat, And decided on the spot that to avoid being cooked, I'd have to lay low and remain overlooked; I began a new diet of nuts and granola, High-roughage salads, juice and diet cola, And as they ate pastries, chocolates and crepes, I stayed in my room doing Jane Fonda tapes, I maintained my weight of two pounds and a half, And tried not to notice when the bigger birds laughed; But 'twas I who was laughing, under my breath, As they chomped and they chewed, ever closer to death; And sure enough when Black November rolled around, I was the last turkey left in the entire compound; So now I'm a pet in the farmer's wife's lap; I haven't a worry, so I eat and I nap, She held me today, while sewing and humming, And smiled at me and said, Christmas is coming...................... Author unknown

There are three themes to Thanksgiving Day traditions, the family turkey meal, parading and giving thanks.  Sarah Hale, a magazine editor, campaigned tirelessly for a national Thanksgiving day.  Hale wrote in Godey's Lady's Book, eventually Sarah's idea caught the president's eye and in 1863, President Lincoln proclaimed the idea of November Thanksgiving, to be precise, that last Thursday in November would be a national day of Thanksgiving.  In 2008, Thanksgiving day falls on November 27th, in 2009 it will be on November 26th. In Canada they set Thanksgiving Day on the second Monday in October.  Here it was Martin Frobisher who in Newfoundland first gave thanks for surviving his explorations in 1578.  Other countries who celebrate Thanksgiving include Argentina and Brazil. Japan has a national holiday on 23rd November to celebrate Labour / Thanksgiving day.

Governor William Bradford famously sent 'four men fowling'. They returned with deer, wild ducks and geese. While they probably did not have turkey as we know it, the Pilgrims coined the word 'turkey' as a generic term for any wild fowl. The resulting feast was more like an English harvest festival than a true Thanksgiving observance. See more pictures of the Pilgrim fathers

For each new morning with its light, For rest and shelter of the night, For health and food, For love and friends, For everything Thy goodness sends. Ralph Waldo Emerson [1803-1882] See more November Thanksgiving Traditions

See more dates for 2009.  Also day of the week for these festivals: