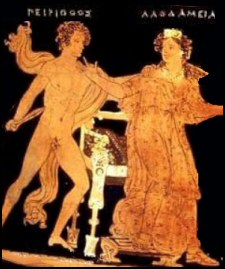 The country Greece brings to mind two images, ancient civilization, and a
European island holiday destinations.  Whether ancient or modern,
Greeks always do weddings in a special way.  Let us enjoy and
appreciate their longstanding and fascinating marriage customs.

The Red Scarf
In other countries brides are usually
seen wearing a variation on the white veil, but in Greek Weddings they have
the red scarf ritual.  This involves each close family member taking in
turns to wrap this red scarf around the bride three times.

If you were to visit Greek Cypriot bridegroom's just before the wedding
you may well see the same red scarf ritual.  Another variation is to
use the red scarf for relatives to throw money for the newly-weds. 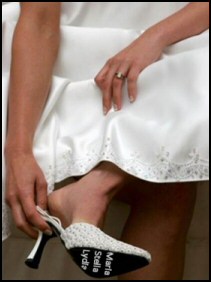 The Bride's Shoes
As a variation to throwing
the bouquet, the Greek bride writes the names of her single friend's
names on the bottom of her shoe.  At the end of the wedding night when she
finally removes here shoe, the
name which still appears on the shoe is the girl who will be the next bride.

Sugar Almonds and Red Ribbon
A further tradition Will and Guy have been told is the sugar coated
almonds which are placed on the tray with the crowns and which will later be
offered to the guests are also symbolic.

The white symbolises purity, the egg shape represents fertility and the
new life which begins with marriage.

The hardness of the almond represents the endurance of marriage and the
sweetness of the sugar symbolises the sweetness of future life. The odd
number of almonds is indivisible, just as a couple the bride and groom shall
remain undivided.

After the ceremony the almonds and ribbon are shared amongst the single
women who apparently if the ribbon is placed under their pillow that night
they will see in their dreams the man they will marry.

Shaving of the Groom
The groom is dressed by his koumbaro and witnessed by family and friends.

He is also shaved by the *koumbaro which is known as the "last shave".

The koumbaro then proceeds to putting the groom's shirt, waistcoat and
cravat on, all done whilst the violin and singer play and sing music to
praise the groom before his departure from his home.

The Newly-Wed Dance
This dance is performed half way through the night by the newly- weds to
honour their guests.  It is also a chance for their guests whilst the
couple is dancing to pin money on them as a gift.

Throwing of the Bouquet and Garter

This tradition has been passed on from other cultures.

At the end of the evening all single girls gather on the dance floor and
the bride at a fair distance from them with her back turned to them throws
her bouquet in the air at random. The girl who caches the bouquet is the next to be married.

Similarly, the groom detaches the garter from the bride's leg with his
teeth. Once his has successfully got it between his teeth all the single men
gather at a distance from the groom and with his back turned to them he
throws the garter at random. The man who catches it is the next one to be
married. All good fun we think.

As with all cultures, the Greek groom arrives at the church first and waits for the bride who is
customarily late. 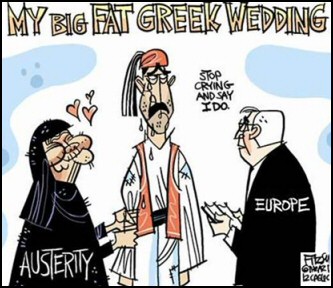 A young Greek man called Theo, announces to his mother that he's fallen
in love and that he is contemplating marriage.

He says, 'Just for fun, Ma, I'm going to bring over three young women and
would like you try and guess which one I'm going to marry.'

The mother agrees. The next day Theo brings invites three beautiful women
to his mother's house. They sit on the sofa and chat for a while with
family.

Theo then says, 'Okay, Ma, guess which one I would like to marry.'

She replies at once, 'The one on the left.'

'That's amazing, Ma. You're right, but how did you know?

The Greek mother answers back, 'I don't like her.'