Yellow Centipede, Or a New Bike for the Team Time Trial? 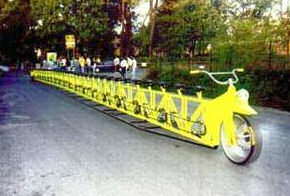 A tandem rider was stopped by a gendarme. 'What have I done, officer?' asks the rider. 'Perhaps you didn't notice sir, but your wife fell off your bike a kilometre back . . .' 'Mon Dieu', said the rider - 'I thought I'd gone deaf!'

What Drugs are These Cyclists Taking? 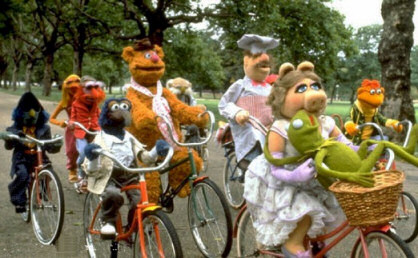 "I've really had it with my frog: he'll chase anyone on a bicycle." "So what are you going to do - leave him at the pond?  Give him away?  Sell him?" "No, nothing that drastic. I think I'll just confiscate his bike." 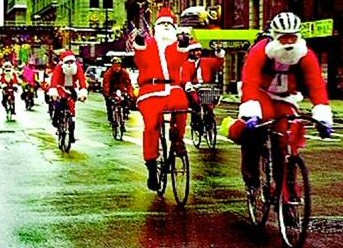 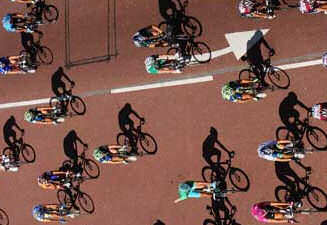 'Nobody knows the age of the human race, but everybody agrees that it is old enough to know better.' Anonymous 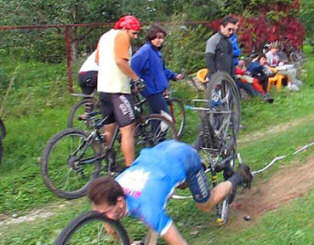 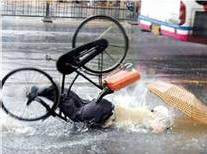 Learn to ride a bicycle. You will not regret it if you live. (Mark Twain) 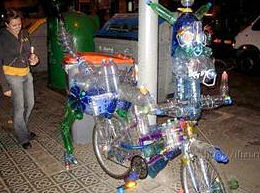 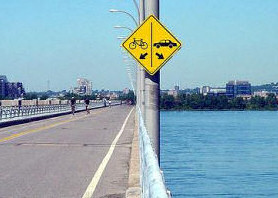 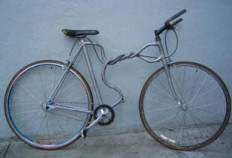 In 2007 the Tour de France Started in London

Amusing image of the laid-back style of the English preparation

My granny started cycling at 80 years old.  She has been doing a steady 4 miles per day.  The problem is now we don't know where on earth she is!

Traditionally the Tour de France has a Patron.  A leader who rules the peloton like a medieval warlord rules his kingdom.  Will and Guy remember back to the 1960s when Jacques Anquetil was lord of the peloton. Since then we have seen the role of Patron pass to Eddie Merckx, Bernard Hinault, Greg Lemond, and Miguel Induráin.  What's intriguing about the 2008 race is there is no natural Patron. So what are the characteristics of a Patron?  Firstly he has to be fierce rider; relentless at time trials, capable of sprouting wings on mountain stages.  More than pure cycling ability, Le Patron has a dominant Alpha male personality.  The final characteristics for dominating the peloton are the cunning of a fox, and the strategic planning of chess grandmaster. What's intriguing about the 2009 Tour de France is that Lance Armstrong was a former undisputed Patron, yet this year the number one rider of his Astana team is the 10-year younger, and more recent winner, Alberto Contador. Will Armstrong use his Patron powers to guide Contador to victory? Alternatively, will he use his wily skills to mastermind his own victory?

An Irish Perspective on the Tour de France

Two Irishmen were sitting in a pub when the Tour de France came on the main TV channel RTé. Mick and Seamus watched the cyclists for a while then Seamus asked, "Why do they do that?" "Do what?" said Mick "Go on them bikes for miles and miles, up and down the hills, round the bends.  Day after day, week after week.  No matter if it's icy, raining, snowing, hailing . . . why would they torture themselves like that?" "It's all for the money," says the Mick. "The winner gets half a million Euros (Dollars)." "I see." says the Seamus, "But why do the others do it?" Footnote: Please send us your funny Tour de France pictures