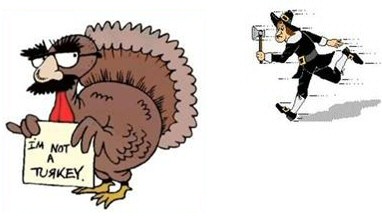 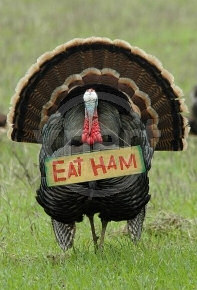 The turkey is a funny bird Its head goes bobble-bobble; And all he knows is just one word... And that is GOBBLE-GOBBLE! The Turkey Trot

The Turkey - A Most Difficult Bird to Cook

Louise was away from home on Thanksgiving Day for the first time and she was missing her home and family desperately. Louise decided to cook a turkey herself, just like her Mum used to, so that she could feel closer to her family. Louise returned home for the celebrations and recounted her experience to her Mum saying, 'Mum. it was so difficult to eat the turkey.' 'Why was that, dear' asked Mum in a concerned way, 'was it not cooked properly?' 'How would I know?' responded Louise, 'it wouldn't sit still.' See more on funny turkey suppers

Sarah new young bride calls her mother in tears. She sobs, 'Richard doesn't appreciate what I do for him.' 'Now, now,' her mother comforted, 'I am sure it was all just a misunderstanding.' 'No, mother, you don't understand. I bought a frozen turkey roll and he yelled and screamed at me about the price.' 'Well, the nerve of that lousy cheapskate,' says her mum.  'Those turkey rolls are only a few dollars.' 'No, mother it wasn't the price of the turkey. It was the aeroplane ticket.'  "Aeroplane ticket...." What did you need an airplane ticket for?' 'Well mother, when I went to fix it, I looked at the directions on the package and it said "Prepare from a frozen state," so I flew to Alaska.'

Thanksgiving is celebrated the whole world over with equal fervour and excitement, if not in the same numbers as in the US. Thanksgiving in India is obviously going to be different from Thanksgiving in the USA. For one thing, it is nearly impossible to get turkey there, and for another, instead of the whole nation celebrating with you, only a small handful of Christians pause to recognise the day. India is a multi-lingual, multi-cultural and a secular country; also known for its spirituality. With the spread of western culture, Thanksgiving is celebrated in quite a few parts of India, the major festivity is, however, observed by Christians in the state of Goa. 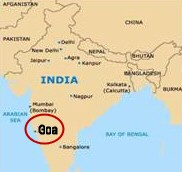 Thanksgiving is primarily celebrated in the state of Goa, under a different name. Thanksgiving is popularly known as 'Ladin' or 'Ladainha' in India. 'Ladin' literally means a litany to the Virgin Mary. During the Thanksgiving ritual, people thank God for all their material and spiritual benefits. Christians start preparing for Thanksgiving celebrations by buying wheat and gram [chickpea/lentils], candles, wine and coloured tinsel paper. A temporary altar is constructed which is decorated with flowers, vines and creepers. Celebrations also include singing of hymns and prayers. The local village choirmaster conducts the entire musical show. Another celebration associated with Thanksgiving, is the popular religious feast of conception of Mother Mary. It is a time for farmers to cut the first harvest of milk-filled corn from the rice fields and offer it to God. This is done to ask God's blessing for a good harvest in the approaching season. Though the date of celebrations varies in different parts of Goa, but generally it is celebrated on the 15th August every year.

An Exotic Thanksgiving Inspired by the Cuisine of India [Courtesy of Henry's Farmers Market, California, USA]. 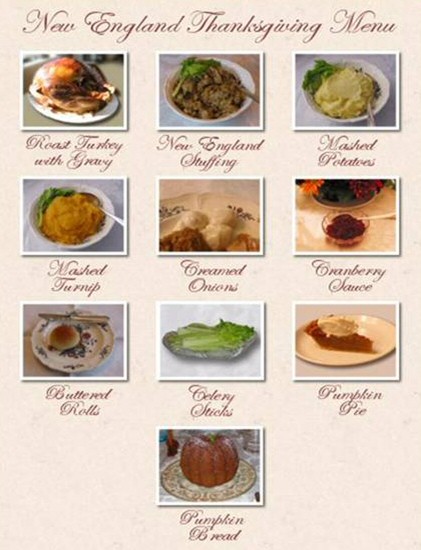 Healthy Tips for Cooking your Turkey from Will and Guy:

Skinless turkey pieces can be poached in water, wine, and/or broth with herbs and spices added.  This will keep the meat moist and add flavour from the poaching liquid. Since no fat is added, the turkey retains its nutritional benefits. Steaming is another healthy cooking method and because the turkey is surrounded by steam rather than water, none of the valuable nutrients leach out. Stir-frying uses very little oil and cooks bite-size turkey pieces quickly. The vegetables, herbs, spices, and various condiments cooked with the turkey add flavour and provide a healthy, low calorie, low fat dish. Grilling is becoming one of the most popular methods of cooking turkey and it is also one of the most healthy. The grilling process allows fat to drip away from the turkey as it cooks, keeping the meat nutritious and flavourful.

In places such as in New Mexico, the history of the turkey goes back at least 800 years. When Cortés invaded Mexico, he discovered the natives kept flocks of turkeys.  Biologists suspect that the Mesoamerican civilization domesticated the turkey Meleagris gallopavo. This culture developed in the Maya of Belize, Guatemala, and up through Mexico. All very different from today's celebration of Thanksgiving with the turkey at center stage.  Or was it?  While the surroundings were completely different, the time of year may have been nearer summer, but I expect the ancients new how to party on turkey.