Here is our collection of amusing tales about turkeys, some are the heroes
whilst others are the villains of the story.

Tommy and Billy were discussing their latest turkey shoot. Tommy says emphatically, 'I am never going to take my wife
Laura shooting with me ever again, Billy!'

'That bad, eh?' enquires
Billy smiling.
'Yeah, Laura did everything wrong, got nothing right.  She
chattered too much, constantly disturbed the undergrowth, loaded the wrong gauge shot in the gun, used
the wrong luring whistles and worst of all,' bellows Tommy, 'she shot more
turkeys than me!'

The Taylor's
were proud of their family tradition. Their ancestors had travelled to America with the Pilgrim Fathers on the Mayflower. They had included Congressmen, successful entrepreneurs, famous sports
people and television stars.

They decided to research and write a family history, something for their children and grandchildren. They found a specialist genealogist and writer to help them.  Only one
problem arose - how to handle Great Uncle Jefferson Taylor who was executed in the electric chair.

The writer said she could handle the story tactfully. When the book appeared the section about
Jefferson read:

Great Uncle Jefferson Taylor occupied a chair of applied electronics at an important government institution, he was attached to his position by the strongest of ties, and his death came as a great shock.

A Piece of Pumpkin Pie?

Jolene was only 8 years old and lived with family in the country with her parents
and brother.  Consequently they did not often have visitors from the
city.  One day Jolene's mother said that father was bringing two guests
home for Thanksgiving supper.

After they had enjoyed the turkey, Jolene went to the kitchen to help her
mother, and proudly brought in the first piece of pumpkin pie and gave it to
her father.  He then passed the plate to a guest.  When Jolene
came in with the second piece and gave it to his father, he again gave it to
a guest.

This was too much for Little Jolene, who blurted out, 'It's no use,
Daddy. The pieces are all the same size.'

What's the best thing to put into a pumpkin pie?  Your teeth.

"Well, then,' retorted the preacher, I guess you're a lost Cause!'

It was the Monday before Thanksgiving, Bobby Evans collapsed in a
Wal-Mart in Worcester Massachusetts.  Other customers gathered around
and the first-aider was summoned.  It did not look good for Bobby,
there was blood coming out of his ear, his face looked white and he was
unconscious.

The store manager dialled 911 and when the medical team arrived the first
thing they did was take off Bobby's hat, to everyone's amazement inside was a
partially frozen turkey.  What felled Bobby was the chill from turkey
numbing his brain.  The blood came from the giblets which had melted
and leaked over his hair and down into his ear. 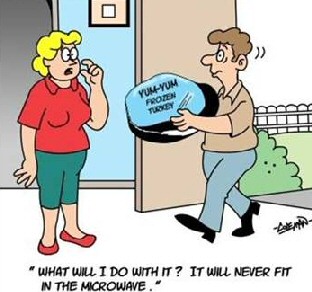 As it was Thanksgiving the manager took pity, and rather than prosecuting
the shop-lifter, gave him the partly thawed bird and sent Bobby on his way.
Two days later the manager got letter from Bobby apologising for his
behaviour and thanking the manager for his action.  Also inside the
envelope was $15, the price of his turkey.
See our funny Christmas stories.

A professional NFL team, the Philadelphia Eagles, had just finished their daily
practice session when a large turkey came strutting onto the field.  While
the players gazed in amazement, the turkey walked up to the head coach and
demanded to be given a chance to play at tight end.

Everyone stared
in silence as the turkey caught pass after pass and ran right through the
defensive line. When the turkey returned to the sidelines, the coach
shouted, 'You're superb. Sign up for the season, and I'll see to it that you
get a huge bonus.'

'Forget the bonus,' replied the turkey, 'What I
want to know is, does your season go past Thanksgiving Day?'

Early one November the turkey hunting party headed towards Meeke in
Minnesota.  Surprisingly, they could not find any turkeys.  Never
mind said, Jed, their leader we'll go back to the cabin, have breakfast then
try again.  I'll skip breakfast and keep on looking said Tommy Lee who
had come all the way from Texas especially for the shoot.

While the others had their breakfast they heard no end of gunshot.
After they finished their bacon and eggs they headed in the general
direction of the shooting.  They were greeted by Tommy Lee, who said, 'bring a truck, I've got me 5 of them'.

'Do we really need a truck for 5
birds,' said Jed?

'Birds?' said Tommy Lee, 'I've got me 5 sheep, I wasn't going to come all
this way from Texas and then go home empty handed'.

See more
'Only in Texas tales'.

The Ears of Wheat by
The Brothers Grimm

Ages upon ages ago, says the German grandmother, when angels used to
wander on earth, the ground was more fruitful than it is now. Then the
stalks of wheat bore not fifty or sixty fold, but four times five hundred
fold. Then the wheat- ears grew from the bottom to the top of the stalk.

But the men of the earth forgot that this blessing came from God, and
they became idle and selfish.

One day a woman went through a wheat-field, and her little child, who
accompanied her, fell into a puddle and soiled her frock. The mother tore
off a handful of the wheat-ears and cleaned the child's dress with them.

Just then an angel passed by and saw her. Wrathfully he spoke, 'Wasteful
woman, no longer shall the wheat- stalks produce ears. You mortals are not
worthy of the gifts of Heaven!'
Some peasants who were gathering wheat
in the fields heard this, and falling on their knees, prayed and entreated
the angel to leave the wheat alone, not only on their account, but for the
sake of the little birds who otherwise must perish of hunger.

The angel pitied their distress, and granted a part of the prayer. And
from that day to this the ears of wheat have grown as they do now.

A Thanksgiving in France

The first Thanksgiving after moving overseas, I decided to treat my
family to a traditional turkey dinner.

I went to the closest store, which happened to be French-speaking, and
approached the area where a variety of meats were laid out. Not being fluent
in French, I looked and tried to determine on my own whether the large
poultry breasts I saw were turkey or goose.

I pointed at the poultry breasts, then tucked my thumbs in my armpits,
flapped my arms, and said, 'Gobble, gobble?' The butcher broke into a smile
as he replied, 'Oui.'

Embarrassing, sure, but I ended up with a turkey and the butcher got a
laugh!

A tale by Monica Harris

Will and Guy have come across a Thanksgiving turkey story which we would
like to share with you. We cannot vouch for its veracity since it is
supposedly dated sometime in the 19th century.

A middle aged woman, perhaps we will call her Maisie, heard that fresh
turkey meat was far superior to that which had been frozen so she set off to
her local farm and purchased a fine, plump turkey from the willing farmer.

As Maisie took the bird home she could not help but look closely at it.
The turkey seemed to be watching her and Maisie felt a chill of horror as
she realised that she would have to decapitate it in the morning.

The next day began and Maisie found that she could not chop the bird's
head off. So she seized some ether from the medicine cabinet and put the
bird to sleep. As it was dozing she began to pluck the feathers from its
flesh, preparing it for the oven. As the last feather was removed; it is
said, that the plump, nude turkey woke up and seeing its state became irate
and angry.

The last we heard was that poor old Maisie was last seen being chased
around her kitchen by a plump but stark naked turkey. 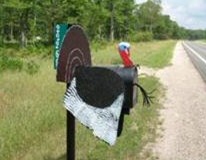 Young Simon was sitting in his grandmother's kitchen, watching her prepare the Thanksgiving meal.

'What are you doing?' Simon enquired.

'Wow, that's cool.' Simon remarked. 'Are you going to hang it next to the deer?'

The Tale of the Pregnant
Turkey

One year at Thanksgiving, my brothers and I were invited to my sister
Jenny's house for the traditional feast.

Knowing how gullible my sister is, we decided to play a practical joke.
My two brothers lured Jenny outside to check out some trees at the bottom of
the garden.

As soon as Jenny left I took the turkey out of the oven, removed the
stuffing, and replaced it with a partridge.  Then I replaced the bird
carefully in the oven.

Later, when the turkey was cooked my sister took the bird out of the oven
and when it had rested she started to carve it. Then she decided to add the
stuffing.  Much to her amazement she found the partridge.  At this
point our mother piped up, "Jenny you've cooked a pregnant bird!"  With
this Jenny started to cry.

It took my brothers and I until early evening to convince Jenny that
turkeys lay eggs, and don't give birth to live young.

When I was a kid in Indiana, we thought it would be fun to get a
turkey a year ahead of time and feed it and so on for the following
Thanksgiving. But by the time Thanksgiving came around, we sort of
thought of the turkey as a pet, so we ate the dog.  Only kidding.
It was the cat.
David Letterman

May your stuffing be tasty
May your turkey plump,
May your potatoes
and gravy
Have nary a lump.
May your yams be delicious
And your
pies take the prize,
And may your Thanksgiving dinner
Stay off your
thighs!