Will and Guy are collecting funny reptile stories and pictures.

Why I Was Late for Work 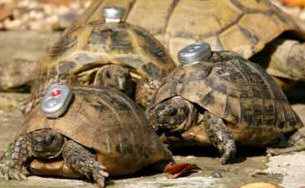 Jane Willimas was so fed up with looking for her tortoises that she has fitted them with a tracker device.  Jane
fixed the tracker device to their shells with a removable sticky pad.

A reptile in New Zealand has become the proud father of eleven at the age
of 111. Henry, the centenarian Tuatara resides at the Southland Museum and
Art Gallery and was a "grumpy old man" until he had a cancerous tumour
removed from his genitals in 2002. The gallery's Tuatara curator Lindsay
Hazley revealed Henry became less aggressive after the operation and more
keen on the opposite sex.

He was caught getting familiar with a female named Mildred last March.
Lindsay informs us, 'I went off the idea he was good for breeding, but once
the tumour was removed, he was no longer aggressive.'

All's Well That
Ends Well, as Shakespeare would have said.

A
frog walks into a bank to ask for a loan. He steps up to the counter and
asks for an application form from the cashier, Paddy Wack

'Hey,' says
the frog, 'I'd like to fill out an application for a loan.'

Paddy Wack
answers cooly, 'Do you have any collateral for this loan; something to stand
against your loan?'

The frog replies amiably, 'All I have is this
statue of a unicorn.'

'Oooh, I don't know,' mutters Paddy Wack, 'I'll
have to check this out with the manager.'

The bank manager looks at the statue and immediately
announces, 'Knick Knack, Paddy Wack. Give the frog a loan.'

Footnote:
Please send us your funny pictures of
frogs, toads, snakes or other reptiles.