I was pleasantly surprised how funny politician jokes could be.  What a
contrast between their soporific speeches and these witty one-liners.

'This
telephone is an amazing invention but who would want to use one of them?'
American President, Rutherford Hayes 1876.

'Edison's
electric light bulb is good enough for our transatlantic friends, but unworthy
of practical of scientific or practical men'.  British Parliamentary society set up to investigate electric lighting in 1878.

Jokes About Other Politicians

It seems that the more successful a politician becomes, the more funny
political jokes that they attract.  Thus for many up and coming stars,
being the butt of a political joke is a cross between a badge of honour and rite
of passage. 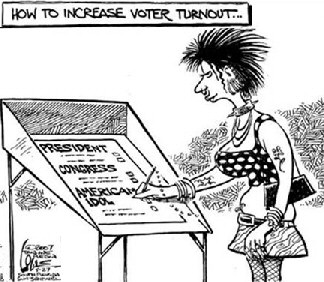 Politician in the Swim

What happens if a politician drowns in a river?
That is pollution.

What happens if all of them drown?
That is solution!!!

Another Tranche of Amusing Political Jokes by Politicians

The Vicar spoke to his curate. "I'm going away today, but I'll be back on
Saturday evening in time to conduct matins on Sunday morning. Will you make
sure the hymn numbers are put up on Saturday afternoon so that everything is
ready when the service begins?  They're all written on this piece of
paper apart from the first hymn."

"Yes, certainly Vicar, but what are you doing about the first hymn?"
asked the curate.

"It depends", said the Vicar. "It's Polling Day for the General Election
on Thursday.  The first hymn will depend on the result.  If the
Conservatives have a sufficient majority to form a government, it'll be 283,
"Now thank we all our God. However, if Labour has most seats and are going
to form the next government, then put up number 578, "Go labour on, spend
and be spent."

"Oh, there's just one thing," said the curate. Suppose the Liberal
Democrats have the majority, what number would you want me to put up in that
circumstance?"

"Oh, in that circumstance, it'll be 482, "God moves in a mysterious way
His wonders to perform."

These jokes are probably past their sell-by date, nevertheless I expect
that some satirist will rehash them for the latest batch of politicians.

1) 'A low voter turnout is an indication of fewer people going to the polls'.
George W Bush
[President USA]

2) Washington DC Newsflash: A tragic fire on Monday destroyed the personal library of President George W. Bush. Both of his books have been lost.

Presidential spokesman Ari Fleischer
said the president was devastated, as he had not finished colouring the second one.

3) Donald Rumsfeld is giving the president his daily briefing. He concludes by saying: 'Yesterday, 3 Brazilian soldiers were killed'.
'OH NO!'
the President exclaims. 'That's
terrible!'

His staff are stunned at this display of emotion, they watch nervously as the President sits, head in hands.
Finally, the President looks up and asks, 'How many is a brazillion?'

Did anyone tell you about the day when Lord Peter Mandelson was visiting
a primary school in England, and was taken into the room of a class
discussing words and their meanings. The teacher asked Lord Mandelson
whether he would care to lead a discussion on the word "Tragedy", so he
asked the class to give him an example.

A little boy stood up, and said, "If my best friend, who lives on a farm,
was playing in the field, and a tractor ran over him, and killed him, that
would be a tragedy".

"No," said Lord Mandelson, 'that wouldn't be a tragedy: that would be an
accident".
A little girl raised her hand: "If the school bus had fifty
boys and girls in it, and it drove over a cliff, killing everyone inside,
that would be a tragedy".

"I'm afraid not," explained Lord Mandelson; "That is what we would call a
great loss."
The room went silent. No child volunteered.

Lord Mandelson's eyes searched the room. "Can no one here give me an
example of a tragedy?"

At the back of the room, a little hand went up, and a quiet voice said,
"If a plane carrying you and Mr Brown was struck by friendly fire and blown
to smithereens, that would be a tragedy".

"Magnificent!" exclaimed Lord Mandelson, "That's right! And can you tell
me why that would be tragedy?"
"Well," said the quiet voice, "It has to
be a tragedy, because it certainly wouldn't be a great loss, and it probably
wouldn't be an accident."  Kindly send in by Les.

Gordon Brown is out jogging one morning, notices a little boy on the corner with a box. Curious he runs over to the child and says, 'What's
in the box sonny?'
To which the
little boy says, 'Kittens, They're brand new kittens.'

Gordon Brown laughs and says, 'What kind of kittens are they?  'Socialists', the child says.

'Oh that's
lovely, 'Gordon smiles
and he runs off.

A couple of days later Gordon is running with his colleague Tony Blair and he spies the same boy with his box just ahead. Gordon says to Tony, 'Watch this.'
and they both jog over to
the boy with the box.

Gordon says, 'Look in the box Tony, isn't
that cute? Look at those little kittens. Och aye laddie, tell my friend Tony what kind of kittens they are.'

The boy replies, 'They're
Tories.'

'What?'
Gordon says, 'I jogged by here the other day and you said they were Socialists. What's
changed? 'Well, 'the lad says, 'Their eyes are open now.'

Footnote:
Please write to Will and Guy if you have any funny politician jokes.