Basic Flying Rules for all pilots:

Tower to Cessna - What's your location

A RAF [Royal Air Force] engineering officers joke: What's the difference between a fighter pilot and his aircraft? 'The plane stops whining when you shut down the engines.'

My wife started taking flying lessons about the time of our divorce and she got her license shortly before our divorce was final, later that same year. Yesterday afternoon, she narrowly escaped injury in the aircraft she was piloting when she was forced to make an emergency landing in a rural area because of bad weather. The CAA (Civil Aviation Authority) issued a preliminary report, citing pilot error: She was flying a single engine aircraft in IFR (instrument flight rating) conditions while only having obtained a VFR (visual flight rating) rating. The report stated that the absence of a post-crash fire was likely due to insufficient fuel on board. No one on the ground was injured. The photograph below was taken at the scene and shows the extent of damage to her aircraft. She was very lucky ... 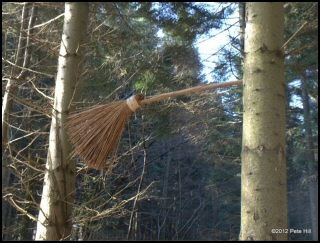