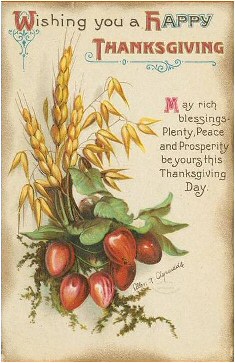 There are three themes to Thanksgiving Day traditions, the family turkey
meal, parading and giving thanks.

In New York City there are lots of engaging Thanksgiving traditions.
For example, a lot of New Yorkers don't buy the frozen Thanksgiving turkey.
They prefer to buy the bird live and then push it in front of a subway
train.  David Letterman

A strange Thanksgiving Tradition in the Chinese areas of San Francisco is
for engaged couples to buy a lock and key, then chain the lock to the Golden
Gate bridge and throw away the key.

Children love Macy's November Thanksgiving
Day parade through Manhattan, New York.  I wonder how many people have attended at least one parade since its inception in 1924*?

Some say Macy's parade did not start until 1927, the argument centers
over the naming of the 1924 version, 'Macy's Christmas Day Parade', the
confusion arises because it was held at Thanksgiving.

Old timers say they used to release balloons with prizes for those who found the balloon.  Many think it would be great if Macy's resurrected the tradition.

Amongst other cities, Detroit is at the forefront of celebrations.  Since 1924 they have their own parade down Woodward avenue.  Also their NFL team, the Detroit Lions always play a game on Thanksgiving, a tradition that goes back to 1934.

To borrow a line from WC Fields: 'Never work with children, animals, or
Thanksgiving turkeys'.

Thanksgiving 2008 marks the 61st anniversary of the National Thanksgiving
Turkey presentation.  Live Thanksgiving turkeys have been presented to
presidents since the days of Abe Lincoln.  However, the current form of
the ceremony dates back to President Harry Truman in 1947.

The turkey (and its alternate) are pardoned by the President on the
Wednesday before Thanksgiving.  The ceremony traditionally takes place
on the White House Rose Garden, and is a wonderful photo shoot opportunity.
The lucky turkey will then be sent to Disneyland, where it will be the grand
marshal of the Disney Thanksgiving Day Parade.

The tradition's origin is uncertain. One story claims that Harry Truman pardoned a turkey in 1947, but
the Truman Library has been unable to find any evidence for this. Another claims that the tradition dates back to Abraham Lincoln, in October 1863, pardoning his son Tad's pet turkey. Both of these stories have
been cited in recent presidential speeches.

Interestingly, the great American public is allowed to vote for the turkeys' names on the White House web site.
2007 lucky birds were 'May' and 'Flower'. In 2006's the turkeys pardoned were named Flyer and Fryer.  While in 2005's
turkeys were named Marshmallow and Yam were spared.  2004's were named Biscuit and Gravy; and 2003's were Stars and Stripes.
The 2008 winners, who were pardoned were Pumpkin and Pecan.

President Obama made the official presidential Thanksgiving pardon on
Wednesday, November 25.  A turkey called 'Courage' was spared along
with an alternative called 'Carolina'.

Crazy how one thing can set you off at a tangent.

Talking of yam,
this what Popeye said:
"I yam what I yam, and that's all that I yam." 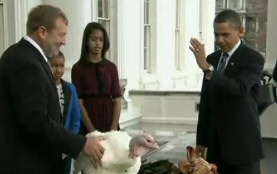 On the Wednesday before Thanksgiving 2011 President Obama pardoned two
turkeys as usual, this year they were called Liberty and Peace.

Sarah Hale, a magazine editor,
campaigned tirelessly for a national Thanksgiving day.  Hale wrote in Godey's
Lady's
Book, eventually Sarah's
idea caught the president's
eye and in 1863, President Lincoln proclaimed the idea of November Thanksgiving,
to be precise, that last Thursday in November
would be
a national day of Thanksgiving.  In 2010, Thanksgiving day falls on November 25th.

Governor William Bradford famously sent 'four men fowling'. They returned with deer, wild ducks
and geese. While they probably did not have turkey as we know it, the Pilgrims coined the word 'turkey'
as a generic term for any wild fowl. The resulting feast was more like an English harvest festival than a
true Thanksgiving observance.
See more pictures of the Pilgrim fathers

Origins of The Turkey

The history of the turkey goes back at least 800 years to New Mexico.  When Cortés invaded Mexico, he discovered
that the natives kept flocks of turkeys.  Biologists suspect that the
Meso-american civilization domesticated the turkey Meleagris gallopavo. This culture developed in the Maya of Belize, Guatemala, and up through Mexico.

In Cortés time it was all very different from today's celebration of
Thanksgiving with the turkey at center stage.  Or was it?  While the surroundings were completely different,
and the time of year may have been nearer summer, but I expect the ancients
new how to party on turkey!