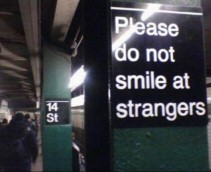 A funny joke is definitely a case of: 'One man's meat is another man's poison'. For that reason we have selected a variety of funny jokes, that we are sure that at least one will bring a smile to your face.

The Band. Arnold and his wife Florrie were walking across Southsea Common one Sunday afternoon. In the bandstand the combo was playing a catchy sounding tune, and Florrie said, 'I wonder what the name of that tune is.' Arnold noticed that there was a sign posted near the bandstand and said, 'It looks like they post the titles of the tunes they play. I'll go down and see.' A while later Arnold returned and said to Florrie, 'It's one I don't know, it's called the Refrain from Spitting.'

Harmonica. Jeremy walked into a shop which sold musical instruments and bought a very expensive mouth organ. As the shopkeeper wrapped up the instrument he said, 'You know is this is quite amazing. We normally don't sell many mouth organs, but this is the second one I've sold today.' 'Oh,' remarked Jeremy, 'that must have been our Monica'

You only need to mention fish and joke in the same sentence to get a giggle. Fishy?  An English tourist is on holiday in a Cornish village when he spots what he thinks is the village idiot sitting next to the horse trough. In his hand is an old stick, and tied to the end is a piece of string which is dangling in the water. The tourist decides to humour the fellow and asks, 'Have you caught anything yet?' The village idiot looks up and studies the stranger before answering, 'Aye, you be the ninth today.' Big Catch.  Michael and Peter went on a fishing trip. They hired all the equipment: the reels, the rods, bait, wading boots, rowing boat, the car and even a log cabin in the woods. No expense was spared for their yearly expedition. On the first day they went fishing they didn't catch a thing. The same thing happened on the second day, and on the third day. It continued like this until finally, on the last day of their vacation, Michael caught a fish. As they're driving home they're really depressed. Peter turns to his friend, Michael, and says, 'Do you realise that this one pathetic fish we have caught cost us £900?' Michael replies with a jaundiced smile, 'Crikey, it's a good thing we didn't catch any more!'

True Story From Will

Before retiring from teaching Will qualified as a first aider in order to instruct CPR [Cardio Pulmonary Resuscitation] to Year 10 students, with the help of Surrey Ambulance Service, as part of the PHSE syllabus.  Classes always used the mannequin known to all as 'Resusci Annie'. The particular model used by Will's students was legless in order to store it in a carrying case. Youngsters used to practise on Annie in groups in preparation for their examinations.  Philip, following Will's teaching knelt beside Resusci Anne and shook her asking, 'Are you alright?' . He then put his ear over the mouth to see if the dummy was breathing, all correct procedure. Philip then turned to Will and said with a straight face, 'Sir, she says she can't feel her legs.'

Funny Jokes - On Your Travels

Out of the hat. Ron was walking down the street when he met a small boy. Ron asked his name. The lad replied, 'Six and seven-eighths.' Ron looked puzzled and asked him why his parents had given him such a strange name, and the youngster replied, 'Oh, they just picked it out of a hat.' Whose side are you on?  A British Army Colonel was walking down Oxford Street in London, when he saw a man with no arms and no legs sitting on the pavement playing a mouth organ. A sign beside the chap read, 'Victim of the Falklands War.' 'I say how disgraceful, eh?' said the colonel, 'the way the country treats its veterans.' So saying, he pulled out his wallet and peeled off two fifty pound notes and dropped them in the ex-soldier's hat. The veteran looked up and said, 'Muchas gracias, senor.'

A man in a hot air balloon realised he was lost. He reduced altitude and spotted a woman tending to the flowers in her garden. He descended a bit more and shouted, 'Excuse me, can you help me? I promised a friend that I would meet him an hour ago, but I don't know where I am.' The woman below replied, 'You're in a hot air balloon hovering approximately 30 feet above the ground. You're between 40 and 41 degrees north latitude and between 59 and 60 degrees west longitude.' 'You must be an Accountant,' said the balloonist. 'I am,' replied the woman, 'How did you know?' 'Well,' answered the balloonist, 'everything you told me is technically correct, but I have no idea what to make of your information, and the fact is, I'm still lost. Frankly, you've not been much help at all. If anything, you have delayed my journey.' The woman below responded, 'You must be in Management.' 'I am,' replied the balloonist, 'but how did you know?' 'Well,' said the woman, 'you don't know where you are, or where you're going. You have risen to where you are due to a large quantity of hot air. You made a promise of which you have no idea how to keep, and you expect people beneath you to solve your problems. The fact is you are in exactly the same position you were in before we met, but somehow it's now become my fault!'

a) In Italy, a campaign for Schweppes Tonic Water translated the name into Schweppes Toilet Water. b) In Chinese, the Kentucky Fried Chicken slogan 'finger-lickin' good' came out as 'eat your fingers off.'

c) An American T-shirt maker in Miami printed shirts for the Spanish market which promoted the Pope's visit. Instead of the desired 'I Saw the Pope' in Spanish, the shirts proclaimed 'I Saw the Potato.' d) Ford had a problem naming a car in Brazil when the Pinto flopped. The company found out that Pinto was Brazilian slang for 'tiny male genitals'. Ford pried all the nameplates off and substituted Corcel, which means horse. e) When Parker Pen marketed a ballpoint pen in Mexico, its ads were supposed to say, 'It won't leak in your pocket and embarrass you.'  However, the company mistakenly thought the Spanish word 'embarazar' meant embarrass. Instead the ads said, 'It wont leak in your pocket and make you pregnant.' f) The name Coca-Cola in China was first rendered as Ke-kou-ke-la. Unfortunately, the Coke company did not discover until after thousands of signs had been printed that the phrase means, 'bite the wax tadpole' or 'female horse stuffed with wax' depending on the dialect. Coke then researched 40,000 Chinese characters and found a close phonetic equivalent, 'ko-kou-ko-le,' which can be loosely translated as 'happiness in the mouth.' g) To even it up Will and Guy found this one from Coca Colas rival. In Taiwan, the translation of the Pepsi slogan 'Come alive with the Pepsi Generation' came out as 'Pepsi will bring your ancestors back from the dead.'

Paul, a senior official in his company, walked into a London bank and asked to see the loan's manager. He said he was going to America on business for two weeks and needed to borrow £10,000 [$19,000USD]. The loan manager said that the bank would need some collateral for such a loan. Paul immediately handed over the keys of a Mercedes that was parked on the street in front of the bank. Everything checked out and the loan officer accepted the car as security for the loan. An employee then drove the Mercedes into the bank's underground garage and parked it there. Two weeks later the Paul returned, repaid the £10,000 and the interest, which amounted to some £9.41 [$18USD]. The loan officer said, 'We do appreciate your business and this transaction has worked out very nicely, but we are a bit puzzled. While you were away we checked and found that you are a multimillionaire. What puzzles us is why you would bother to borrow £10,000?' With a broad grin Paul responded, 'Where else in London can I park my car for two weeks for less than £10?' P.S. Please write to Will and Guy if you have a really funny joke.