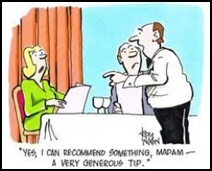 Will and Guy have an assortment of foody jokes and one-liners.

Do You Fancy Leak Soup?

Checking the menu, Nigel, a restaurant customer, ordered a bowl of soup.
After a couple of spoonfuls, he saw a circle of wetness right under the bowl
on the tablecloth.  He called over to the waitress and said, 'It's all
wet down here. The bowl must be cracked.'

The waitress said, 'You ordered the vegetable soup, didn't you?'

'Well, maybe it has a leek in it!', suggested the waitress. 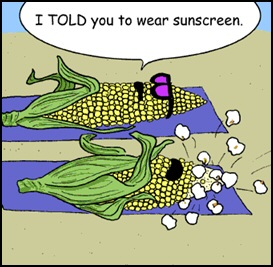 Rhoda and Harry go for a meal at a Chinese restaurant and order the 'Chicken Surprise.' The waiter brings the meal, served in a lidded
cast iron pot. Just as Rhoda is about to serve herself, the lid of the pot rises slightly and she briefly sees two beady little eyes looking around before the lid slams back down.

'Good grief, did you see
that?' she asks her husband, Harry. He hasn't, so she asks him to look in the pot. Harry reaches for it and again the lid rises, and he sees two little eyes looking around before it slams down. Rather
perturbed, he calls the waiter over, explains what is happening, and demands an explanation.

'Ah! So sorry, is
mistake' says the waiter, 'I bring you Peeking Duck!'

Kindly sent in by Alan Turnham.

This cake was commissioned for Suzanne.  The colleage who ordered the cake told
the baker to write: "Best
Wishes Suzanne" and underneath that, write "We will Miss you". They
couldn't even spell 'underneath' correctly!

Here is one of the strangest recipes that we
have ever seen.  It was first published in Countryman's Cooking, by W.M.W Fowler circa 1965

.Having shot your cormorant, hold it well away from you as you carry it home; these birds are exceedingly verminous and the lice are said to be not entirely host-specific. Hang up by the feet with a piece of
wire, soak in petrol and set on fire. This treatment both removes most of the feathers and kills the lice.
See the full
cormorant recipe here.