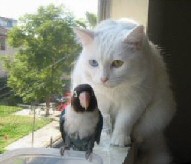 Will and Guy's quotes about cats researched from comedians, literature and films.

I got rid of my husband. The cat was allergic. 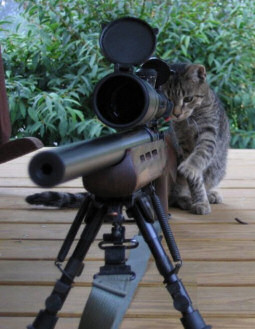 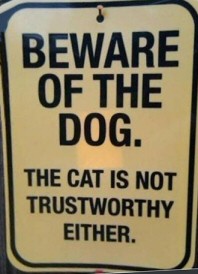 Whose Side Are You On?
If you're much like a cat, there's something to learn from the dogs:
loyalty, courage, and an unconditionally loving and positive attitude, for
example.

If you're much like a dog, there's something to learn from the cats:
independence, dignity, mutual respect and being yourself, for instance.

Cat Says No No No 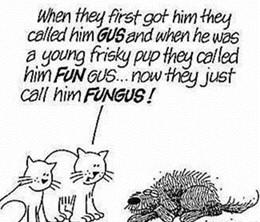 The Naming of Cats is a difficult matter.  T.S. Elliot, "The
Naming of Cats"  Old Possum's Book of Practical Cats.

Another Batch of Popular Cat Names

The Naming of Cats

The Naming of Cats is a difficult matter,
It isn't just one of your
holiday games;
You may think at first I'm as mad as a hatter
When I
tell you, a cat must have three different names
First of all, there's the
name that the family use daily,
Such as Peter, Augustus, Alonzo or James,
Such as Victor or Jonathan, or George or Bill Bailey -
All of them
sensible everyday names.

There are fancier names if you think they sound
sweeter,
Some for the gentlemen, some for the dames:
Such as Plato,
Admetus, Electra, Demeter -
But all of them sensible everyday names. 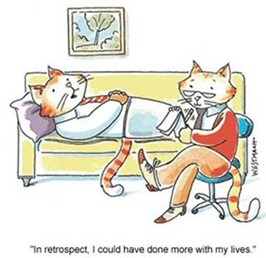 But I tell you, a cat needs a name that's particular,
A name that's
peculiar, and more dignified,
Else how can he keep up his tail
perpendicular,
Or spread out his whiskers, or cherish his pride?
Of
names of this kind, I can give you a quorum,
Such as Munkustrap, Quaxo,
or Coricopat,
Such as Bombalurina, or else Jellylorum -
Names that
never belong to more than one cat.
But above and beyond there's still one
name left over,
And that is the name that you never will guess;
The
name that no human research can discover -
But the cat himself knows, and
will never confess.

Footnote:
Please write to Will and Guy if you have any funny cat
sayings.  For example, Simon Mazik sent this:

A Cat in an Empty Apartment by Wislawa Szymborska

Die? One does not do that to a cat.
Because what's a cat to do
in
an empty apartment?
Climb the walls.
Caress against the furniture.
It seems that nothing has changed here,
but yet things are different.
Nothing appears to have been relocated,
yet everything has been shuffled
about.
The lamp no longer burns in the evenings.

Footsteps can be heard on the stairway,
but they're not the ones.
The hand which puts the fish on the platter
is not the same one which
used to do it.

Something here does not begin
at its usual time.
Something does not
happen quite
as it should
Here someone was and was,
then suddenly
disappeared
and now is stubbornly absent.

All the closets were peered into.
The shelves were walked through.
The rug was lifted and examined.
Even the rule about not scattering
papers was violated.

What more is to be done?
Sleep and wait.

Let him return,
at least make a token appearance.
Then he'll learn
that one shouldn't treat a cat like this.
He will be approached
as
though unwillingly,
slowly,
on very offended paws.
With no
spontaneous leaps or squeals at first.