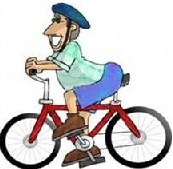 Here is Will and Guy's selection of funny cycle jokes and amusing
stories.

A tired cyclist stuck his thumb out for a lift. After 3 hours he hadn't got anyone to stop. Eventually, a guy in a sports car pulled over and
offered him a lift but, of course, the bike wouldn't fit in the car. The driver got some rope out of his boot [trunk] and tied it to his bumper. He tied the other end to the bike and told the rider, 'If I go
too fast, ring your bell and I'll slow down.'

Everything went well until another sports car overtook them. The driver forgot all about the cyclist and put his foot down. A short distance down the road, they
hammered through a speed trap. The cop with the radar gun radioed ahead to his colleague that 2 sports cars were heading his way at over 150 mph. He then added, 'And you're not going to believe this - there's a
cyclist behind them ringing his bell to pass.'

'I don't remember you ever beating Lance Armstrong' commented Brian, the journalist. 'When was that?'

'In the seventh stage of the Tour de France in 2002, I beat him over the head with my water bottle -
but he still won the tour!' 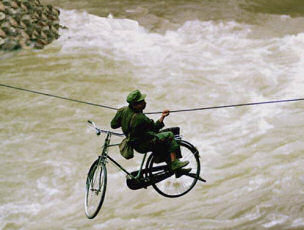 A man on a bike, carrying two
saddlebags, was stopped by a guard while crossing the US-Mexican border.  He had rigged up a primitive rope bridge to by-pass the customs control.

'What's in the bags? demanded the guard.
'Sand,' the cyclist answered.
'Take them off. I need to take a look.'
retorted the guard.

The guard emptied the bags and found out they contained nothing but sand. The man reloaded
his bags and continued across the border. A week later, the same man was crossing again with two more bags. The guard demanded to see them, and again they contained nothing but sand. This continued every week
for six months, until one day the cyclist failed to appear. A few days later, that same guard ran into the cyclist in Tijuana.

'Hey, where have you been?' the guard enquired. 'You sure had us wondering. We
knew you were smuggling something across the border. So tell me and I won't say a word. What was it?'

The man smiled broadly and told him the truth, 'Bicycles!'

Football
in Holland: How Supporters Travel to Games

Away Team Supporters On
Their Bikes 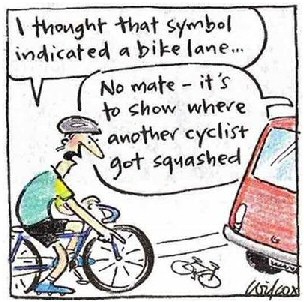 Firstly, Mr Evans, from Boulder, Colorado, USA, was knocked down by a car
in a hit-and-run incident and was taken to hospital for his injuries, but
was released later that night only slightly hurt.  Then, as he was
making his way back into town with his bicycle he was hit by a railway train
while crossing a bridge.  Luckily he was found alive, in a creek, and taken
to hospital for a second time; once more his injuries were found not to be
life-threatening.

James steps off the curb and into the road without looking and promptly gets
knocked down by a passing cyclist.
'You were really lucky there,' says Dave the cyclist.

'What on earth are you talking about. That really hurt!' exclaims James,
angrily rubbing his head.
'Well, usually I drive a bus!', retorts Dave with a grin. 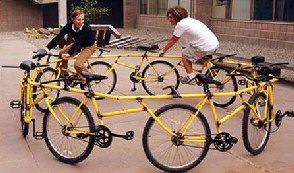 Did you hear about the vampire bicycle that went round biting people's
arms off?

It was a vicious cycle.

What a Way to Spend Your Birthday

A 48-year-old man from San Diego,
California broke the previous world record for stationary cycling by more than 11 hours.  Pete Maisel completed a session that lasted 96 hours, 4 minutes and 8 seconds.  In fact, he spent his 48th birthday with his girlfriend, Wendy Gardiner, but in a different way than previous years.  His goal for the
non-stop peddling was to raise money
for charitable causes and an upcoming bike trek.

What a Way to Spend the Night! 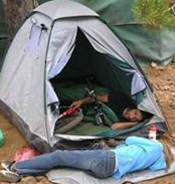 What
a Way to Spend the Day!

Alan is in court and standing in front of the magistrates after
trying argue his way out of his speeding ticket.  The magistrates find him guilty, fine him £80 ($150USD) and give him a receipt.

Alan, a bit upset by losing the case, sarcastically asks, 'What am I
supposed to do with this, frame it?'

'No,'
replies the head magistrate, 'You keep it. Two more and you can get a bicycle.'

Trouble and Strife on Tandem

A man who was riding a tandem was stopped by a police. 'What's the matter officer?', asked the
rider.

'Perhaps you didn't notice sir, but your wife fell off your tandem a mile
back . . .'