Allan, a mechanic, was removing a cylinder head from a Harley-Davidson motorbike, when he spotted a world-famous heart surgeon in his garage. The heart surgeon was waiting for the service manager to come and take a look at his bike. Allan shouted across the garage, 'Hey Doc can I ask you a question?' The famous surgeon, a bit surprised, walked over to Allan. Allan straightened up, wiped his hands on a rag and asked, 'So Doc, look at this engine. I also can open hearts, take valves out, fix 'em, put in new parts and when I finish this will work just like a new one. So how come I work for a pittance and you get the really big money, when you and I are doing basically the same work?' The surgeon paused, smiled and leaned over and whispered in Allan's ear, 'Try doing it with the engine running.'

It is amazing what the medical profession will write. These are actual statements taken from medical interview records written by various paramedics, emergency room receptionists, and (we are afraid) a doctor or two at major hospitals.

What Sort of Medicine is Practiced here? 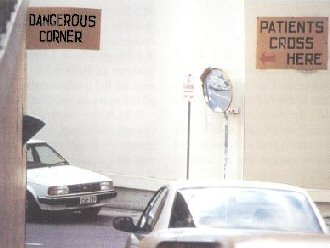 Keep Taking the Medicine Patient: It's been one month since my last visit and I still feel miserable. Doctor: Did you follow the instructions on the medicine I gave you? Patient: I sure did - the bottle said 'keep tightly closed.' What Vision Amy to X-ray technician after swallowing some money: 'Do you see any change in me?' Quick Diagnosis Nurse: 'Doctor, Doctor the man you've just treated collapsed on the front step. What should I do?' Doctor: 'Turn him around so it looks like he was just arriving!' Eating Disorder A mother complained to her doctor about her daughter's strange eating habits. 'All day long she lies in bed and eats yeast and car wax. What will happen to her?' 'Eventually,' said the Doctor, 'she will rise and shine.'

Kerry is medical student. When she was studying the toxicology module she attended the 'poison control centre' in the city. Kerry told a tale that a woman had 'phoned who was very upset because she had caught her little daughter eating ants. Kerry quickly reassured her that the ants were not harmful and there would be no need to take her daughter to Southampton General hospital. She calmed the caller down. At the end of the conversation the woman happened to mention that she had given her daughter some ant poison to eat in order to kill the ants. Kerry told her that she better take her daughter to accident and emergency straightaway!

One morning, Arnie went to see his doctor and told him that he hadn't been feeling at all well. The doctor examined Arnie, left the room, and came back with three different bottles of pills. Looking at Arnie he says, 'Take the green pill with a big glass of water when you wake up. Take the blue pill with a big glass of water after you eat lunch. Then just before going to bed, take the red pill with another big glass of water.' Startled to be put on so much medicine, the man stammered, 'L...........L.......L.........Lummee, Doc, exactly what is my problem?' The doctor replied, 'Arnie, you're not drinking enough water.'

Earlier this year Winston lost his ear. Luck would have it that it was replaced, with a pigs ear, by doctors. They cut it to size and made it look more human before sewing it, invisibly, in place. Several weeks passed before Winston felt it necessary to return to his surgeons. When he did, Winston complained bitterly, 'Doctor, I keep hearing this noise and its doing my head in.' The doctor, totally unconcerned answered, 'Don't worry, its just a bit of crackling.'

1. Damn! Page 47 of the manual is missing! 2. Better save that. We'll need it for the autopsy. 3. Wait a minute, if this is his spleen, then what's that? 4. Oh no! I just lost my Rolex. 5. ...and could you stop that thing from beating; it's throwing my concentration off 6. Anyone see where I left that scalpel? 7. Orthodox medicine has not found an answer to your complaint. However, luckily for you, I happen to be a quack. 8. FIRE! FIRE! Everyone get out! P.S. Please write to Will and Guy if you have any funny doctor jokes
• Home - Clean jokes