What a brilliant Christmas cartoon, I just cannot get this picture of
Rudolph having his nose buffed out of my mind.

After complaints from shoppers, a plastic reindeer in a South African shopping mall's
lost the shiny golden Christmas tree baubles hanging between its hind legs.
(From the Daily Telegraph)

The course of true love never did run smooth.

Here Is the Side Effect of Rudolph's
Love Affair 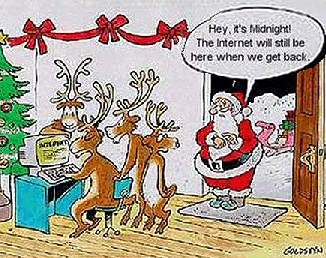 Out of the Mouths...
Amusing Christmas Story

Daniel was so excited he just had to tell his parents, 'I learned in Sunday School today all about the very first Christmas. There wasn't
a Santa Claus way back then, so these three blokes
on camels had to deliver all the toys.  And Rudolph the Red-nosed Reindeer with his nose so bright wasn't
there yet, so they had to have this big light in the sky to find their way
around'.

Will
and Guy Find the REAL Rudolph The Red Nosed Reindeer

Rudolph, the red-nosed reindeer
had a very shiny nose.
And if you
ever saw him,
you would even say it glows.

All of the other reindeer
used to laugh and call him names.
They
never let poor Rudolph
join in any reindeer games.

Then one foggy Christmas Eve
Santa came to say:
'Rudolph with
your nose so bright,
won't you guide my sleigh tonight?'

Then all the reindeer loved him
as they shouted out with glee,
Rudolph the red-nosed reindeer,
you'll go down in history!

Robert May wrote the lyrics to 'Rudolph the Red Nosed Reindeer' in the
late 1940s.  His mission was to produce a ditty that would appeal
particularly to children.  The idea was for Father Christmas to give
away a poem as children left the Department Store's Christmas Grotto.
'Rudolph the Red Nosed Reindeer' was a great success in 1948, and just about
every year since.  In 1949 Gene Autry, the singing cowboy, recorded the
first version of the song.

The Names of the Other Christmas Reindeer

In addition to Rudolph, Santa has eight more reindeer who haul the sleigh
the other reindeer are called: Dasher, Dancer, Prancer, Vixen, Comet, Cupid,
Donner and Blitzen.
See more on the
names of Santa's reindee

He says to the vet, 'Doctor, please do something for my Rudolph. His nose won't light up.

Message from Rudolph the Red-Nosed Reindeer

As we all know, it is very important for Santa and his reindeer to be silent when they deliver presents on Christmas Eve so
that no one will know they are there.

He went to work lifting the sack of toys out of the sleigh when he heard it again, only a lot louder this time. 'SNORT SNIFF HONK HONK SNORT!'

Lights came on all over the neighbourhood and some
people even stuck their heads out of their windows. Santa was horrified. Jumping back into the sleigh, he drove quickly back to his home at the North Pole. He lined up all the reindeer and informed them, 'We
are not going to deliver another present until the reindeer who is making funny noises with his nose steps forward and apologises!'  None of the reindeer stepped forward.

Santa held up a piece of paper.
'I know who it is and I have written your name on this paper. But I want to give you a chance to do the right thing on your own.'

Still none of the reindeer came forward. So Santa did the only thing he
could do.