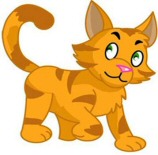 We have lots of tales about moggies; some are true stories, while others have been written specially for kids.

The Monkey, The Cats and The Cheese

Once upon a time two cats found a piece of cheese and cut it into two pieces. Now, one piece was slightly bigger than the other. Naturally, both the cats wanted the bigger piece.

So they decided to approach a monkey and ask him to sort out the matter.

Seeing this, the cats pleaded, 'Sir. We are satisfied. Let us have the pieces now.'

The shrewd monkey replied, 'This is my fee for sorting out the problem.'

Saying this, it gobbled up all the remaining cheese.

A Cat's Story of Captivity

My captors continued to taunt me with bizarre little dangling objects.  They dine lavishly on fresh meat, while I am forced to eat dry cereal.  The only thing that keeps me going is the hope of escape, and the mild satisfaction I get from clawing the furniture. Tomorrow I may eat another house plant.

Today my attempt to kill my captors by weaving around their feet while they were walking almost succeeded.  Maybe I should try this at the top of the stairs.

In an attempt to disgust and repulse these vile oppressors, I once again induced myself to vomit on their favorite chair.  I must try this on their bed.

Decapitated a mouse and brought them the headless body in an attempt to make them aware of what I am capable of, and to try to strike fear into their hearts.  They only cooed and condescended about what a good little kitty cat I was.  This is not working according to plan.

There was some sort of gathering of their accomplices.  I was placed in solitary confinement throughout the event.  However, I could hear the noise and smell the food. More important, I overheard that my confinement was due to my powers of inducing something called '
allergies.'  Must learn what this is and how to use it to my advantage.

I am convinced the other captives are flunkies and maybe snitches.  The dog is routinely released and seems more than happy to return.  He is obviously a half-wit.

The bird, on the other hand, has got to be an informant. He speaks with them regularly, and I am certain he reports my every move.  Due to his current placement in the metal room, his safety is assured. But I can wait....

It's only a matter of time.

What do you make of this picture?  What's the cat looking at?  How did he get there?  What's the story behind this picture.  It would
make a wonderful challenge to ask a class of school children to let their imagination run wild and write a story to explain the picture.

Lest you think that cruelty was involved in taking this picture, this is the background to the image.

This bobcat leapt 50 feet up a prickly cactus and stayed there for six hours to escape from a mountain lion in the Sonoran Desert, Gold Canyon, Arizona, USA. The terrified feline climbed to the top of the Giant Saguaro Cactus and was so scared it stayed there for several hours. 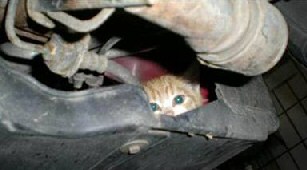 A ginger kitten used up one of his nine lives when he survived a 70mph trip; hidden away inside the chassis of a car.  The driver stopped his
car when he heard loud miaowing coming from the rear of his motor as he drove to work in Sankt Poelten, Austria.

Mechanics spent three hours dismantling the car until they found Gussie, who belongs to a neighbour, huddling inside the chassis.  He was hungry and a bit dirty and frightened but he seemed very relieved to be free. 'He wouldn't stop purring,' mechanic Leopold Wohlmertsberger informed us.

(Judging by the picture, Gussie does not look too exhausted say Will and Guy)

A mother cat was teaching her kitten cat lore. She explained that this was the duty of all mother cats since before recorded history and it was important that her kitten would not do anything to embarrass her when she allowed her master to play with her.

At the end of the lesson, after she had gone over all the cat rules such as ignoring anything the human might say, she asked her kitten if there was question she might want to ask.

The kitten said, 'Mum, you have given me all the situations a cat might get into and the proper cat-responses but, what should I do if a new
situation comes up that you haven't covered?'

Mother cat responded, 'Oh my word! I'm SO glad you asked that. I've gotten into so many rules that I forgot the most important first rule.'

The kitten asked, 'What is that, Mum?'

Mum smiled and looked kitten right in the eye and said, 'When in doubt…….wash.'

A frightened feline that was lodged in a tall tree for a week, was finally hosed to safety with a high-pressure fire hose.  Locals held an outstretched sheet and made the catch as the cat, soaked and hungry but unharmed, was hosed out of the tree by fire fighters last week in Yonkers, New York, USA.

'Everyone was cheering,' said artist and animal rescuer Greg Speirs, who was among about 50 people assembled beneath the willow tree.  The cat had previously ignored people who banged cans of cat food and climbed ladders that proved to be just out of reach.  It took two shots with the hose to do the trick.  'As soon as the cat landed it jumped out and ran into the woods,' Speirs reported to the New York Daily News.  'Some kids helped us bring the cat back, and a man said he would adopt the cat right on the spot,' Speirs added.  'You can't come up with a nicer ending than that.

Footnote:  Please send us your cat stories for children.