Skip to content
We have jokes from both sides of the school desk.  Jokes poking fun at teachers, and teacher jokes, where they have a laugh at the pupils.

Normally 'teachers jokes' mean fun at a teacher's expense, whereas these excuse notes are teacher's revenge, having a laugh at pupil's excuses, some were even written by the children themselves. These are excuse notes from parents (with their original spelling), collected by schools from all over the country.

We have to assume that these school excuse notes were written by the parents.  Because when I was teaching, such notes would often be a give-away that they had been written by the pupils.

I have never let my schooling interfere with my education. Mark Twain You Have to Be a Schoolteacher If ....

You have no time for a life from the end of August until Mid-July. You want to slap the next person who says, 'Must be nice to work from 8.30am to 3.15pm and have your summers and weekends free.' When you're out in public you feel the urge to talk to strange children and correct their behaviour. You refer to adults as, 'boys and girls.' You encourage your spouse by telling them they are a 'good helper.' Meeting a child's parents instantly answers the question, 'Why is this child like he is?' you believe 'extremely annoying' should have its own box on the report. You know hundreds of 'good' reasons for being late. You don't want children of your own because there isn't a name you can hear that wouldn't raise your blood pressure.  See a good collection of funny cartoons here.

The teacher asked her class of 8 year olds to use a sentence containing the word fascinate Molly put up her hand and said, 'My family went to my granddad's farm, and we all saw his pet sheep It was fascinating.' The teacher said, 'That was good, but I wanted you to use the word 'fascinate', not fascinating'. Sally raised her hand. She said, 'My family went to see Rock City and was fascinated.' The teacher said, 'Well, that was good Sally, but I wanted you to use the word 'fascinate.' Little Johnny raised his hand. The teacher hesitated because she had been burned by Little Johnny before. She finally decided there was no way he could damage the word 'fascinate', so she called on him. Johnny said, 'My aunt Gina has a sweater with ten buttons, but her bosoms are so big she can only fasten eight.'
Schoolboy Howler The closest town to France is Dover, you can go by train or take a fairy.  (David aged 11) 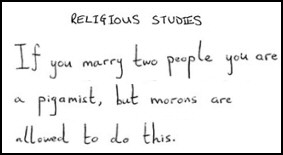 The teacher sat down and cried. A nursery school teacher was observing her classroom of children while they were drawing Christmas scenes. She would occasionally walk around to see each child's work. As she got to little Sarah who was working diligently, she asked what the drawing was. Sarah replied, 'I'm drawing God.' The teacher paused and said, 'But no one knows what God looks like.' Sarah replied, 'They will in a minute' See more Christmas Jokes here

5) More Humor from the Classroom

Humour is not always contrived. Will and Guy were teachers in their 'previous lives' and can vouch for the fact that children often create funny moments without meaning to cause laughter. Here are some examples which we have come across. Moira was struggling to get the tomato ketchup out of the bottle. As she was trying the phone rang and her 4 year old daughter, Louise, answered it saying, 'Sorry, mummy can't come to the phone at the moment because she's hitting the bottle.' Roger, the local police/school liaison officer was in Green Barn Primary School, Sherborne, Dorset, UK, on an official visit when Mary, age 6, approached him. 'Are you a policeman?' Mary asked. 'Yes,' answered Roger smiling. 'My mum said if I was ever in trouble then I ought to ask a policeman for help. Is that true?' 'Of course,' uttered Roger. 'Then will you please tie my shoelace?' said Mary. Jenny was watching her daddy getting dressed in his dinner jacket [tuxedo] before the party. 'You shouldn't wear that, daddy,' she murmured. 'Why, darling?' inquired her father of Jenny. 'Well you know it always gives you a headache in the morning, said Jenny.' Chris was driving his 4 year old, Betsy, to the beach one summer when a woman in a cabriolet in front stood up and waved. She was absolutely naked and as Chris was recovering from the shock he heard Betsy shout,' Look, daddy, that woman isn't wearing a seat belt.' Maggie, [Will's sister] was an infant school teacher, and on her first day with the reception class [1st graders] at Northern Primary, Portchester, a little girl gave her a note which said: 'The opinions expressed by this child are not necessarily those of her parents.' Steve, age 6 years, became lost in the sports complex known as HMS Temeraire, the Royal Navy Physical Training centre in Portsmouth, UK. Seeing a ladies locker room [changing facility] in front of him he darted in to ask for help. When he was spotted the room burst into shrieks, with ladies grabbing towels and running for cover. Steve watched in amazement and then asked, 'What's the matter, haven't you ever seen a little boy before?' Jack, the Westbourne village police officer, parked his van outside the police station in Havant and was about to collect his police dog, a German shepherd, from the back. The dog was barking rather loudly and a little boy who was watching enquired, 'Is that a dog you've got there?' 'Yes,' smiled Jack. The little boy looked extremely puzzled and eventually asked, 'What did he do?' Paul, while working for 'meals-on-wheels', an organisation that delivers lunches to the elderly, Paul used to take his 4-year-old daughter, Lois, with him on his afternoon rounds. Lois was unfailingly intrigued by the various appliances of old age, particularly the walking sticks, triangular walkers and the wheelchairs.  One day Paul found Lois staring at a pair of false teeth soaking in a glass. As he prepared himself for the inevitable barrage of questions, Lois merely turned and whispered, 'The tooth fairy is never going to believe this.' Nathan, after his first day at school, returned home and told his mother, 'I'm wasting my time at school. I can't read, I can't write, and they won't let me talk.' Father John, while walking along the pavement in front of his church, heard the intoning of a prayer that nearly made his collar wilt. Apparently, his 5-year-old son, Rory, and his playmates had found a dead robin. Feeling that proper burial should be performed, they had secured a small box and some cotton wool, then dug a hole and made ready for the disposal of the deceased. Rory, the minister's son was chosen to say the appropriate prayers and with sonorous dignity intoned his version of what he thought his father always said, 'Glory be unto the Faaather, and unto the Sonnn, and into the hole he goooes.'

On a Music Teacher's door in Halifax, Nova Scotia, Canada: Out Chopin, back in a min-u-et. Experience is a hard teacher. She gives the test first and the lessons afterwards. Q: Name the four seasons. A: Salt, pepper, mustard and vinegar. Problem Pupil? or Problem Teacher? An educational psychologist is asked to see a pupil who draws all his pictures only with black and brown crayons. He talks to him. Nothing obvious. He gives him projective tests. Nothing shows up. Finally, in desperation, he gives him some paper and a box of crayons. 'Oh goody, 'says the boy, 'I get an old box of crayons in school and only the black and brown were left.'

It is often hard to determine the meaning of what a teacher says, so to help you along, here is a handy guide of:  What a Teachers Says and What He Really Means for Year 10 Students: Footnote: Please write to Will and Guy if you have any funny teachers' jokes