For Will and Guy, Saturday morning still has an air of expectation - it's sports day, let's quickly finish the chores and then settle down for our favourite sport. 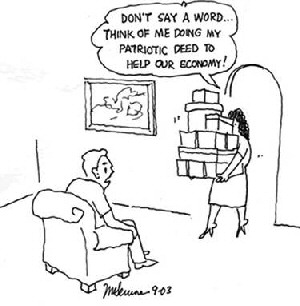 Mary was taken before the judge accused of theft, and he asked her, 'What did you steal?' 'A small can of peaches,' Mary replied, weeping. The judge then asked her why she had stolen the peaches, and she replied that she was hungry. The judge then inquired, 'And how many peaches were in the can?' Mary answered, 'Only 6 small pieces.' The judge harshly announced, 'Then I will give you 6 days in jail.' But before the judge could finish pronouncing the punishment, the woman's husband, Derek, interrupted and asked the judge if he could say something? The judge, slightly annoyed asked, 'And what have you to say in your wife's defence?' Derek spoke clearly, 'She also stole a large can of peas.' 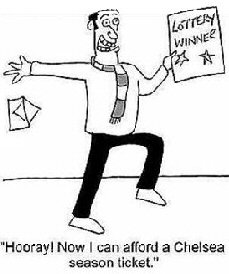 Iris was reading her Saturday newspaper, while her husband, Ben, was engrossed the magazine. Suddenly, Iris burst out laughing. 'Listen to this, Ben,' she said, 'There's a classified ad here where a guy is offering to swap his wife for a season ticket to *Stamford Bridge.' 'Hmmm,' Ben said, not looking up from his magazine. Teasing him, Iris asked, 'Would you swap me for a season ticket?' 'Absolutely not,' Ben replied. 'How sweet, 'Iris continued, 'Tell me why not.?' 'Season's more than half over,' Ben trumpeted. *Stamford Bridge is the stadium where Chelsea Football Club plays. 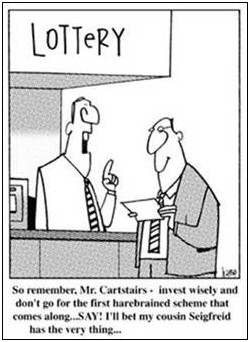 One Saturday evening Lorraine came home, screeching her car into the driveway, she ran into the house, slammed the door and shouted at the top of her lungs, 'Honey, pack your bags. I won the lottery.' Tony, her husband called out, 'Oh my God. What should I pack, beach stuff or mountain stuff?' 'Doesn't matter,' Lorraine continued, 'Just get out.'

In the frozen foods department of Wal-Mart last Saturday morning, I noticed a man shopping with his son. As I walked by, he checked something off his list, and I heard him whisper conspiratorially to the child, 'You know, Harry, if we really mess this up, we'll never have to do it again.'
Saturday's child works hard for a living.

One Saturday morning in Whyte's Auction House the bidding was proceeding furiously and strongly when the Chief Auctioneer suddenly announced, 'A gentleman in this room has lost a wallet containing ten thousand dollars. If returned, he will pay a reward of two thousand dollars. There was a moment's silence in the auction house and from the back of the room came a cry, 'Two thousand five hundred.'

Examples of our Jokes and One-liners for Saturday

'The man who invented the zip fastener was today honoured with a lifetime peerage. He will now be known as the Lord of the Flies.' 'The prime minister held a meeting with the cabinet today. He also spoke to the bookcase and argued with the chest of drawers.'

Ultimate My Dad is Better than Your Dad

This was a part of the sermon at the John Pounds Unitarian Church, Old Portsmouth: retold by Bill Ryan. Three boys were talking together about what their father's did for a living. Boy 1 Began by saying that his Dad wrote a few words on a piece of paper, sent them away and received £20 for them and they called it a poem. Boy 2  Not to be outdone said that his Dad wrote a few pages of words, sent them away and received £100 and they called it a story. Boy 3  Was full of himself and said that his Dad wrote a couple of sides of words, read them out on Sunday morning, called it a sermon and it took 6 people to go round and collect all the money.

Bills travel through the mail at twice the speed of checks Never do card tricks for the group you play poker with.

Cocktail lounge, Norway: LADIES ARE REQUESTED NOT TO HAVE CHILDREN IN THE BAR. At a Budapest zoo: PLEASE DO NOT FEED THE ANIMALS. IF YOU HAVE ANY SUITABLE FOOD, GIVE IT TO THE GUARD ON DUTY.

Even when I have pains, I don't have to be one. To cheer yourself up, you should try cheering someone else up.

Unexpected Knowledge Gained From the Movies

All too rarely, airline attendants make an effort to make the in flight 'safety lecture' a bit more entertaining. Here are some real examples of funny airline cabin crew announcements:

One day, Dave, the bus driver, was in his bus when the biggest man he had ever seen got on. The giant looked at the driver and growled, 'Big Eric doesn't pay' , and took his seat. Dave was only a little man and he didn't really want to argue. This happened for several days. After a week, Dave was beginning to get a little angry. Everybody else paid, so why not the big man? So Dave went to the gym and started a course of body-building. He didn't want to be frightened of Big Eric any longer. Eight weeks later the driver had strong muscles and was feeling very fit. At the usual stop, Big Eric got on. 'Big Eric doesn't pay' , he barked; but this time Dave was prepared for him. He stood up, shaking slightly, and said between clenched teeth, 'Oh, yeah? And why doesn't Big Eric pay?' 'Because Big Eric has got a bus pass', the man replied. Footnote: Please send us your Saturday jokes