Donncha is shocked at finding out all his cows are suffering from "Bluetongue." 'Bejabbers,' Donncha murmurs, 'I didn't even know they had
mobile phones.'

Here are classic Irish jokes to share with friends especially on the 17th of March. 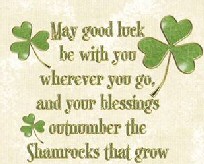 O'Driscoll was sinking in a bog, near Killarney in County Kerry, and seemed a goner when Big Dermot McCann wandered by...

'Don't worry,' assured Dermot. 'Next to the Strong Muldoon, Oi'm the strongest man in Erin, and Oi'll pull ye right out o' there.'

Dermot leaned out and grabbed O'Driscoll's hand and pulled and pulled to no avail. After two more unsuccessful attempts, Dermot said to O'Driscoll, 'Shure, an' Oi can't do it. The Strong Muldoon could do it alone, mebbe, but Oi'll have to get some help.'

As Dermot was leaving, O'Driscoll called 'Dermot, Dermot! D'ye think it will help if Oi pull me feet out of the stirrups?'

An Irishman, by the name of O'Malley proposed to his girl on St. Patrick's Day.  He gave her a ring with a synthetic diamond.  The excited young lass showed it to her father, a jeweller.  He took one look at it and saw it wasn't real.

The young lass on learning it wasn't real returned to her future husband. She protested vehemently about his cheapness.

'It was in honour of St. Patrick's Day, 'he smiled.

An Irish professor of Literature was at conference in Spain.  As a conversational ice breaker, his Spanish host asked if the Irish had a Gaelic word similar in meaning to the Spanish - mañana.  Sure said the professor, we have five words similar to mañana, but none of them have quite the same sense of urgency.

How to Gain Admittance to the Olympics

An Englishman, a Scotsman and an Irishman were without tickets for the opening ceremonies of the summer Olympics but hoped to be able to talk their way in at the gate.  Security was very tight, however, and each of their attempts was met with a stern refusal.

While wandering around outside the stadium, the Englishman came upon construction site, which gave him an idea. Grabbing a length of scaffolding, he presented himself at the gate and said, 'Johnson, the pole vault, 'and was admitted.

The Scotsman, overhearing this, went at once to search the site. When he came up with a sledge hammer, he presented himself at the gate and said, 'McTavish, the hammer.' He was also admitted.

The Irishman combed the site for an hour and was nearly ready to give up when he spotted his ticket in. Seizing a roll of barbed wire, he presented himself at the gate and announced, 'O' Sullivan, fencing.'

It's Saint Patrick's day and an armed hooded robber bursts into the Bank of Ireland and forces the tellers to load a sack full of cash. On
his way out the door with the loot one brave Irish customer grabs the hood and pulls it off revealing the robber's face.

The Robber Shoots the Guy Without Hesitation!

He then looks around the bank to see if anyone else has seen him. One of the tellers is looking straight at him and the robber walks over and calmly shoots him also.

Everyone by now is very scared and looking down at the floor.

Did anyone else see my face?' screams the robber.

There is a few moments of silence then one elderly Irish gent, looking down, tentatively raises his hand and says, 'I think me wife may
have caught a glimpse.'

'I had an accident opening a can of alphabeti spaghetti this morning,' said Murphy.

'Were you injured?' inquired Seamus. 'No, but it could have spelled disaster,' concluded Murphy.

It's All in The Glove

O'Malley was leaving his favourite bar when he was run over by a bus. He gets to the gates of heaven and St. Peter tells him he cannot enter unless he passes a test. What choice did he have, O'Malley agrees to try as he never was the brightest bulb in the box.

St. Peter decides to go easy on him, 'What has 5 fingers and is made of black leather?' he asks. O'Malley scratches his head, thinks hard and
finally gives up. 'It's a glove says St. Peter.'

Let's try again. 'What has 10 fingers and is made of black leather?' asks St. Peter. O'Malley is clearly stumped. After a few minutes of pacing in a circle and scratching his head, O'Malley gives up. 'Why it's 2 gloves - don't you see 10 fingers, black leather, says St. Peter amazed.' Being in a generous mood, St. Peter decides to give O'Malley yet another chance but thinking of an even easier question.

'Who is the patron Saint of Ireland?' asks St. Peter, thinking he can't miss this.
'It wouldn't be 3-gloves, would it?' says O'Malley.