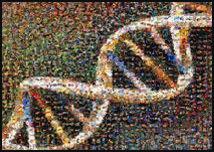 Chinese doctors have identified
the human gene which causes Pedaspheraphobia.

Dr Chang of the Beijing University of Chinese Medicine and Pharmacology, reports that symptoms of Pedaspheraphobia include vertigo and nausea when ever watching sport.  Apparently, football on television is
particularly likely to set off adverse reactions.  However, the doctor admitted that other sports could cause the same symptoms.

Physical symptoms are a rash
on the neck and torso, often triggered by match commentary.  In severe cases the patient suffers from palpitations.  There is also a tendency towards accompanying irrational behaviour such as turning off the television and hiding the remote control.

What interests the team at the University is that Pedaspheraphobia is caused by a single gene on the X chromosome.  Although the gene is comparatively rare, only affecting 7% of people, it is more
prevalent in women because they have two X chromosomes and therefore double the chance of inheriting the gene.

Dr Chang has identified the locus for Pedaspheraphobia at 100764.776 Xq22.1 (see red line on the
diagram of X Chromosome).  His own line of research is to discover whether women who have not one, but two Xchromosomes display heightened symptoms.

Chinese doctors say that the football World Cup offers a great opportunity to learn more about the physical symptoms of Pedaspheraphobia.  One group
with the affected gene, 36* women and 18 men, will be taken to a health centre in Hong Kong and shown no football.  Meanwhile, a control group will be sent to Yaiyuan where they will be forced to watch every
game of the world cup.

Each group will be monitored for two weeks.  For the second half of the World Cup the groups will be swapped and monitoring will continue.  Dr Chang explained this would
enable comparisons to be made between the groups and within the groups.  He was hopeful of obtaining some fresh data to help understand the phenomenon of Pedaspheraphobia.