Guy is so hideously ugly, that at Christmas, we hang him up and kiss the mistletoe instead.

The Custom of Kissing Under the Mistletoe

The custom of kissing under the mistletoe could possibly be related to a Scandinavian goddess.  Frigga, the goddess of love, marriage, and destiny in Norse mythology, is strongly associated with mistletoe, which has been used as a decoration in homes for thousands of years. According to Scandinavian legend, the god Balder the Beautiful was killed by a spear of mistletoe and his grieving mother Frigg, who banished the plant to the top of trees.  When Balder came back to life, Frigg made mistletoe a symbol of love. In Brittany, France, the plant is known as Herbe de la Croix because it is thought that Christ's cross was made of mistletoe wood. Mistletoe is associated with many pagan rituals. In fact, the Christian church disliked the plant so much, thanks to its pagan associations, that it forbade its use in any form.  Some English churches continued this ban as late as the 20th century. Druids believed mistletoe growing on oak trees was the most sacred form of the plant and that it offered protection from all evil, as well as being the source of much magic. The early Christian church banned this use of mistletoe because of its association with Druids. The mystery of the mistletoe's method of reproduction led many people to link the plant with spontaneous generation, fertility and aphrodisiacs. In medieval times, women wishing to conceive would wrap mistletoe around their waists and wrists to increase their fertility. Holly became a Christian substitute for mistletoe, which is why we 'deck the halls' with it. The sharply pointed leaves in holly were supposed to symbolise the thorns in Christ's crown and the red berries were to symbolise his blood.

Will was returning home from a business trip.  It had been an exhausting trip and he was not in a good mood.  The airport's Christmas musak was getting him down, and their decorations were tacky. As he queued at the check-in desk he day-dreamed about the plastic mistletoe hung over the luggage scale.  Being in a bad mood, he said to the woman at the counter, "You know, even if I weren't married, I wouldn't kiss you."  That's not what it's there for," said the attendant. "It's so you can kiss your luggage goodbye.

Will and Guy's Trivia About Kissing

Jennifer was a pretty 18 year old girl.  In the week before Christmas she sauntered up to the curtain counter, and was trying to decide which of the many types of tinsel she would buy.  Finally, she made her choice and asked the spotty youth who was manning the fabric section.  'How much is this gold tinsel garland'. The spotty youth pointed to the Christmas mistletoe above the counter and said, 'This week we have a special offer, just one kiss per metre'. 'Wow, that's great', said Jennifer, 'I'll take 12 metres'. With expectation and anticipation written all over his face, the boy measured out the tinsel, wrapped up the garland, and gave it to Jennifer. She then called to an old man who had been browsing through the Christmas trees and said, 'My Grandpa will settle the bill.'

Kissing under the Christmas Mistletoe

Mistletoe pops up in all sorts of places at Christmas.  Over doors is the most popular place, while some people carry at around with them or wear it on their headwear.   There are also myths associated with Christmas mistletoe, most notably that you should wait until twelfth night and then burn it.  If this isn't done then all the kisses will be wasted and no true romance will result. The French have a slightly different take on festive mistletoe, they wait until for 'Au gui l'An neuf' until the 1st of January. See more on kissing.

Kissing Under the Mistletoe at the Airport

Nigel's business trip had gone quite well, but he was ready to return home to the warmth of his family. Bristol airport, on the other hand, had turned a tacky red and green; the loudspeakers blared annoying renditions of once cherished Christmas carols and ancient pop songs. Nigel enjoyed Christmas and took it very seriously, and being slightly tired and irritable, he just wanted to get home. He approached the check in desk humming a carol quietly to himself in an attempt to keep his spirits up. He began to check in his one suitcase when he saw hanging mistletoe.  Not real mistletoe, but very cheap plastic with red paint on some of the rounder parts and green paint on some of the flatter and more pointed parts, that could be taken for mistletoe only in a very surreal type of way. With a considerable degree of irritation and nowhere else to vent it, he said to the girl at the desk, 'Even if we were married, I would not want to kiss you under such a ghastly mockery of mistletoe.' 'Sir,' replied the attendant politely, 'look more closely at where the mistletoe is.' 'Ok,' muttered Nigel, 'I see that it's above the luggage scale which is the place you'd have to step forward for a kiss.' 'That's not why it's there.' 'Ok, I give up. Why is it there?' snapped Nigel irritably. The attendant quipped: 'It's there so you can kiss your luggage good-bye.' 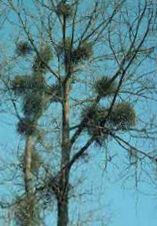 Viscum Alba is an unusual plant.  Although mistletoe a flowering plant (and not a fungus) it is also a parasite growing on trees. In Europe you can find mistletoe on apple, pine, fir, poplar and even oak trees at Christmas time.  When you see your very first mistletoe growing wild, you think, 'Hmm, something's the matter with that tree'.  Then you realize that the tree's 'growth' is mistletoe.  In the case of apple and oak trees, the mistletoe shows up clearly in December, this is because the trees have lost all their own leaves which otherwise hide the mistletoe.

America has its own mistletoe tree belonging to the genus Phoradendron.  As usual, the American varieties are more colorful and bigger than their European cousins!  As you can see from the distribution map below, the American mistletoe is more common in the South and the East. 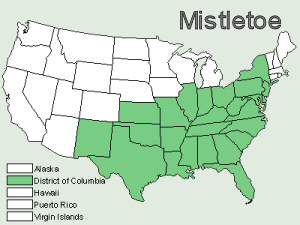 Why the Mistletoe Can be White, Yellow or Even Red 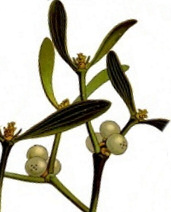 Plant parasites, or epiphytes, are fussy about their 'host' tree.  Over thousands of years this has resulted in sub-species of mistletoe each with slightly different coloured berries.  This is why instead of the traditional pearly white berries, you sometimes see the mistletoe with yellow fruit.  The American mistletoes show an even greater variation in colour, some species even have red berries. Many of those with orchards or woodlands don't welcome the mistletoe because it is an aggressive parasite which will eventually kill the tree.  However, other foresters see it as an opportunity to harvest the mistletoe and make extra income at Christmas time. Pure Botanists like the mistletoe; firstly because it's unusual to find a flowering plant that is a parasite; secondly, they like the side effect of greater diversity of birds feeding on the berries. Finally, a word of warning, stick to kissing under the mistletoe.  The berries don't taste very nice.  In fact, many species are poisonous.  If you do ignore this advice and eat mistletoe berries or leaves, vomiting is the least of your worries, you are likely to suffer from blurred vision and complications associated with low blood pressure.