Science often seems mysterious, and thus is a fruitful ground for
humour.  Guy is a qualified science teacher, and Will taught history
and social science. Thus we have an insight into this area of humour.

'Chemists are a strange class of mortals, impelled by an almost
maniacal
impulse to seek their pleasures amongst smoke and vapour, soot
and flames,
poisons and poverty, yet amongst all these evils I seem to
live so sweetly
that I would rather die than change places with the
King of Persia.'

While living on Earth might be expensive, at least we get a free trip
around the Sun every year.

Will and Guy think that Copernicus' parents said the following to him
at the age of twelve, 'Copernicus, young man, when are you going to come
to terms with the fact that the world does not revolve around you.'

The Sun is 4.5 billion years old and produces 383 billion trillion
kilowatts of energy.

The Moon is the only non-Earth object upon which a man has walked.

Depending upon how hot the white dwarf star is, its colour varies from
blue, white, yellow, or red.

According to scientists, in around 5 billion years, a day on Earth will
be 48 hours long and somewhere during that time the Sun will explode.

The lightning in the sky is nearly 3 times hotter than the Sun.

Dear Dad,
$chool i$ really great. I am making lot$ of friend$ and
$tudying very hard. With all my $tuff, I $imply can't think of anything
I need, $o if you would like, you can ju$t $end me a card, a$ I would love
to hear from you.
Love, Your $on.

Dear Son,
I kNOw that astroNOmy, ecoNOmics, and oceaNOgraphy
are
eNOugh to keep even an hoNOurs student busy. Do
NOt forget that the
pursuit of kNOwledge is a NOble
task, and you can never study eNOugh.
Love, Dad 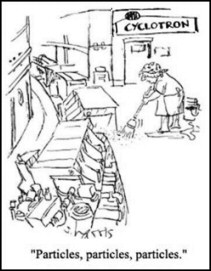 There was an old lady called Whyte
who could travel much faster than
light.
She departed one day
in a relative way
and returned on
the previous night.

Law of Cat Inertia: A cat at rest will tend to remain at rest, unless
acted upon by some outside force - such as the opening of cat food, or a
nearby scurrying mouse.

Law of Cat Motion: A cat will move in a straight line, unless there is
a really good reason to change direction.

Law of Cat Magnetism: All blue blazers and black sweaters attract cat
hair in direct proportion to the darkness of the fabric.

Law of Cat Thermodynamics: Heat flows from a warmer to a cooler body,
except in case of a cat, in which case all heat flows to the cat.

Law of Cat Stretching: A cat will stretch to a distance proportional to
the length of the nap just taken.

Law of Cat Sleeping: All cats must sleep with people whenever possible,
in a position as uncomfortable for the people involved, and as comfortable
for the cat, as possible.

Law of Cat Elongation: A cat can make her body long enough to reach any
counter top that has anything remotely interesting on it.

Law of Cat Obstruction: A cat must lie on the floor in a position to
obstruct the maximum amount of human foot traffic.

Law of Cat Acceleration: A cat will accelerate at a constant rate,
until he gets good and ready to stop.

You may be a chemist if
you can't stand the expression: 'A watched pot never boils'.

It should
be 'A watched pot and an unwatched pot boil at EXACTLY the same rate.'

I was looking for sodium on the periodic table, but then it
told me it was Na (Not Available!!)

Question: If you pour a handful of salt into a full glass of water does
the water level go down, or does the glass overflow?

If you start with pure water, and add a small amount of salt then the
level will go down slightly, there will be no overflow.  This is the
reason (true!)

There is space between water molecules. When you pour the salt slowly,
this fills up the space between the molecules. Salt (NaCl) readily
dissolves in water producing Na+ and Cl- ions. Na+ goes to the negative
end of H20 molecule and CL- goes to the positive end of H2O molecule.
In this way the force of attraction decreases the total volume of the
salt solution.  This effect only continues until no more salt can
dissolve in the water.

Working on your Ph.D.? You might see it as a monumental task, but don't
sweat it. Make the process easier by using these 10 trusty techniqes: 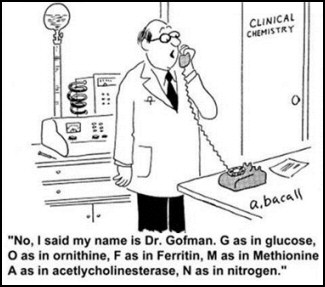 In 2013 there were two young men called Tony and Peter who were reading
Chemistry at Jesus College Oxford, England and who did pretty well on all
of the midterm exams.

These Tony and Peter were so confident that the weekend before finals
they decided to go up to London and party with some friends up there. So
they did this and had a great time.

However, with their hangovers and everything, they overslept all day
Sunday and didn't make it back until early Monday morning.

Rather than taking the final exam then, they found the professor and
explained to him why they missed the final. They told him that they went
up to London for the weekend, and had planned to come back in time to
study, but that they had a flat tyre on the way back, didn't have a spare
and couldn't get help for a long time. The professor thought this over and
then agreed that they could make up the final on the following day. The
Peter and Tony were elated and relieved.

So, they studied that night and went in the next day at the time that
the professor had told them. He placed them in separate rooms and handed
each of them a test booklet and told them to begin.

They looked at the first problem, which was something simple about
molarity and solutions and was worth 5 marks.
'Great, 'they thought,
'this is going to be easy.'

They completed that problem and then turned the page.

They were unprepared, however, for what they saw on the next page. It
said: For 95 marks: "Which tyre was flat?"

A scientist has come up with proof of something students have known for
years: chemistry lectures are boring. In an article published in the
current issue of Chemistry in Britain, a university chemistry lecturer
introduced a guest lecturer to a class of 50 doctoral candidates.

Then, he and his colleagues studied variations in what he calls the
HTFDR: "head-to-floor distance reduction."

After about an hour, the average HTFDR dropped from 135cm to 121cm,
said the author of the study, who preferred to remain anonymous.

The HTFDR immediately bounced back to normal when the speaker uttered
the magic words: 'And in conclusion . . .'

In a fifth-grade class, a teacher asked students various science
questions, of which the following were the funniest:

Teacher: What is the definition of a protein?'
Student: A protein is
something that is made up of mean old acids.

Teacher: What kind of tails do opossums have?"
Student:
Reprehensible ones"

Teacher: What is the spinal column?
Student: A long bunch of bones.
The head sits on the top and you sit on the bottom.

Teacher: How long does it take the Earth to rotate about its axis?"
Student: The Earth makes a resolution once every 24 hours.
Teacher:
That's wishful thinking.

Footnote:
Will and Guy lament that all the good chemistry jokes Argon