What is it about pigs that generates so much mirth?  Even when you see
live pigs they always seem to be up to mischief, or have just returned from
an adventure.

My friend, who is in farming at the moment, recently received a cheque for
£3,000 from the Rural Payments Agency for not rearing pigs. I would like to join
the 'not rearing pigs' business.

In your opinion, what is the best kind of farm not to rear pigs on, and which is
the best breed of pig not to rear? I want to be sure I approach this endeavour
in keeping with all government policies, as dictated by the EU under the Common
Agricultural Policy. I would prefer not to rear bacon pigs, but if this is not
the type you want not rearing, I will gladly not rear porkers. Are there any
advantages in not rearing rare breeds such as Saddlebacks or Gloucester Old
Spots, or are too many people already not rearing these?

As I see it, the hardest part of this programme will be keeping an accurate
record of how many pigs I haven't reared. Are there Government or Local
Authority courses on this?

My friend is very satisfied with this business. He has been rearing pigs for
forty years or so, and the best he ever made on them was £1,422 in 1968. That is
- until this year, when he received a cheque for not rearing any.

I plan to operate on a small scale at first, holding myself down to about 4,000
pigs not raised, which will mean about £240,000 for the first year. As I become
more expert in not rearing pigs, I plan to be more ambitious, perhaps increasing
to, say, 40,000 pigs not reared in my second year, for which I should expect
about £2.4 Million from your department. Incidentally, I wonder if I would be
eligible to receive tradable carbon credits for all of these pigs not producing
harmful and polluting methane gas?

Another point: These pigs that I plan not to rear will not eat 2,000 tonnes of
cereals. I understand that you also pay farmers for not growing crops. Will I
qualify for payments for not growing cereals to not feed the pigs I don't rear?

I am also considering the 'not milking cows' business, so please send any
information you have on that too. Please could you also include the current Defra advice on set aside fields? Can this be done on an e-commerce basis with
virtual fields (of which I seem to have several thousand hectares)?

In view of the above you will realise that I will be totally unemployed, and
will therefore qualify for unemployment benefits.

I shall of course be voting for your party at the next general election.

How Not to Celebrate a
Wedding Anniversary

Old farmer Jethro and his wife Aggie were walking down to their pig-pen
when Aggie dropped into the conversation that next month was their golden
wedding anniversary.

Aggie continued, 'Let's have a party, Jethro, and invite all our children
and grand-children. And why don't we kill one of our prize pigs to
celebrate?'

Jethro thought about this and scratched his head and replied. 'Gee,
Aggie, I don't see why that pig should take the blame for something that
happened fifty years ago.'

Karl Put His Foot In It

In a small town just south of Hicksville, seven pig farmers from the
surrounding area met to discuss important topics, such as boundaries, the
price of feed, and who has the best tractor.  After a while Jessie one
of the farmer's wives, interrupted the meeting and spoke about the need to
prudent at this time.

When she had finished, Karl one of the old farmers stood up and said,
'What does Jessie know about anything?' I would like to ask her if she knows
how many toes a pig has?'

Quick as a flash, Jessie replied, 'Why, take off your boots Karl, and
count them yourself!' 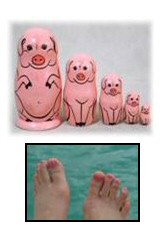 Here is simply the most wonderful children's nursery rhyme.  The
trick is to tickle the child's toes as you recite the verse:

The words for 'This little piggy' nursery rhyme are used to point out
each one of the child's toes. The last line in 'This little piggy' is
used to accompany the child being tickled by the narrator of the poem.
This rhyme is extremely popular which ensures that it will be passed
from generation to generation.

The first publication date for the words and lyrics for this nursery
rhyme was in 1728.

Will remembers playing 'This Little Piggy Went to Market' with his
children when they were young.

Trivia About Hogs, Pigs and
Swine 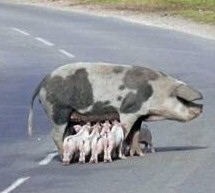 The phrase "sweating like a pig" actually has nothing to do with the
animal that you might find on a farm. Instead, it refers to iron "sows" and
"piglets" made when smelting pig iron. In traditional iron smelting, liquid
iron is poured into a mould shaped like one long line with many smaller
lines branching off of it at right angles.

This looks similar to piglets feeding from their mother, so these pieces
became known as pigs. After the pigs are poured into the sand, they cool,
causing the surrounding air to reach its dew point and turn into moisture on
the pigs, like they are sweating. When the pig is sweating, it's cool enough
to be moved.

Footnote:
Please send us your funny pig stories and
pictures.