Will and Guy are both qualified schoolteachers - History and Science
respectively - what we have found is there are three kinds of mathematicians;
those who can count and those who can't.

Mr Robbins, the math teacher asked his student, 'What is the full
form of Maths, Rebecca?'

Appendix
Why do Americans call it Math?
Yet the older generations of British refer to this subject as Maths?
Could it be because despite the ravages of age, we can still perform
multiple maths calculations in our heads, because they were drummed
into us 50 years ago? 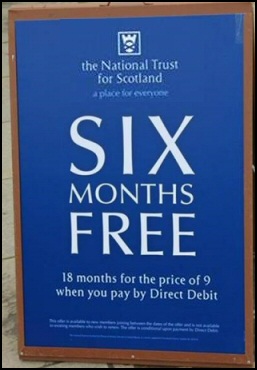 1957 - Robbie sent to office and given 6 of the best with a cane by the
Principal. He returns to class, sits still and thinks twice about
disrupting class again.

2014 - Robbie given huge doses of Ritalin. Becomes a zombie. Tested for
ADHD. Robbie's parents get fortnightly disability payments and School gets
extra funding from government because Robbie has a disability. 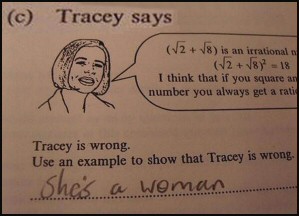 Yesterday I was having some work done on my car at
the Ford dealer.  While I was talking to Bert, the mechanic, a woman came in and asked for a seven-hundred-ten.... We all looked at each other, and the Bert asked, 'What is a seven-hundred-ten?'

Bert gave the woman a piece of paper and a pen and asked her to draw what the piece looked like. She
drew a circle and in the middle of it wrote 710. He then took her over to another car which had the hood up and asked, 'Is there a 710 on this car?'