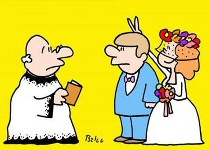 Will and Guy's collection of amusing and sometimes funny matrimony yarns and
jokes.

Marriage is the chief cause of divorce.  Groucho Marx

Linda Wolfe, aged 68, who
was first married at the age of 16, admits she became 'addicted to the
romance' of getting hitched. Will and Guy note that grandmother, with 23
ex-husbands, has been recognised as the most married woman in the world. Mrs
Wolfe from Anderson, Indiana, USA can no longer list her husbands in order
but remembers the nicest was a Mr George Scott, her first and, at seven
years, her longest marriage.

We find it amusing to record that she has
been single now for 12 years, her longest stint unmarried since childhood,
'But I would get married again,' she told us laughing, 'because, you know,
it gets lonely.'

Her last
marriage, a decade ago, was a publicity stunt. It was to Glynn Wolfe, who in
taking Linda as his bride meant he was the world's most married man, at 29
times. He died a year later aged 88.

A Pack of Playing Cards?

They say that marriage is like a deck of cards, you start out with two
hearts and a diamond, and end up with a club and a spade.

Hooligans had set fire to a farmer's haystack which then spread to his barn.

While he surveyed the wreckage, his wife 'phoned their insurance company
and asked them to send a check for £30,000, [$60,000 USD] the amount of
insurance on the barn.

'We don't give you the money,' a company official explained. We replace the barn and all the equipment in it.'

'In that case,' replied
the wife, 'cancel the policy I have on my husband.'

If Your Wife is a Nag

Will and Guy have discovered an allegedly true but outrageous marriage
story.

Hitting on the novel idea that he could end his wife's incessant nagging
by giving her a good scare, Hungarian Jake Fen built an elaborate harness to
make it look as if he had hanged himself. When his wife came home and saw
him she fainted.

Apparently on hearing a disturbance their neighbour came over and,
finding what she thought were two corpses, seized the opportunity to loot
the place.

As she was leaving the room, her arms laden, the outraged and suspended
Mr Fen kicked her stoutly in the backside. This so surprised the lady that
she dropped dead of a heart attack.

We can confirm that Mr Fen was acquitted of manslaughter and he and his
wife have been reconciled.

After a wild night of drink, drugs and debauchery, Bill woke up to find himself
next to a really ugly woman. That's when he realised he had made it home
safely.

Stick with the first 30 seconds of this amazing

Note from Guy, when Will researches and

recommends a video, it's worth watching.

'Marriage is a relationship in which one person is always right, and the
other is usually the husband.'

When our lawn mower broke and wouldn't run, my wife kept hinting to me
that I should get it fixed. Somehow I always had something else to take care
of first: the truck, the car, email, fishing, always something more
important to me.

Finally she thought of a clever way to make her point. When I arrived
home one day, I found her seated in the tall grass, busily snipping away
with a tiny pair of sewing scissors. I watched silently for a short time
and then went into the house. I was gone only a few minutes. When I came out
again I handed her a toothbrush.

'When you finish cutting the grass,' I said, 'you might as well sweep the
driveway.'

The doctors say I will walk again, but I will always have a limp.

Marriage Over the Years

Some people have strange views on the subject of
marriage

An elderly Italian man lay dying in his bed. While suffering the agonies of impending death, he suddenly smelled the aroma of his favourite Italian anisette sprinkle cookies wafting up the
stairs.

Gathering his remaining strength, he lifted himself from the bed. Leaning against the wall, he slowly made his way out of the bedroom, and with even greater effort, gripping the railing with
both hands he crawled downstairs. With laboured breath, he leaned against the doorframe, gazing into the kitchen. Where it not for death's
agony, he would have thought himself already in heaven, for
there, spread out upon waxed paper on the kitchen table were literally hundreds of his favourite anisette sprinkled cookies.

Was it heaven? Or was it one final act of heroic love from his devoted
Italian wife of sixty years, seeing to it that he left this world a happy man?

Mustering one great final effort, he threw himself towards the table, landing on his knees in a crumpled posture. His
parched lips parted, the wondrous taste of the cookie was already in his mouth, seemingly bringing him back to life.

The aged and withered hand trembled on its way to a cookie at the edge of the
table, when it was suddenly smacked with a spatula by his wife..... 'Back off!' she said, 'they're for the funeral.'

David, a young husband with an inferiority complex insisted he was just a
little pebble on a vast beach. The marriage counsellor, trying to be
creative, told him, 'If you wish to save your marriage, David, you'd better
be a little boulder.'

An insurance salesman was trying to persuade, Mrs Warren, a housewife, to
buy a life insurance policy.

'Just imagine,' he pronounced, 'if your husband was to die tomorrow, what
would you get?'

Only last week, in the local pub, I bumped into Ricky. We chatted over a pint and he surprised me by announcing,
'Mark, Rosie and I are getting a divorce.'

I was stunned, 'Why? What happened, you two seem so happy together.'

'Well,' Ricky stated, 'ever since we got married, Rosie has tried to
change me. She got me to stop drinking, smoking, running around at all hours
of the night and more. She taught me how to dress well, enjoy the fine arts,
gourmet cooking, classical music and how to invest in the stock market.'

'Are you a little bitter because she spent
so much time trying to change you?' I probed.
'Nah, I'm not bitter,'
Ricky continued, 'now that I'm so improved, Rosie just isn't good enough for
me.'

'Today is my wife's birthday,' announces Archie to his mate, Bert.

'What
are you getting for her?' enquires Bert.

'Make me an offer!' responds
Archie with a grin.

After a lengthy quarrel, Mandy said to her husband,
Dave, 'You know, I was a fool when I married you.'

Dave replied quickly, 'Yes, Mandy, but I was in love and didn't notice
it.'

Enid, the bride to be, upon her engagement, went to her mother and told
her, 'I've found a man just like father.'

Her mother replied, 'So, Enid, what do you want from me, sympathy?'

By all means marry. If you get a good wife, you'll be happy. If you get
a bad one, you'll become a philosopher...and that is a good thing for any
man. - Socrates

Personally I think one of the greatest things about
marriage is that as both husband and Father, I can say anything I want to
around the house. Of course, no one pays the least bit of attention.

If your wife laughs at your joke, it means you either have a good joke, or a
good wife.

'Is it true, Dad,' asked Laurence, that in ancient China, a man doesn't
know his wife until he marries.'

8. Influenza and the Wife: A Funny Short Tale

Peter came down with the 'flu and was forced to stay home one day.
He was glad for the interlude because it taught him how much his wife,
Sally, loved him.

Sally was so thrilled to have him around that when a delivery man or the
mailman arrived, she ran out and yelled, 'My husband's home! My husband's
home!'

9. Beauty and the Beast

Mrs Brown: Don't you think that man over there is the ugliest person
you've ever seen?

10. Clue to Happiness in Marriage

A Love Story from Cornwall, England

Jane and Mark Sharp-Hall's wedding was so very different since they and
their guests all dressed up as characters from the novel 'Alice's Adventures
in Wonderland' (commonly shortened to 'Alice in Wonderland').

Alice and the White Rabbit

They were married dressed as Alice and the White Rabbit from * Carroll's
1865 novel, while the best man came as the Mad Hatter and other guests
played the Queen of Hearts, Cheshire Cat, Caterpillar and 28 playing cards.

'This is the second time round for both of us and we did it traditionally
the last time so we thought we'd do everything a bit differently this time,'
said Mrs Sharp-Hall, who spent more than a year creating the costumes.

The couple married underground at Poldark Mine in Cornwall, where they
also enjoyed a Mad Hatter-inspired tea party - including little 'Eat
Me'cakes.

And Finally: This Is How Fights Begin in Marriage

A man who lives in Australia persuaded 40 of his friends and family to
make a human chain spelling out the words "marry me". Will and Guy do not
know if the woman involved agreed. Please inform us if you know.

Our overall philosophy on humour is variety, we have a mixture of amusing
videos, funny, yet clean jokes, mixed in with thought provoking pictures and the
odd story, the theme in this section is 'Funny Marriage Stories '.