One Farmer Who Clearly Does Not Have a Death Wish 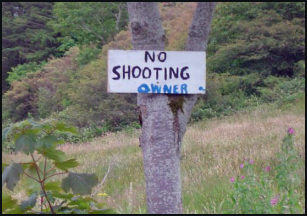 We have it on good authority that it was himself, the farmer, who following his own Irish logic, added the word 'Owner'.

Two Irishmen were out shooting ducks. One took aim and hit a bird which tumbled out of the sky to land at his feet. 'Ah, you should have saved the bullet," said the other.  The fall would have killed him, anyway.'

'What's in the bag?' asked Paddy 'I'm not going to tell', replied Murphy 'Go on, do.' pleaded Paddy. 'Ah, all right then, it's ducks.' announced Murphy 'If I guess how many ducks you have in the bag, will you give me one of them?' enquired Paddy 'Look', said Murphy, 'If you guess the correct number, I'll give you both of them.' 'Five!' said Paddy triumphantly.

Where Did the Bridge Go?  How Did That Bus Get Stuck There? 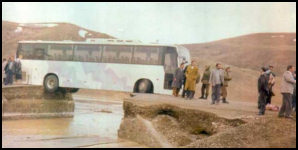 One Unlikely Explanation of the Bus on the Bridge

Darragh O' Malley was driving his lorry when he saw a bridge with a sign saying 10 foot maximum headroom. He slowed down wondering if he could drive under it or not. 'A shure I'll give it a go', he thought only to find that his lorry got stuck underneath it. Darragh sat back in his seat, poured out a cup of tea and lit a cigarette. A policeman arrived a short time later and knocked on the cab door which Darragh immediately opened. 'What do you think you are doing?' demanded the policeman in a sharp tone. 'Sure I'm having me tea break', replied Darragh. 'And what do you work at?' enquired the policeman. 'Agh shure, I deliver bridges,' smiled Darragh, 'and my lorry has run out of petrol.' 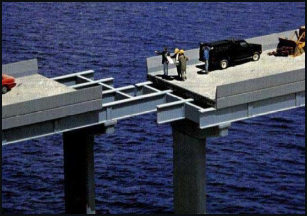 Normally the Irish are good at buildings.  After all it was McAlpine's who built the Pyramids and Giza, and Wimpey's constructed the Sphinx. However, their Irish logic seems to have had one too many pints of Guinness here. See China bridges.

Two Irishmen, Declan and Seamus were walking down a country road, when they saw a man hanging over a bridge with another mans legs in his grasp. The other man shouted up 'NOW, NOW' to his friend who promptly pulled him up. To Declan & Murphy's astonishment the man had a large fish in his arms. Declan and Seamus decided to give this plan a try, so they walked on to the next bridge where Declan dangled Seamus over the bridge. After five minutes Seamus started to scream up. Seamus: 'Declan, Declan PULL ME UP!!' Declan: 'HAVE YOU GOT A FISH?' Seamus: 'NO, THERE'S A TRAIN COMINING.'

Two Irishmen met and one said to the other, 'Have ye seen Mulligan lately, Pat?' Pat answered, 'Well, I have and I haven't.' His friend asked, 'Shure, and what d'ye mean by that?' Pat replied, 'It's like this, y'see...I saw a chap who I thought was Mulligan, and he saw a chap that he thought was me. And when we got up to one another...it was neither of us.' Footnote: Please send us your example of funny Irish logic